NY Times’ Headline Puts Dictator Castro to Rest: ‘A Man So Large in a Box So Small’ 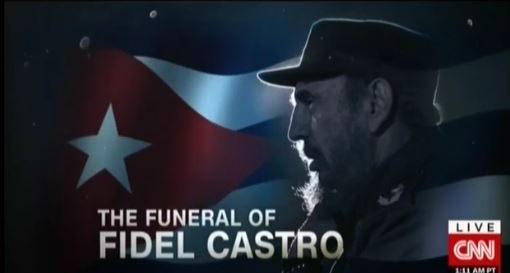 Bringing to an end nine days of national mourning, the ashes of Fidel Castro were buried on Sunday in a cemetery in this southeastern port city where, 63 years ago, he began his socialist revolution.

In contrast to many of the week’s memorial events, the brief funeral service, which followed a short cortege through the city and a 21-gun salute, was small and private. But according to government news outlets, a wooden urn containing Mr. Castro’s remains was slid into a niche in a mammoth granite boulder near the burial site of José Martí, the 19th-century Cuban poet and independence fighter, perhaps the only other native son held in such great esteem by Cubans.

The mourning period was a time of reflection for the nation as it considered Mr. Castro’s life and legacy, measuring the achievements of “Castrismo” against its undelivered promises.

As many Cubans are quick to do, [a psychology professor] extolled the virtues of the country’s free health care and education systems. Her father was from a poor family and became a manual laborer in the sugar industry at 15, before the revolution. But a generation later, Ms. Dominguez and her two siblings earned university degrees -- thanks, she said, to Mr. Castro’s initiatives.

Once again the Times is fine with talking of Castro in benign terms, as an avuncular figure for his people.

Many spoke of Mr. Castro after his death on Nov. 25, at age 90, in terms befitting a father figure. But his long illness, which compelled him to cede power to his brother Raúl Castro a decade ago, seemed to blunt the emotional impact of his death. The nation’s response was generally stoic, with public displays of unchecked emotion rare.

The government harnessed Mr. Castro’s death to reaffirm its socialist program, urging people to honor his legacy by redoubling their commitment to the ideals he espoused and the country he built. The government even placed logbooks in schools and other locations throughout the country and invited Cubans to sign an oath of loyalty to the revolution’s ideals.

The public events during the mourning period, as expected, drew vast, yet restrained, crowds. Perhaps the most dramatic homage was a three-day cortege that carried Mr. Castro’s ashes hundreds of miles to Santiago from Havana, reversing the route that he and his guerrillas took after overthrowing the forces of Fulgencio Batista in 1959.

Hundreds of thousands of people lined the route, with some traveling long distances and many hours for a glimpse of the modest convoy and the small, flag-draped wooden box containing Mr. Castro’s ashes, which sat in a glass case on a trailer hitched to a military jeep.

For those who could not make it to the cortege route, the entire trip was covered live on television and radio, which was how most Cubans saw it. Among them was Maria Aleisy Hernandez Ruiz, 71, a retiree in Santa Cruz del Norte, who kept her television on for much of the week.

“A man so large in a box so small — it really impacts you,” she said. “He was such a big man, with his big chest.”

The cross-country caravan was bookended by two large memorial events, one at Revolution Plaza in the capital on Tuesday night and the other at Revolution Plaza in Santiago on Saturday night. Both were attended by heads of state from around the world and other high-level representatives of foreign governments, many from developing countries that admired Mr. Castro’s socialist idealism and pugnaciousness toward the United States.

Later came the understatement of the year:

Dissent within Cuba was, unsurprisingly, muted.

At a gathering of students and faculty on the campus of the University of Havana to honor Mr. Castro, not everyone attended with an equal degree of conviction.

But voices like hers were overwhelmed by the outpouring of praise, often unbridled, for Mr. Castro and the country he built, however flawed.

In conversations across the country last week, many spoke about the country’s free health care and educational systems, the high literacy rate, the low infant mortality rate and the government’s efforts to combat racism. But Mr. Castro’s greatest legacy may well be the deep and unyielding national pride he cultivated, in part by unifying the Cuban people against the common nemesis of the United States government and its trade embargo.