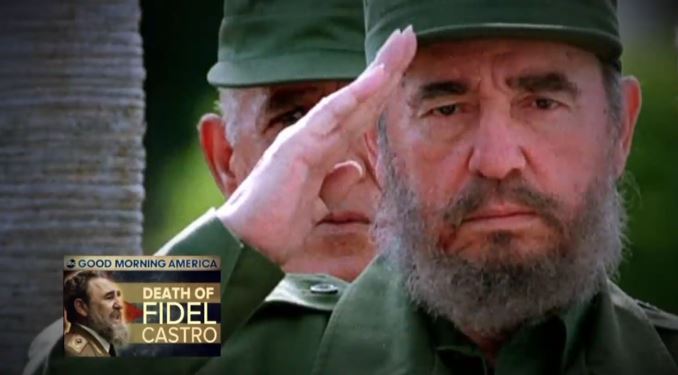 The New York Times has treated the passing of Cuba’s Fidel Castro less as the death of a dictator than the dying of a revolutionary dream.

Former Miami bureau chief Damien Cave’s off-lead story from Havana on Monday interviewed three generations of Cubans, but only came within glancing distance of the truth of the tyrannical leader, treating him more as an eccentric relative than a man who has jailed harassed and left impoverished three generations of his countrymen: “One Family. Six Decades. Myriad Views of Castro. Clashing Emotions of 3 Cuban Generations Reflect Faded Loyalty to Revolution.”

When Fidel Castro rode victoriously into Havana on Jan. 8, 1959, Juan Montes Torre rushed into the streets to cheer. A poor, uneducated laborer from the eastern countryside of Cuba, he had arrived in the capital a few years earlier and, like most of his neighbors, could hardly believe what was happening.

The Montes family’s story of faith and disillusion is common. Cuban families have been arguing about Mr. Castro since he came to power. His death has again produced an intense clash of emotions for many Cubans who recognize that he was more than just a political figure. He was also a brother, a father and a grandfather to various Cuban generations -- a familiar presence whose ideals, whims and ego shaped everyone’s identity and daily life.

Whether they wanted him around or not, Fidel was there, with his four-hour speeches, his billboards and the grandiose absolutes -- “Socialismo o muerte!” (“Socialism or death!”) -- that helped produce early triumphs in education and health care, along with restrictions on speech and assembly and, later on, persistent economic failures.

His relationship to the country was remarkably personal. Robert A. Pastor, a former Latin America adviser to President Jimmy Carter, used to say that Mr. Castro was one of the few world leaders referred to by just their first names. Many Cubans have grown comfortable with calling him a complicated relative.

Yet Mr. Castro was not exactly a common loved one. He was also the maximum leader -- charismatic but quick to anger, a guerrilla whose name Cubans were often afraid to utter. Because he ruled for decades, Mr. Castro’s impact -- and the perception of it -- changed over time. Cubans born before the revolution saw him as a transformative force for good or ill. Those born later, especially after the Soviet Union started collapsing in 1989, tend to view him as an obdurate barrier to economic opportunity and to integration with the rest of the world.

From the outside, especially in Washington, Mr. Castro seemed to be upending Cuba’s justice system, summarily executing opponents and filling Cuban jails. Mr. Montes, however, said he had seen a police force once viewed as a collection of corrupt thugs becoming professional. From 1959 to 1962, Mr. Montes said, Cubans all over the country were eager to serve Mr. Castro.

But there were enemies close by -- mostly wealthier Cuban exiles who had fled when Mr. Castro began nationalizing property. They had the support of the United States, and when their attack came at the Bay of Pigs on April 17, 1961, Mr. Montes was guarding the home of Celia Sánchez, a famous guerrilla fighter and Mr. Castro’s longtime lover and confidante.

The middle portion was devoted to the son Juan Carlos, less enamored of Castro and his revolution, while obsessing over the “economic inequality” that comes with economic and personal freedom.

Success, then, has tended to play favorites. Economic and racial inequality, after improving in the early years of the revolution, has gotten worse since the 1990s. Cubans with small businesses and more lucrative jobs in tourism are typically lighter-skinned, with advantages built up over time. Some have relatives in Miami. Others have connections in government or, in the case of Juan Carlos, Spanish ancestry and a home in Vedado with extra space.

Then the granddaughter, somewhere in the middle:

Rocio dreams of becoming an art historian. Tall and thin, she described Cuba with the nuanced sophistication that comes from a good education and plenty of time to think things through. In her eyes, Cuba is purgatory, and even before he died, Mr. Castro was a specter of the past, studied in textbooks more than seen.

“Fidel had an enormous vision,” she said.

And, yes, there a lot of things she said she loved about Mr. Castro’s Cuba: the breezy liberty of the streets, crime-free and rarely snagged with traffic; the emphasis on education and culture. She said she sometimes feared that violence would return once Fidel and Raúl Castro were gone.

When Cave was the paper’s Miami bureau chief, he was obsessed over hypothetical “inequality” that might transpire in a freer Cuba, a country where only the Communist apparatchiks have wealth. Cave also took a shot at "stiff-backed critics of Fidel’s government" while downplaying his dictatorial reign and put a favorable spin on Castro's brand of communism: “Equality and sovereignty are among the most cited virtues by young, passionate Cubans following in Fidel’s academic footsteps.”

As Miami bureau chief, Cave pushed that city's Cuban-American community to rid themselves of its fixation on Castro's Communist tyranny and start voting Democrat like other minority groups. An August 2011 story from Havana fretted that allowing Cubans to own their own homes could result in, gasp, "disparities of wealth."

Exemplifying the Times’ persistent refusal to comprehend leftist tyranny, Nicholas Casey managed to do a wrenching report on the latest tragedy of Communism -- Venezuela’s boat people -- for Saturday’s front page, while failing to explain the authoritarian economic system that caused it: “Risking Lives to Flee Ruin – Hungry Venezuelans Flock to Boats as Economy Collapses.” There was only a single glancing mention in the 11th paragraph of socialism, with no indication that the system was what has led Venezuela to ruin:

And as Mr. Chávez’s Socialist-inspired revolution collapses into economic ruin, as food and medicine slip further out of reach, the new migrants include the same impoverished people that Venezuela’s policies were supposed to help.