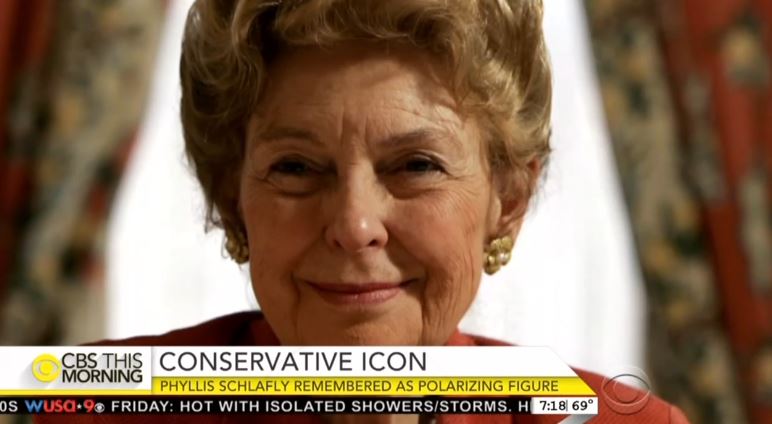 The Times and other media outlets generally file glowing obituaries for liberal figures, but Schlafly, the winner of the 2015 William F. Buckley Jr. Award for Media Excellence from the Media Research Center, received a somewhat hostile farewell -- a literal “hatchet job,” with Martin likening Schlafly to “ax-wielding prohibitionist Carry Nation” in the third sentence.

Phyllis Schlafly, whose grass-roots campaigns against Communism, abortion and the Equal Rights Amendment galvanized conservatives for almost two generations and helped reshape American politics, died on Monday. She was 92.

Her death was confirmed by the Eagle Forum, the conservative organization she founded in 1975.

In her time, Mrs. Schlafly was one of the most polarizing figures in American public life, a self-described housewife who displayed a moral ferocity reminiscent of the ax-wielding prohibitionist Carry Nation. Richard Viguerie, who masterminded the use of direct mail to finance right-wing causes, called her “the first lady of the conservative movement.”

On the left, Betty Friedan, the feminist leader and author, compared her to a religious heretic, telling her in a debate that she should burn at the stake for opposing the Equal Rights Amendment. Ms. Friedan called Mrs. Schlafly an “Aunt Tom.”

And in the 1970s, Mrs. Schlafly’s campaign against the Equal Rights Amendment played a large part in its undoing. The amendment would have expanded women’s rights by barring any gender-based distinctions in federal and state laws, and it was within hailing distance of becoming the law of the land: Both houses of Congress had passed it by a vote of more than 90 percent, and 35 state legislatures -- only three shy of the number required for adoption -- had approved it.

Without her and her followers, Mr. Critchlow said, the conservative intellectuals, research organizations and foundations that are often credited with reshaping the contours of American politics might have failed.

Even liberals conceded her impact. “If political influence consists in transforming this huge and cantankerous country in one’s preferred direction,” the political scientist Alan Wolfe wrote in The New Republic in 2005, “Schlafly has to be regarded as one of the two or three most important Americans of the last half of the 20th century” -- although he hastened to add that “every idea she ever had was scatterbrained, dangerous and hateful.”

Feminists said it was her husband’s wealth -- he was a lawyer from a rich Illinois family -- that had liberated her to politick.

Some opponents called Mrs. Schlafly a hypocrite for pursuing so energetic a career while championing traditional female roles. She replied by calling her political career “a hobby” and saying she would never offer an opinion on whether women should or should not work outside the home.

Other detractors, like Karen DeCrow, a former president of the National Organization for Women, praised Mrs. Schlafly even as they castigated her politics.

Still, Mrs. Schlafly’s pronouncements drove her antagonists to distraction, though they suspected that her biting language was calculated precisely to provoke their outrage. She said that “sexual harassment on the job is not a problem for virtuous women” and that “sex-education classes are like in-home sales parties for abortions.” She called the atom bomb “a marvelous gift that was given to our country by a wise God.”

In 1980, a protester threw an apple pie in her face at a Women’s National Republican Club reception in New York, painfully scratching an eye.

But Mrs. Schlafly was never outwardly ruffled. When Ms. Freidan, during a debate at Indiana University in 1973, recommended that she burn at the stake, Mrs. Schlafly replied in an even voice that she was pleased Ms. Friedan had said that because, she said, the comment had made it plain to the audience just how intolerant “intemperate, agitating proponents of the E.R.A.” were.

Martin gave a flavor of Schlafly delighting in ribbing her feminist opponents.

“I want to thank my husband, Fred, for letting me come here” was a favorite opening for speeches. (“I like to say that,” she said, “because I know it irritates women’s libbers more than anything else.”)

But the writer Gail Sheehy suggested that Mrs. Schlafly had used marriage to liberate herself from paying jobs. “Phyllis Schlafly’s formula for the better life, then, is based on marrying a rich professional, climbing the pedestal to lady of leisure and pulling up the rope ladder behind her,” Ms. Sheehy wrote in The New York Times in 1980.

Then followed a rundown of Schlafly’s accomplishments, a tribute to a life of energy and influence, though that may not be what the Times intended. A few highlights:

Mrs. Schlafly was introduced to electoral politics in 1952, after Republicans had asked her husband to run for Congress. When he turned them down, Mrs. Schlafly, who was 27, volunteered in his stead. She won the Republican primary but lost the general election.

That experience, she said, helped her overcome her natural shyness, and she went on to make dozens of speeches in Illinois as an officer of the Daughters of the American Revolution and to start building a national network of conservative friends. She was the president of the Illinois Federation of Republican Women from 1956 to 1964.

In 1958, she and her husband started the Cardinal Mindszenty Foundation -- named for the Roman Catholic leader who was tortured and imprisoned by Hungarian Communists -- to educate Catholics on the dangers of Communism. Beginning in 1962, she hosted a 15-minute radio show on national security called “America Wake Up.” It was carried by 25 Illinois stations.

Even in an obituary, Martin couldn’t lay off the smears.

In 1964, Mrs. Schlafly was an active supporter of Goldwater’s presidential campaign. In her self-published pocket-size book promoting his candidacy, “A Choice Not an Echo,” she contended that Republican presidential nominations were rigged by “secret kingmakers.” By some estimates, the book sold as many as 3.5 million copies.