NY Times Shows Sanders the Door: Suspicious Concern Over His 'Legacy' and 'Questions of Character' 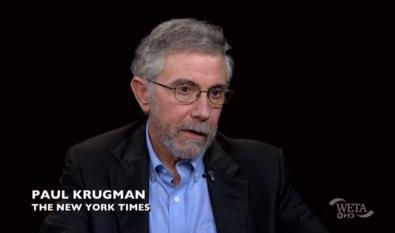 In columns, blogs, and front-page stories, the New York Times continues to edge left-wing firebrand Bernie Sanders out the door, apparently to clear a path for Hillary Clinton to gain the Democratic nomination as painlessly as possible. Columnist Paul Krugman is a reliably partisan hater of Republicans and cheerleader for Democrats, and he’s been enraging “Bernie Bros” for quite a while on his blog. Last week two entries, one under the loaded headline “Questions of Character.” And he’s not talking about Hillary:

Like a lot of people, I was shocked by the statement Bernie Sanders put out about Nevada. No hint of apology for his supporters’ behavior, lots of accusations about a “rigged” process when the issue in Nevada was whether Clinton should get more delegates in a state where she won the vote. And the general implication that the nomination is somehow being stolen when the reality is that Clinton won because a large majority of voters chose to support her.

But maybe we shouldn’t have been shocked. It has been obvious for quite a while that Sanders -- not just his supporters, not even just his surrogates, but the candidate himself -- has a problem both in facing reality and in admitting mistakes. The business with claiming that Clinton only won conservative states in the deep South told you that; and even before, there were strong indications that he would not accept defeat gracefully or even rationally.

Another post braced for Clinton’s expected losses in that week’s Democratic primaries in Oregon and Kentucky while attacking both Sanders and his "very white" supporters.

Not for the nomination. Clinton has won -- her big victories in the mid-Atlantic states ended any chance that Sanders can catch up on pledged delegates or popular vote, and he’s not going to convince superdelegates to overturn the will of the voters....

Then Krugman slammed down the race card.

This is very much true even if he wins both primaries tonight. KY and OR are both very favorable states for Sanders, basically because they’re very white....

Sanders could end all of this at any point. He doesn’t even have to drop out, all he needs to do is talk honestly about the realities -- and clearly condemn the kind of behavior we saw in Las Vegas over the weekend. But I’m losing hope that he will ever do the right thing.

Maureen Dowd’s column “Weakend at Bernie’s” (get it?) actually used “socialist” as a bad word in defense of Hillary Clinton.

....[Hillary] is reduced to stomping her feet on CNN, asserting her dominance in a contest that has left her looking anything but dominant. Once more attempting to shake off the old socialist dude hammering her with a sickle, Clinton insisted to Chris Cuomo on Thursday: “I will be the nominee for my party, Chris. That is already done, in effect. There is no way that I won’t be.”

Dowd circulated as fact an anti-Sanders talking point that’s unsubstantiated: That Sanders’ supporters threw chairs at the Nevada convention after some of their candidates’ delegates were muscled out of voting.

Sanders condemned the violence while stoking the outrage, urging the Democratic Party to “open the doors, let the people in.” He flashed a bit of Trump, so sure in his belief that the system is rigged that he fed off the nasty energy.

Boxer had to call Sanders several times before he called back. She and other Democratic Senate women are fed up with his crusade, feeling enough is enough.

It culminated with a front-page story Monday that framed Sanders’ socialist candidacy in a flattering way, if only to get him to drop out and thus avoid ruining his leftist “legacy”: “Fixated on campaign Fight, Sanders Risks Lasting Legacy.”

Congressional candidates who speak of “liberating the American underclass” are flush with campaign donations. The likely Democratic presidential nominee has not only moved to the left on a range of issues, but now routinely rails against the influence of “big money.”

There are plenty of signs that Senator Bernie Sanders of Vermont has left a mark on the political moment. But some liberal Democrats are beginning to worry that as Mr. Sanders continues his quest for the nomination, his chance to build a lasting legacy may be slipping away.

Far from laying the foundation to transform his campaign into a movement, Mr. Sanders is wrapped up in the race itself, sharpening his attacks on Hillary Clinton and demanding she debate him before the June 7 primary in California. And many of his supporters are following his cue.

In an ugly series of events this month that, if nothing else, showed how difficult they may be to herd, Sanders supporters disrupted the Nevada Democratic convention and later threatened the state party chairwoman in a fight over delegates.

Even if he does try to redirect the energy behind his candidacy into a new liberal organization, the task may not be easy. His campaign has brought together disparate individuals and volunteer groups that might be inclined to go their separate ways after the primary. His regular diatribes against the influence of big money in politics could make it awkward, if not impossible, for him to raise money from wealthy liberals.

And Mr. Sanders himself does not have a reputation for leadership; in Congress, he is seen as more of a lone wolf, known more for introducing symbolic legislation than for methodically building constituencies.

Yet even while criticizing his style and judgment, the Times still tiptoed around labeling Sanders’s left-wing views, patting him on the back for raising them (while shoving Sanders himself out the door).

Mr. Sanders has inspired candidates pushing policies like tuition-free public colleges and universal health care, initiatives that were once regarded as radical but that now have the support of many millions of Americans. Echoing the senator’s fiery tone, Democrats from his wing of the party are regularly railing against billionaires, lamenting the disappearing middle class and demanding reforms to campaign finance laws.