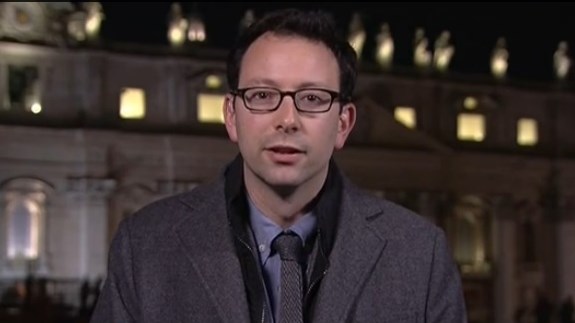 Colorful New York Times political reporter Jason Horowitz let his left-wing ideological flags fly with three stories on consecutive days --a "venemous" Donald Trump rally, a cyptically hostile Carly Fiorina profile, and a chiding of Bernie Sanders for being insufficiently fiery on gay rights in the 1990s. Horowitz held Fiorina's childhood continent-hopping against her candidacy: "That family pedigree and worldly past is politically inconvenient in a campaign climate that prizes anti-establishment outsiders and a strong dose of nativism."

They looked as if they didn’t belong.

Seven students from Columbus Alternative High School filled a pocket of space in a cavernous hall of the city’s Convention Center on Monday night. They had come for a Donald J. Trump rally, but they looked as if they would be more at home at a casting call for the television show “Fame.” The group included a boy in skinny jeans who wore a wool hat and kept the fingernails on his right hand long and manicured, a girl with the sides of her head shaven, and two other girls wearing Marvel T-shirts and granny glasses.

They came to get extra credit for a history class. They were about to become part of the lesson.

Depending on which side of the Thanksgiving table one sits on, Mr. Trump’s run for the Republican presidential nomination is either the most refreshingly apolitical candidacy in ages or a steepening descent into unvarnished demagogy.

And while Mr. Trump’s heated language on surveillance of Muslims, accepting Syrian refugees and illegal immigration is firing up his crowds, it is also drawing more protesters, resulting in physical clashes.

The high school students came in. A little bit immature and more than a little garrulous, they laid down their bags and at times lay down, appearing like a multiracial island in a sea of white faces.

As Mr. Trump’s advance team seated three black people with the Trump fans behind the stage, the students and the supporters around them sang along to “Skyfall” by Adele. When the chorus of “Hey Jude” played, Mr. Trump’s supporters lifted and swayed “The Silent Majority Stands With Trump” signs. A couple wearing American flag shirts embraced.

To supporters seeing him up close, the Trump experience was very real. They locked eyes on him and nodded religiously when he talked about “anchor babies” cast by unauthorized immigrants, or the “animals and savages” perpetrating terrorism, or the “scum” on the streets. Guarded by a line of Secret Service agents under the stage, he made his fans howl with laughter and shake their heads in disgust at “stupid” leaders who use teleprompters.

Then, when Mr. Trump began talking about surveillance of refugees, the college-age couple standing in front of the students began chanting, “Hating Muslims helps ISIS.” The students were caught off guard, but after a moment of uncertainty, some of them joined in.

One of the high school girls said afterward that as they exited, people in the crowd had asked them, “If you don’t love America, why don’t you just leave?” and that a man had told her that if she had not been filming on her phone, he would have slapped her.

She and another student said they had heard an epithet for black people hurled their way.

Republicans got their share of physical confrontations at Obama rallies in 2008, without much concern from the New York Times.

Horowitz managed to make the garden-variety facts of Republican candidate Carly Fiorina's background and youthful traveling with her family sound vaguely disconcerting, in his Friday profile.

After a paragraph on her youthful years as "Carleton" in London and Ghana, Horowitz hit both Fiorina's peripatetic childhood and the "nativism" of the Republican field.

That family pedigree and worldly past is politically inconvenient in a campaign climate that prizes anti-establishment outsiders and a strong dose of nativism.

It also took a toll on her as a young woman moving from school to school around the country and the world, as the future marketer had to learn how to quickly make, if not keep, friends.

“It gives you a worldview,” Mrs. Fiorina said when asked in a brief exchange about her upbringing after another event in South Carolina. She otherwise declined to talk about it other than to portray her travels as an education in American exceptionalism. “I saw at a young age, as well as all of the other decades where I’ve traveled, that things are possible here that really aren’t possible anywhere else in the world.”

Horowitz dug up some voices from the past to get in their own silly digs.

Girls in brown berets and jackets rebelled by rolling up the waistbands of their hated Harris tweed brown skirts and were rewarded for good posture with badges. Some classmates recalled Mrs. Fiorina’s name more than anything she said or did.

“We had never heard of anyone called Carleton before,” said Claudia Mayer. “Sneeeed. It’s almost Dickensian in a way.”

Mary Livingstone Farrell recalled being brought to one of Mrs. Fiorina’s many parties by a date.

“It was almost like the parents were absent,” she said. At the party and at school, she said, Mrs. Fiorina made it clear “she thought she was way smarter than we were.”

Even a mildly critical profile of Sanders on Saturday chided the Democratic candidate from a far-left gay-rights perspective. Horowitz accused both Sanders and Hillary Clinton as "airbrushing" their history on the issue, and Sanders for not being not on the frontline in the early skirmishes: "Sanders an Uneven Ally in Fight for Gay Rights."

As Senator Bernie Sanders tries to distinguish himself from Hillary Rodham Clinton and rally his progressive base, one issue where he has claimed a clear advantage is in the long battle over gay rights.

But on his home turf in Vermont, the first state to recognize civil unions and a trailblazer in same-sex marriage rights, gay rights advocates say Mr. Sanders was less than a leader, and not entirely present, on the issue.

Mr. Sanders, who first publicly endorsed gay marriage in 2009, expressed varying levels of support for gay rights as he rose from the mayor of liberal Burlington to a congressman and then a senator with statewide support among more socially conservative constituencies such as hunters, blue-collar workers and older voters.

Unlike his colleagues, Horowitz is willing to identify Sanders's "radical leftist politics." Perhaps he doesn't have a problem with those politics?

Mr. Sanders’s modulation on the issue, those who have watched his career say, is a reflection of both his single-minded focus on economic inequality and his deftness as a politician, a side of him that runs counter to his reputation for ideological purity and uncompromising liberalism.

Mr. Sanders is not the only Democratic candidate airbrushing his history on gay rights.

In recent weeks, Mrs. Clinton has sought to characterize her husband’s signing of the bill as a “defensive action” against more ambitious anti-gay legislation. Gay rights advocates have called that revisionist history.

The record Horowitz laid out suggests Sanders supported gay rights, but that it simply wasn't his top priority as an econcomic socialist.

Horowitz was positively reverent in a profile of Sanders penned on the eve of the first Democratic debate.