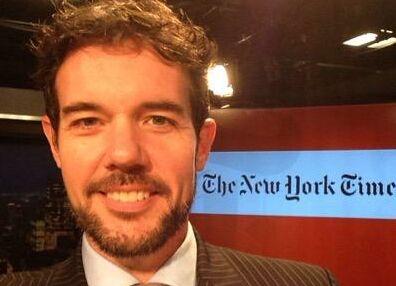 Hillary Rodham Clinton falters, and Republicans ride to her rescue.

When White House controversies dogged Mrs. Clinton as first lady, the independent counsel Kenneth W. Starr made her sympathetic with his Javert-like investigations. When Mrs. Clinton showed flaws during her 2000 Senate race, Rudolph W. Giuliani and Rick Lazio looked even worse to many New Yorkers. And when the attacks on American diplomats in Libya sullied her record as secretary of state, Republicans struck many viewers as overreaching when they badgered her at a televised hearing.

In comparing Ken Starr, whose investigation of Bill Clinton's myriad scandals both financial and personal led to the president's impeachment, to Inspector Javert, the obsessed antagonist of Les Miserables, Healy is using a comparison the Times itself called "White House spin" in an editorial during the Monica Lewinsky scandal in 1998.

Now, as she seeks the Democratic presidential nomination, Mrs. Clinton is struggling with declining poll numbers, questions about her honesty and doubts about her ultimate electability. And once again, her Republican rivals are allowing her to turn their own words against them in ways that could help win over some of her skeptics.

By branding Mexicans as rapists, calling the children of immigrants “anchor babies,” denouncing abortions for rape and incest victims, and threatening to shut down the government over federal aid to Planned Parenthood, Republicans are giving Mrs. Clinton political help as she tries to divert attention from her woes and bounce back from a politically challenging summer.

Several Democratic Party officials with qualms about Mrs. Clinton, for instance, said she had reassured them about her political acumen and fighting form with a fiery speech Friday that assailed Donald J. Trump over his “hateful” remarks about immigrants, Senator Marco Rubio on his unwavering opposition to abortion, and Jeb Bush for saying he was not sure “we need a half a billion dollars for women’s health issues.”

So "fiery" is good and excitement-building for Hillary Clinton when she's calling Republicans terrorists and invoking Holocaust imagery, but when Republicans inject mild criticism against Hillary into the discussion, it's a dangerous gaffe?

Kate Gallego, another of the 713 Democratic superdelegates who have outsize power over the nomination, said she had decided to support Mrs. Clinton because of the way she took on Republicans in her speech. “It was energizing for me to hear Secretary Clinton say, ‘If equal pay for equal work is playing the “gender card,” then deal me in,’ ” said Ms. Gallego, who is from Arizona.

Using one’s adversaries’ words against them is nothing new -- Mr. Bush is doing it to Mr. Trump in a new video. But Mrs. Clinton faces 17 Republican candidates who are so fractious that their attention-grabbing positioning, while appealing to Republican primary voters, may alienate general election voters in swing states like Florida and Colorado.

On Tuesday, Mr. Bush said, “The federal government shouldn’t be involved in gun laws” -- a comment that, like his opposition to citizenship for undocumented immigrants and his use of the term “anchor babies,” may haunt him if he is the Republican nominee, Clinton advisers argue. (Mr. Bush, in making the comment, said the fight against gun violence should focus on identifying people with mental illnesses.)

Over and over, Republicans have helped Mrs. Clinton to be successful in spite of herself, as some in their party acknowledge.

Attacking the Republicans is not just an applause-line strategy, though. Clinton advisers are bent on making the presidential race into a so-called choice election -- between Mrs. Clinton and a Republican opponent (and their respective policies and visions) -- rather than a referendum on Mrs. Clinton, which would be a harder fight for Democrats to win.

Mrs. Clinton also risks overreaching, however. Last week on Twitter, for instance, her campaign said, “How do Jeb Bush and Donald Trump differ on immigration? Spoiler alert: They don’t” -- even though Mr. Bush has criticized Mr. Trump’s support for deporting illegal immigrants and repealing birthright citizenship. Some political fact-checkers dinged the Clinton assertion as mostly false, while a Bush spokesman said her attacks on Republicans would ultimately backfire.

But for now, her supporters believe, the more Mrs. Clinton rakes Republicans over their own coals, the better chance voters will put aside misgivings about her and consider whether their views are closer to hers or to those of the Republicans.