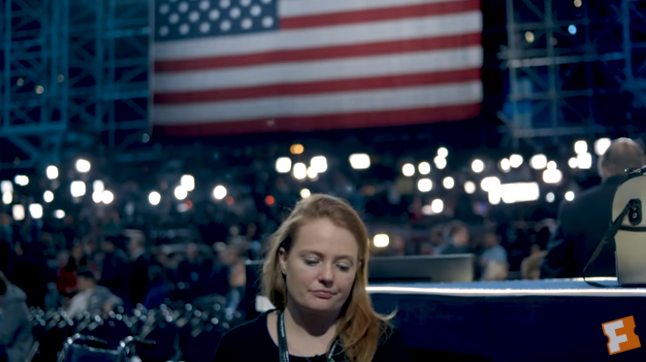 The documentary, available now via iTunes, select theaters and Netflix, is a revealing look at our divided nation all the same. Only it shares more than the filmmakers likely intended.

The movie assigned 18 directors to focus on people across the political and cultural spectrum on Nov. 8, 2016 – Election Day. Naturally, the movie leans left. The anti-Trump voices get more screen time. The pro-Trump voices aren’t as eloquent, or passionate, as you expect.

Donald Trump fans will find the film’s final moments triumphant all the same. Hillary Clinton devotees? They may need safe spaces stocked with coloring books to survive this electoral repeat.

Curated by Jeff Deutchman, the documentary lets the subjects shape the narrative over the course of the historic day. The creative team didn’t stretch beyond the obvious stereotypes to find the subjects. The Trump fans come from Blue Collar USA, while the Clinton voters are mostly from urban regions.

We meet a Sikh cab driver worried a Trump victory will mean more Islamophobia. A woman who films video snippets for the Clinton campaign can’t wait to see the glass ceiling shards fall later in the day.

A coal miner thinks a Trump win will do wonders for his industry. A Massachusetts businessman hopes the reality show star will lower taxes. The Trump voters aren’t an effective voice for his side. The business owner’s views on sexual politics is borderline dense.

A group of Illegal immigrants fear what might happen if a president comes to power willing to enforce the law.

The narrative trots out the usual Trump slams – misogyny, bigotry, racism. You know, the same charges hurled at previous GOP candidates around election day. A better documentary would feast on that cultural point and how it factored into Trump’s victory.

Just don’t hold your breath waiting for it.

One of the more intriguing subjects is Christina Bellatoni, the assistant managing editor at The Los Angeles Times. (Full disclosure: Bellatoni and I worked together at The Washington Times years ago). Bellatoni is seen shaping her newspaper’s Election Day coverage, a task that grows thorny as the unexpected results roll in.

She looks physically ill as the realization those “Madame President” headlines won’t be needed. Even more revealing? She collects her composure as the reality of President Donald Trump sinks in but perks up when she hears about protesters gathering nearby.

Other media figures include hosts from WHYY, Philadelphia’s NPR affiliate. They hide their disgust better, although one broadcaster appears distraught late in the movie as the Trump train makes a victory lap.

One Man, One Vote

The most poignant subject is an older black man eligible to vote for the first time in 30 years. He was unjustly imprisoned on murder charges but is now free and eager to assume his rights as a citizen.

He’s gentle but excited, giddily wearing his “I Voted!” sticker on his forehead throughout Election Day. He takes his civic duty seriously. And yet by the end he’s unfairly blasting white people as a group, something he probably would recoil over had someone did the same to black Americans.

Another Clinton fan, a young hipster who despises her own country, gets a lesson in decency from her father. It’s a mesmerizing moment, hearing an older, wiser man deconstruct her far-left bromides. She can only listen and nod, like an Antifa “warrior” faced with some cold, hard truths.

Otherwise, 11/8/16 packs few surprises. It’s hard not to wonder what the assembled directors left out of the film. Did some of the Clinton supporters launch into hateful tirades?

What’s clear is how deeply entrenched victimhood is in our society. Some of the black voices captured here think the system is out to get them, ignoring how so many of their fellow black citizens climbed the ladder to success all the same.

Were they held back? Or did they do the hard work necessary to thrive in a capitalist culture?

Two of the assembled voices are stupefying in their inclusion. One is a homeless Hawaiian man who barely knows what’s happening with the election. He does supply the film with a gritty musical number in its waning moments.

The other, a radical left wing candidate from Vermont, just wants to stir up some trouble. He’s proud of his rabble-rousing tendencies, and for a while even conservatives might enjoy his pluck. Then he suggests the most responsible thing a person can do is commit suicide in order to stop using the earth’s resources.

Get that man an MSNBC gig!

11/8/16 doesn’t dig as deep as it should even though it’s rigorously entertaining. What’s revealed is scary enough. The documentary shows how voters both despise and crave Big Government.

It also reveals how the same Clinton supporters who decry MAGA types as racists harbor some pretty ugly sentiments themselves.