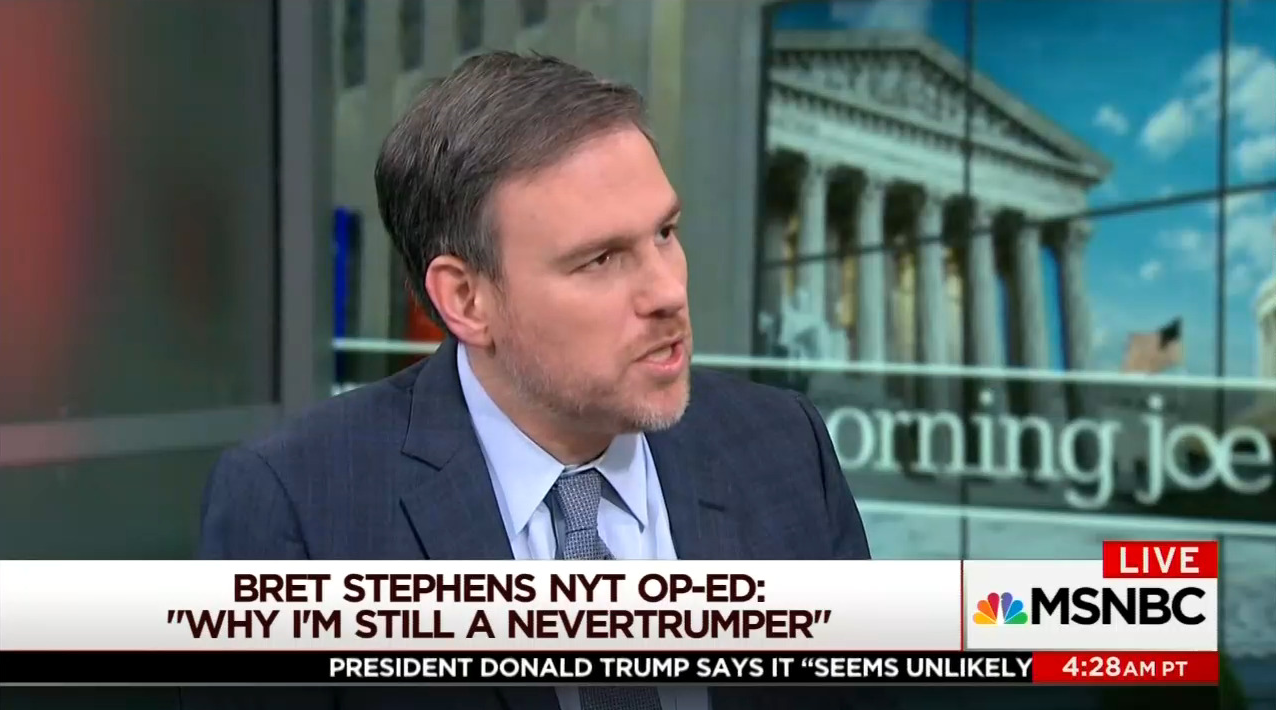 On Thursday’s Morning Joe, New York Times columnist Bret Stephens was brought on to promote his December 29 column explaining why he still considers himself to be an adherent of the “Never Trump” movement. In spite of expressing his agreement with many of the Trump administration’s actual policy positions, Stephens argued that Trump’s poor personal character and harsh criticism of the liberal media and FBI/DOJ leadership is “systematically corroding, corrupting, and [...] destroying our culture of governance” and thus negates any of his key political achievements.

Stephens also claimed that the President has been attempting to run the country along the lines of an authoritarian Latin American dictatorship by creating a “cult of personality” and specifically compared Trump to former Venezuelan president and socialist strongman Hugo Chavez.

Stephens’s column is a wonder in and of itself, as the NYT opinionator used it not only to call Trump’s character into question, but also to make the case that Hillary Clinton would have been a better president [emphasis mine]:

And, of course, Neil Gorsuch on the Supreme Court. What, for a conservative, is there to dislike about this policy record as the Trump administration rounds out its first year in office?

That’s the question I keep hearing from old friends on the right who voted with misgiving for Donald Trump last year and now find reasons to like him. I admit it gives me pause. I agree with every one of the policy decisions mentioned above. But I still wish Hillary Clinton were president.

How does that make sense? Can I still call myself conservative?

So, keeping in mind that Stephens apparently believes Hillary Clinton’s character would be a superior influence on American culture and government, take a look at how he went after Trump on Morning Joe:

MIKA BRZEZINSKI: Joining us now, columnist for the New York Times, Bret Stephens. And Bret, uh, you had a column, uh, last week that a lot of people were talking about. It was entitled: “Why I’m Still A NeverTrumper.” Um, explain what you arger-, uh, argued, especially as it pertains to the news in the past week.

STEPHENS: You know, look, if you look at what the Trump administration has done across a number of policies, I actually agree with many of them. I think corporate tax cuts are a good idea. I think we should be spending more on, on the military. I favored decertification of Iran or moving the embassy to Jerusalem. You -- we can argue about that, but those are policy questions. But, the essence of my Never-Trumpism comes down to what the President is doing to our political culture. And conservatives used to care about the culture. If you remember, twenty odd years ago, Bill Bennett came out with a book called “The Death of Outrage.” And of course, it was directed at Bill Clinton and what was happening then. But right now, you have a president who is systematically corroding, corrupting, and, in some respects, destroying our culture of governance. Basic things, uh, respecting the officers, uh, and the agents who serve him in our intelligence community in, uh, the, uh, in, in the FBI. Earlier in the program, you were talking about libel laws, basic fundamental responsibility to preserve, protect, and defend, uh, the constitution. The fact that, you know, as you, as you were mentioning, this is a president who lies five times a day. He lies voluntarily, involuntarily, knowingly.

BRZEZINSKI: [interrupting] And this is not normal and not good for our country.

STEPHENS: And, the -- what, what, what worries me, Mika, is that Trump isn't -- conservatives think they're gonna pocket a bunch of policy victories and then Trump is going to go away.

STEPHENS: Trump is gonna create a culture of governance that is going to stay with us for generations, and that’s what conservatives are really gonna rue.

In light of Stephens’s column singing Hillary Clinton’s praises, his pillorying of Trump as a liar in order to justify holding him in continued contempt strikes a very strange chord. It’s hard to take the idea seriously that Stephens would really have no problem with a Clinton presidency given that, even according to sources like Politifact, she has been a serial liar about issues of both minor and major significance, including everything from her many lies about her private email server to more comical incidents like her utterly false claims about dodging sniper fire on a Bosnian tarmac back in the mid-90s.

Co-host Brzezinski did not bring up any such concerns herself, of course. Instead, she turned over the questioning of Stephens to senior Morning Joe contributor Mike Barnicle, whose query ultimately prompted the Times columnist to make his Trump-Chavez comparison:

BARNICLE: And, and, and, and Bret, if you -- and I don't disagree with, with your belief. You've gotta worry about two things, don't we? We -- you've gotta worry about how long will it take, if it can be done, to repair the damage that is being done to our culture right now. And two: How dangerous is it when you have someone like the President doing what the President is doing on a daily basis multiple times when there are so many accessories before and after the fact? And I'm talking about the Republicans in Congress.

STEPHENS: It’s, it's a great point, Mike. You know, I think the, the damage is actually almost going to be generational. Look, a century ago, Argentina was one of the wealthiest and most modern countries, uh, in the world. How did Argentina go from that to, uh, uh, generations of political and economic, uh, decline? It attached to its-, itself to, you know, the famous cult of, of Peronism, which led to successive left-wing, right-wing governments, military governments, and a slow decline. So it's ironic that a president who wants to build a wall with Latin America is actually importing a style of cult of personality politics that is reminiscent of Juan Peron, or, or actually of, of Hugo Chavez, uh, as well. And that’s an irony I don’t think his, his supporters really, uh, appreciate.

Both Juan Peron and Hugo Chavez were infamous nationalizers who seized private property and businesses for the enrichment of their politically-connected friends in government and/or business, so it should surprise no one that one of the primary ways that they fostered their own cults of personality was by the wholesale expropriation of opposition media outlets. In the case of Chavez, according to Freedom House’s 2012 Freedom in the World report [emphasis mine]:

Although the constitution provides for freedom of the press, the media climate is permeated by intimidation, sometimes including physical attacks, and strong antimedia rhetoric by the government is common. The 2004 Law on Social Responsibility of Radio and Television gives the government the authority to control radio and television content. Opposition-oriented outlets make up a large portion of the print media, but their share of the broadcast media has declined in recent years. The television station RCTV’s terrestrial broadcast frequency and equipment was seized in 2007, based on what Chávez claimed were the station’s ongoing efforts to destabilize the government. In July 2010, the National Telecommunications Commission (CONATEL) stripped 32 radio stations of their licenses for what it described as procedural and administrative problems. Also during the year, the president of Globovisión, the primary opposition-aligned television broadcaster, was charged with several violations, prompting him to take refuge in the United States. In October 2011 Globovisión was fined $2.1 million for its reporting on a prison riot. Coverage of election campaigns by state media has been overwhelmingly biased in favor of the government; private outlets have also exhibited bias, though to a somewhat lesser degree.

None of Trump's actual policies or statements about the liberal media reporting fake news about him (which they frequently do) have come anywhere close to being morally comparable to Chavez’s well-documented abuses of press freedom. If Trump starts sending gangs of labor union goons to physically attack journalists or seize their equipment and TV studios, then perhaps Stephens will have a semblance of a point. In the meantime, his ridiculous hyperventilating about Trump should only be considered with great skepticism.