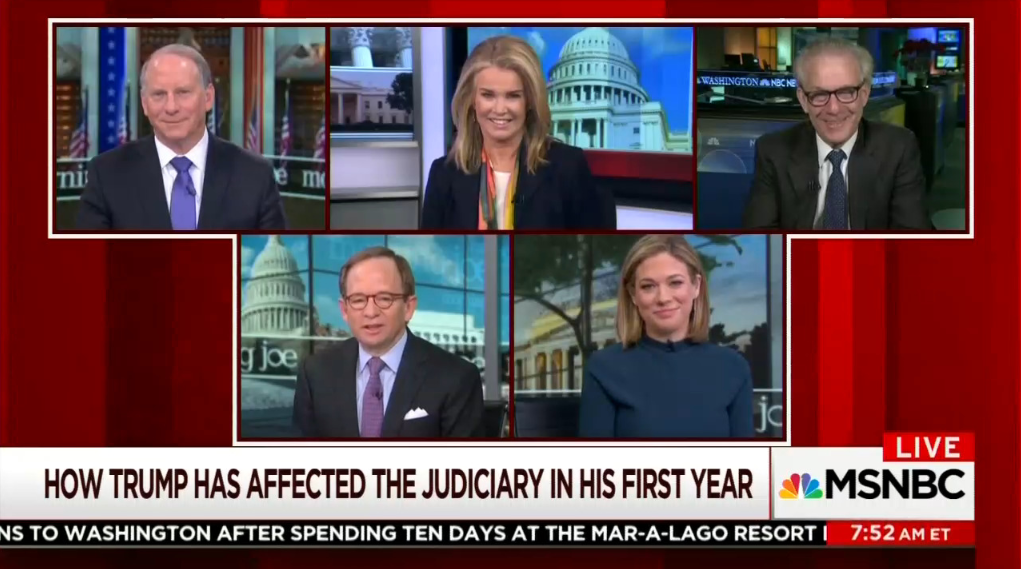 On Tuesday’s Morning Joe, economic analyst Steve Rattner used a series of charts and graphs to deliver a supposedly straight, facts-oriented report about President Trump’s federal judicial nominations to date. However, Rattner, who is also the Chairman and CEO of Willett Advisors LLC, the firm that manages former Mayor Michael Bloomberg’s various investments and philanthropic ventures, could not help but devolve into standard left-wing talking points impugning Trump as a racist patriarch looking to deliberately exclude non-whites and women from the bench.

Besides whining about the “far less diverse” crop of Trump nominees, Rattner also complained that Trump was deliberately selecting younger judicial candidates as part of some sinister, “very deliberate, calculated strategy to have them serve for a long time” and thereby “remake the federal judiciary.”

The segment in question began with BBC World News America anchor Katty Kay briefly introducing the subject of Rattner’s report and suggesting that it would be a “just the facts” kind of presentation:

KATTY KAY: One of the successes that President Trump typically lists for his first year in office is the confirmation of Neil Gorsuch to the U.S. Supreme Court. But what about those lower courts? How do his judicial nominees stack up against his predecessors? Well, it wouldn't be New Year without Steve Rattner and his charts. He’s gonna chart that for us this morning, which I guess proves you can chart just about anything, Steve.

STEVE RATTNER: Not quite anything, but we're gonna chart this, anyway.

Rattner then snarkily noted his implicit disapproval of the “successes” of Trump’s nominations to appellate and district courts before going on to give a relatively sober numbers-based assessment of precisely how many people Trump has gotten on the federal bench relative to former President Barack Obama:

So, look, I put “successes” in a little bit of quotes. But underneath North Korea and the tax bill and all the stuff that’s gotten the attention, he has had amazing success, and very carefully calculated success on nominating judges. So, if you look at the three levels of judges, as you mentioned, on the Supreme Court level, he, he and President Obama each have gotten one judge appointed -- uh, sorry, my little pen here isn’t working, there it go [sic] -- have each gotten one judge appointed. But when you drop down below that to the appeals court, the numbers are even more striking. He has nominated 19 to the, uh, court of appeals and gotten 12 approved, whereas Obama had nominated 15 and gotten only three approved at this point in the, uh, in the cycle. Now, some people would say: Well, that's because the, uh, Republicans control the Senate and only needs 50 votes. But Obama had 60 votes at this point in time during his administration and yet couldn't get as many confirmed. On the district court level, Trump has nominated 55 and gotten tw-, and gotten twelv-, uh, si-, I’m sorry, gotten six approved, and on the Obama side, nine out of 20. So he hasn't gotten quite as many approved on the district court level, but he's nominated a whole slew of them and they are in the queue.

At this point, Rattner’s judicial report began to deviate from a simple factual analysis. With the bold headline “Trump’s Judges Are Less Diverse” displayed at the top of the screen, Rattner made a point of highlighting the fact that Trump’s base of nominees are largely white and male:

And what’s also interesting to look at is the makeup of these judges, because they’re far less diverse than they were under previous presidents. 91% of Trump's nominees are, are white, are white. And that is the highest percentage, except for Reagan, of all the presidents over this period of time. And, and 81% of them are male, which is ahead of what -- larger number than what Bush II, Clinton, and Obama also appointed.

Even based on Rattner’s own charts, his claims stretch the truth of the numbers. Far from being some terrible misogynist discriminator with an axe to grind against female judges, Trump actually falls right in the middle of recent presidents in terms of nominating women to appellate and district courts. So far, Trump has nominated a greater percentage (19%) of female judges to the federal bench than both Ronald Reagan (8%) and Jimmy Carter (16%), the same amount as George H.W. Bush, and fewer than George W. Bush (22%) and Bill Clinton (29%). Obama is the real outlier of the group, with 42% of his judicial nominees having been women.

Moreover, while Trump’s nominees are overwhelmingly white, the recent U.S. presidents that Rattner looked at have all nominated mostly white candidates to the federal judiciary. Even with Obama, almost two-thirds of his nominees were white, and Clinton and Carter’s nominees were 75% and 79% white, respectively.

But what was the original point of Rattner’s complaints about too many white and male judges? Doesn’t it matter far more to figure out whether or not judicial nominees are competent and impartial legal arbiters? Do Rattner and his compatriots believe that white men are more reckless or unwise in their application of the law by virtue of their race and sex? Or was Rattner’s implication merely that Trump and all of the other presidents (including Obama) who have sought to appoint mostly white, male judges are involved in some sort of racist and sexist grand conspiracy?

They are also, if we look at the last chart, they are also a good bit younger than previous nominees. They average a little bit over 50 years old. You can see that Obama, George Bush, and Clinton all had older ones, the earlier presidents in roughly the same range. And this is also part of a very deliberate, calculated strategy to have them serve for a long time. And he has the opportunity to make really major changes in these courts. At the court of appeals level, half of the judges, fully half of the judges, are eligible for senior status, meaning that he could get to appoint them, whereas inder-, under Obama, only 27% at this point were eligible for senior status, 14% under Bush 43. So, there's a very deliberate and very well orchestrated campaign underway to remake the federal judiciary. These are, as a final reminder, life appointments.

Rattner’s delusions of some underhanded conspiracy to put infant judges into positions of inordinate power are, once again, belied by his own data. Part of the problem with Rattner’s analysis seems to stem from the misleading nature of the graph that he displayed to support his argument (see below). 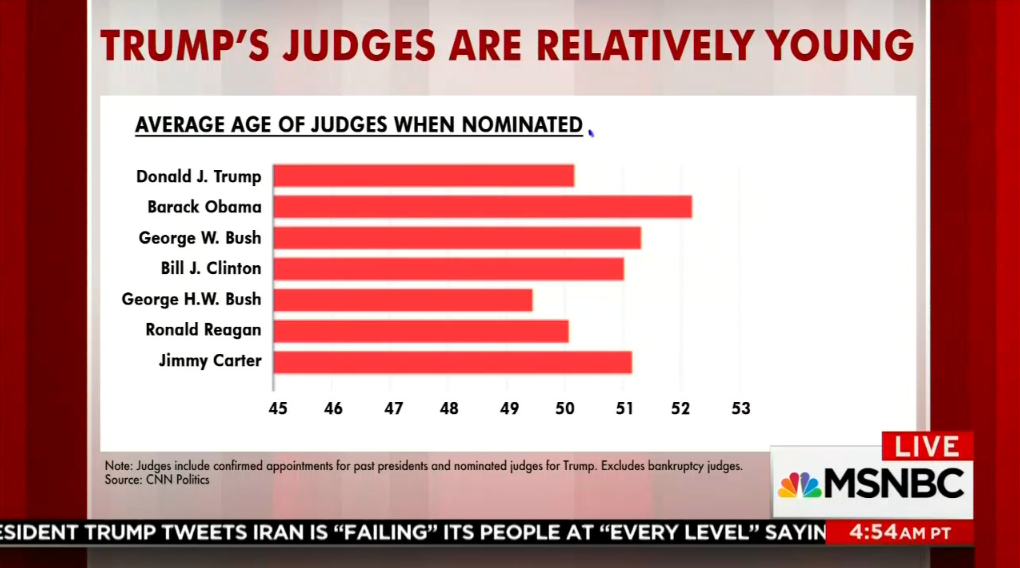 Because the x-axis is unusually truncated, what at first glance appears to be a relatively significant, if not massive, difference in the average ages of Trump’s and other presidents’ judicial nominees falls apart upon the most elementary inspection. What Rattner characterized as a “very deliberate and very well orchestrated campaign” by Trump to pack the federal benches with neophyte judges actually fits well within the pattern established by previous presidents.

Neither Kay nor any of her colleagues made note of Rattner’s rather shoddy statistical analysis. Instead, Kay agreed with Steve: “Right, and given that they're young, they outlast Trump, presumably.” Rattner echoed Kay by unhappily concurring: “They outlast Trump and several of his successors.”

This is not the first time that MSNBC has taken the opportunity to muse about Trump being a probable sexist and racist for not nominating more women and non-whites to the federal courts. Back on November 14th of last year, MSNBC anchor Stephanie Ruhle and Matt Miller, former Director of the Office of Public Affairs for Attorney General Eric Holder, balked at Trump’s nomination of too many “white,” “male” judges and suggested that Trump should hire more judges simply on the basis of their race and sex.