On Tuesday, Morning Joe did a special 10th Anniversary show with a live studio audience that spent a significant amount of time recounting the show’s more memorable, historic, or simply entertaining moments (at least in the eyes of its hosts and guests). However, in their romp through history, Joe Scarborough and guests like former NYC Mayor Michael Bloomberg could not help but to completely annihilate any coherent or reasonable understanding of Al Sharpton’s long history of racial incitement and promoting insanely hateful, paranoid conspiracy theories about Jews, whites, and cops for the past four decades.

Although Sharpton himself did not appear as a guest until near the end of the show, he had his defenders even before showing up to sit on the panel. In fact, in the middle of touting Bloomberg’s legacy of improving the NYPD as a professional police force and reducing crime in the city, Scarborough brought up Sharpton and the protests against the police after the deaths of Eric Garner and Michael Brown in summer of 2014 as a way of demonstrating how professional the NYC police had become:

You know, Al Sharpton was here one day a couple of years ago, I think it was the summer of Ferguson. Things were happening, there were protests across the country. We had a terrible incident in New York City. Lot of people went out and marched, but they marched peacefully. The police were there all along.

But in the middle of emphasizing how peaceful Black Lives Matter was and how nice the police were for protecting their right of assembly, Bloomberg felt the need to step in and remark:

And Al Sharpton incidentally deserves some credit. Sharpton, for all of, don’t agree with him on a lot of things, but Sharpton always was a voice-, in the end, he yelled and screamed, but then he quieted people down. And he deserves some credit. And [NYPD Commissioner] Kelly and I both had good relationships with him.

This statement is frankly quite amazing. If anything, even Sharpton’s fiercest proponents should have a hard time claiming with a straight face that he is a voice of calm or someone who has been a force for peace and “quieted people down.” Sharpton’s long history of inflammatory activism has been well-documented not just here at Newsbusters (see here, here, here, or here), but at the prestigious ‘paper of record’ itself.

In a relatively recent New York Times Retro Report video special on the Tawana Brawley case, the wild accusations of rape and racial abuse at the hands of white policemen and government attorneys by firebrands like Sharpton were exhaustively detailed. The report even showed a retro Sharpton in the midst of theorizing that the only reason he and his compatriots were being criticized was because “crackers didn’t choose us” and ended with Wayne Barrett, a former Village Voice reporter, remarking on Sharpton still being given media attention:

One would think if he sold you such a terrible bill of goods on such a giant story that dominated news cycles for such a long period of time and proved to be a total hoax that you might not show up at his next press conference with your camera crew. [...] He has managed to transcend it magically.

I wouldn’t put it down to magic at all. Just witness what happened when Sharpton appeared in the flesh on Morning Joe on Tuesday:

Instead of treating him as a pariah, Sharpton is still the left’s go-to guru on civil rights and race relations. MSNBC continues to bestow him with a fake moral authority that in turn deforms their own, at least in the eyes any self-respecting human being. Sharpton has gotten away with his deplorable conduct without any genuine attempt at apologizing or righting wrongs precisely because too many media figures, such as those at Morning Joe, continue to whitewash his hateful past.

A transcript of the relevant segments follows below:

JOE SCARBOROUGH: You know, Al Sharpton was here one day a couple of years ago, I think it was the summer of Ferguson. Things were happening, there were protests across the country. We had a terrible incident in New York City. Lot of people went out and marched, but they marched peacefully. The police were there all along. The rou-

MICHAEL BLOOMBERG: And Al Sharpton incidentally deserves some credit. Sharpton, for all of, don’t agree with him on a lot of things, but Sharpton always was a voice-, in the end, he yelled and screamed, but then he quieted people down. And he deserves some credit. And [NYPD Commissioner] Kelly and I both had good relationships with him.

JOE SCARBOROUGH: And how are we doing domestically?

SHARPTON: I think we are still in very serious and perilous climates. I mean, when we look at St. Louis, when we look at what's going on in terms of DACA and what may or may not happen with the health care act, we still are in a very critical period.

SCARBOROUGH: Talk about, talk about post-Charlottesville. Was that a wake-up call for most Americans? You know, the civil rights movement as you know and you’ve said would not have gotten the kick that it needed without the tragedy in that Birmingham church where those little girls were blown up.

SCARBOROUGH: Was Charlottesville a wake-up call? 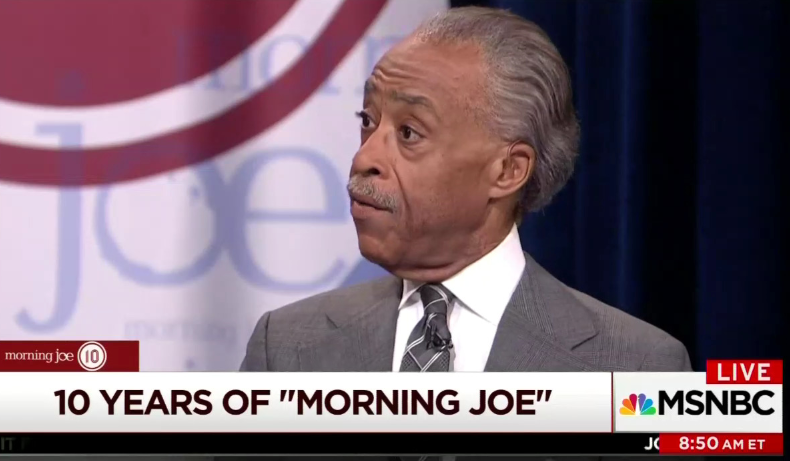 SHARPTON: I think Charlottesville was. I think what was shocking was to see the outright murder of that young lady, who happened to be white, that was standing up against a Confederate general’s statue. But I think what was really a jolt to most Americans was on a presidential level to see an equating of those Confederate sympathizers with people that came out there to protest that. And that's why I think it's important and I have to say, happy anniversary to you and Mika, because what is important-. I hope the president, who's in New York, going to the U.N., is watching this morning and has done this show over ten years, the magic to me of this show, is that every morning we can see people that have fundamentally disagreed not be disagreeable. You and I have disagreed.

SHARPTON: But we’ve sat down on this show and been able to have dialogue to try to achieve something. Mika has, has, comes from a different party from you. You sit down as people and talk about things.

SHARPTON: Well it's to talk to the Willie Geists of the world that doesn't care what Joe Scarborough did in Congress, doesn’t care what Al Sharpton does marching. It’s, how’s this affect the bottom line? That’s why I understand Bloomberg was saying earlier, yeah I scream, but I wanna get, you have to want to get things done.  And you and I found out, and had to convince the Willie Geists of the world that at the end of the day, we want to get something done and we may find out that it’s not that much of a difference once we scream, get the attention, you need that-

MIKA BRZEZINSKI: [talking under Sharpton] We always find that there’s not that much of a difference.

SHARPTON: -don’t ever stop that. But once you do that, try to get something done for the people you care about in this country.