In the age of Trump, the American media insist that freedom of speech is in danger because they somehow consider mocking journalists a suppression of free speech. Now imagine if America had a law where you couldn’t mock Christian doctrines without facing a fine. The press would again denounce the curtailment of free speech but now you'd also hear the cries of “theocracy!" 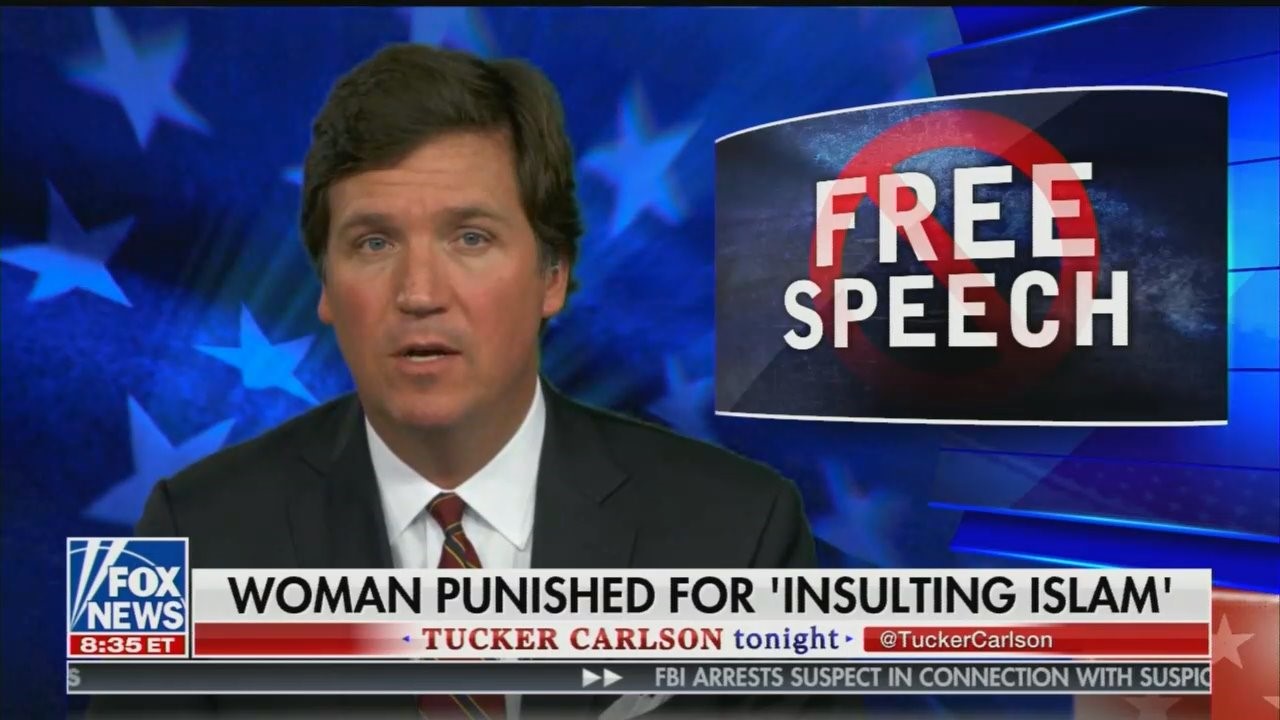 And yet the First Amendment worshipers were missing on October 25 when the European Court of Human Rights upheld an Austrian court verdict that a woman should be punished for casting aspersions on the Islamic biography of Mohammed, the prophet, who married a child bride named Aisha. The ECHR quoted the woman as having said that the prophet “liked to do it with children.” The court further cited her as saying: “A 56-year-old and a six-year-old? ... What do we call it, if it is not pedophilia?”

A panel of seven judges from Germany, France, Ireland, Latvia, Azerbaijan and Georgia ruled unanimously that “the domestic courts comprehensively assessed the wider context of the applicant's statements and carefully balanced her right to freedom of expression with the right of others to have their religious feelings protected.”

The Associated Press gave this outrage one perfunctory dispatch of 136 words.

None of the networks carried this news, except one. Tucker Carlson discussed it on Fox News. That’s zero on ABC, CBS, CNN, MSNBC, NBC, NPR, and PBS. The newspapers were largely AWOL: zero in The New York Times, zero in the Los Angeles Times, zero in USA Today.

One strange blog on the Washington Post website argued “American pundits think Europe has just introduced a blasphemy law through the back door. They’re wrong.” That’s an obvious reply to Tucker Carlson’s guest, Brendan O’Neill, who said “what we are witnessing in Europe is the return of blasphemy law by the back door.”

Georgetown professor Eric Voeten claimed in the Post blog that this wasn’t taking an censorious position, it was simply this European court deferring to the local Austrian authorities....who took a censorious position. “The ruling provides further evidence that the court thinks that it can no longer manage these highly sensitive issues at the European level.”

So why have a European court for 47 countries? Basic logic dies in darkness.

It should be said that this same court has also handed defeats to Muslim causes. In 2014 and again in 2017, they upheld national bans on the burqa (covering women’s faces) in France and in Belgium. This, however, was clearly based in part on security concerns, not religious apparel.

To wit, in January, this same court ruled against Lithuanian courts for fining the clothier Sekmadienis in 2012 for advertisements that tweaked the country’s Catholic majority with implied hipster images of Jesus and his mother Mary. The Jesus figure was shirtless and tattooed. The Mary figure was in a white dress. Captions included “Jesus, what trousers!” and “Jesus, Mary! What a style!”

In that case, the court lectured that freedom of expression “extends to ideas which offend, shock or disturb,” and so “those who choose to exercise the freedom to manifest their religion cannot reasonably expect to be exempt from all criticism.”

The seven-judge panel added, “In the court’s view, it cannot be assumed that everyone who has indicated that he or she belongs to the Christian faith would necessarily consider the advertisements offensive.”

That’s more in line with what Americans expect. We all expect mockery of Christianity. That’s become ho-hum. But why shouldn’t democracies in Europe apply the same wide berth of expression to critics of Islam? And why do secular journalists find this topic so eternally boring? It's worse than boredom, isn't it?