America was stunned when Jared Loughner pulled out a gun at a Tucson supermarket parking lot in 2011 and shot Rep. Gabrielle Giffords in the head at point-blank range and killed six others. No one recalls any TV pundit wondering whether the people should root for Giffords to survive -- or anyone with the gall to imply her head wound was “self-inflicted.”

That was not the case with the shooting of House Majority Whip Steve Scalise and four others last week. Outgoing “CBS Evening News” anchor Scott Pelley proclaimed “It is time to ask whether the attack on the United States Congress yesterday was foreseeable, predictable, and to some degree, self-inflicted.” Wrong. It was time for Pelley to evacuate the anchor chair. 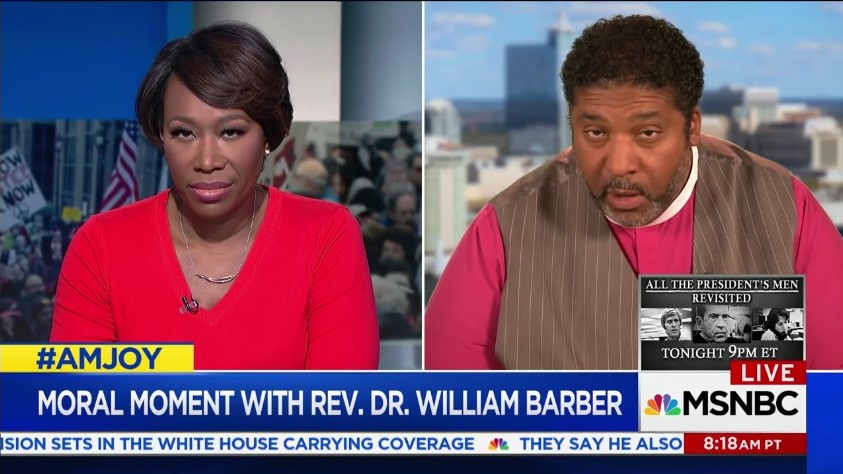 On Saturday morning, MSNBC AM Joy host Joy Reid brought on leftist Rev. William Barber so he could preach his usual sermon about villainous Republicans who “crucify voting rights” and enact other legislative evils. The MSNBC screen promised a “Moral Moment.”

This is how Reid set up the Reverend: “Obviously it’s a delicate thing, because everybody is wishing the Congressman well and hoping that he recovers.” She didn’t stop there.

“But Steve Scalise has a history....we’ve all been forced to sort of ignore on race. He did come to a leadership after controversy over attending a white nationalist event, which he says he didn't know what it was.” And a list came out: “He also co-sponsored a bill to amend the Constitution to define marriage between a man and woman. He voted for the House health care bill, which as you said, would gut health care for millions of people, including three million children. And he co-sponsored a bill to repeal the ban on semiautomatic weapons. Are we required in a moral sense to put that aside at the moment?”

This shameless program was supported by the following advertisers over the weekend: AT&T, Duluth Trading Company, Ensure, Purina, Crest, Gas-X, Infiniti, and ZipRecruiter.com.

The Twitter account for Reid’s AM Joy show seconded her emotion: “Rep. Scalise was shot by a white man with a violent background, and saved by a black lesbian police officer, and yet...” A video graphic again listed his votes for the House health care bill, a marriage amendment, and a repeal of the liberal gun control law.

Common decency, as in the Giffords shooting, means we all hope and pray for the recovery of a public servant. It’s not the time to quibble about their gay-marriage voting score. Greg Gutfeld on Fox said it best: “Let me ask you this. A woman is raped. Do you feel compelled afterwards to dredge up her stance on abortion or global warming?”

NBC and MSNBC weren’t going to address Reid’s immoral moment. NBC and MSNBC had the audacity to skip over that, but applied their outrage instead to a Republican PAC that made a disreputable ad in a Georgia special election referring to the shooting, alleging the “unhinged Left” applauded the shooting and the violence won’t stop “if Jon Ossoff wins.” Everyone can denounce that, and did, as the other networks put the ad flap into heavy rotation leading up to the election.

But Joy Reid’s uncivil rudeness – do we have to root for Scalise to survive? – went unaddressed. All the networks that aired this ad about “applauding” the shooting deplored it, declared it “beyond offensive” were the same networks that shamelessly publicized the false liberal claim that Sarah Palin was somehow responsible for Gabby Giffords getting shot. Civility is never a two-way street for the Left.