New York Times foreign affairs columnist Tom Friedman, who three weeks ago derided Mitt Romney for how he “acts...as if he learned his foreign policy at the International House of Pancakes,” on Sunday’s Meet the Press dismissed concerns over how the Obama administration handled Benghazi before and after the attacks. “To me,” he declared, “this is an utterly contrived story in the sense that ‘this is the end of,’ you know, ‘Obama’s foreign policy.’”

He justified his contention, in the question he cued up guest panelist Van Jones: “We learned over the weekend that even the talking points that Ambassador Rice received on that Sunday morning from the CIA suggested there was no pre-planning.” 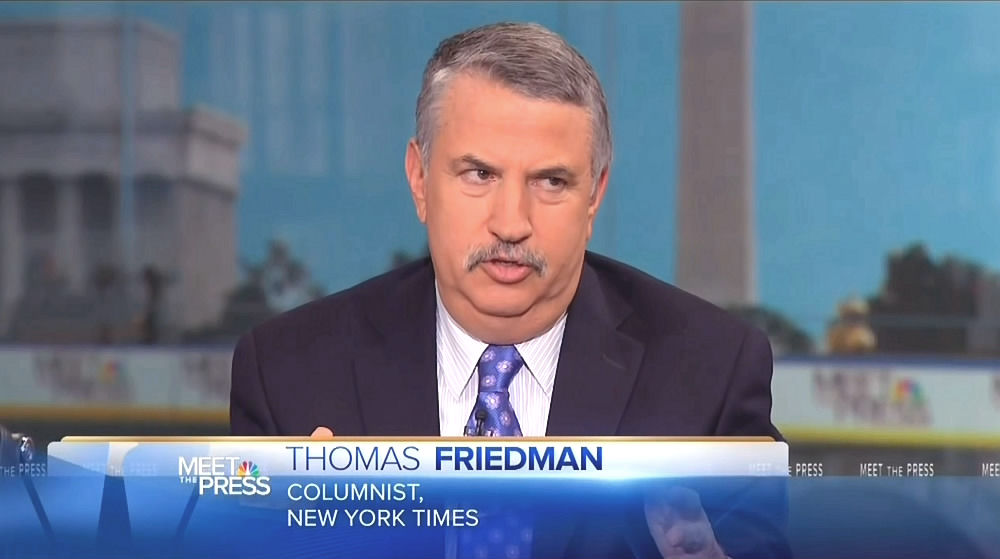 Friedman maintained during the panel on the October 21 Meet the Press:

It’s obviously been totally politicized at this point. I lived in a civil war in Beirut for four years, these are incredibly messy situations. People don’t show up with uniforms....You can have a flash mob turned into a planned thing. You can have planned people inside of a flash mob. To me, this is an utterly contrived story in the sense that, “this is the end of,” you know, “Obama’s foreign policy.”

Later, when panelists were asked to elucidate the question they’d pose at Monday night’s upcoming third presidential debate, Friedman lived up to type, repeating his mantra about the wonders of a carbon tax:

Would you support a carbon tax that will help us be less dependent on foreign oil, strengthen  innovation at home and combat climate change and pay down the deficit?

It’s a miracle tax: It solves everything!