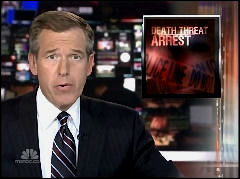 NBC on Monday night squeezed in a few seconds for the arrest of “a Philadelphia man for threatening the life of the number two Republican in the House of Representatives, Eric Cantor of Virginia.”

Yet after the networks led last week with less-immediate threats against Democrats, they weren’t so interested in a real case of a death threat against a Republican as neither CBS nor ABC aired a word about the arrest and NBC’s Brian Williams gave it short-shrift after leading last Wednesday with Democrats as the victims: “It's getting ugly as anger over health care reform erupts into some over-the-top rhetoric, including threats now against members of Congress.”

The next night, Williams still portrayed opponents as the only ones with miscreants amongst their ranks: “While the White House continues to celebrate its largest-ever legislative victory, opponents of health care reform have reacted to the final vote with anger, a few of them with threats of violence.”

CBS last week started with “threats of violence against Democrats who voted for health care reform” as Nancy Cordes relayed how “Democrats complain Sarah Palin is also using violent words and imagery.” On Monday, the CBS Evening News devoted a full story to fretting over a “loophole” which insurance companies may use to delay providing coverage to kids with pre-existing conditions and Katie Couric spent half a minute on how the New York Yankees are “the best-paid team in all of sports,” with the NBA “the highest-paid league” followed by cricket’s Indian Premier League. 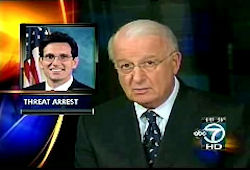 Thursday night, March 25: “Nets Not So Excited About Violence and Threats Aimed at ObamaCare Opponents.”

The short item from Williams on the Monday, March 29 NBC Nightly News: 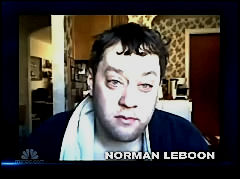 The FBI said today they've arrested a Philadelphia man for threatening the life of the number two Republican in the House of Representatives, Eric Cantor of Virginia. 38-year-old Norman Leboon made a profanity-laced video that called Cantor evil and then some. He's being held without bail pending a psychiatric evaluation. The arrest is not related to a bullet hole found in Cantor's district office which police now say was caused instead by random gun fire.