When conservatives take to the House floor to criticize the news media’s liberal distortions, that’s not newsworthy to NBC, but Wednesday’s NBC Nightly News made time to showcase an unhinged liberal Democrat, Representative Patrick Kennedy, screaming against the media during House floor remarks in favor of a Dennis Kucinich-backed resolution to withdraw all troops from Afghanistan by the end of the year, a fringe proposition which was soundly defeated 356 to 65.

Anchor Brian Williams characterized Kennedy’s yelling tirade as “a gripping moment,” describing how Kennedy railed against “U.S. strategy in the war, then he turned on the news media and how few have bothered to show up to cover the debate.” Williams’ embracing set up, with “Speaking Out” as the on-screen heading:

There was a gripping moment this afternoon here in Washington. It happened on the floor of the House of Representatives as the House was debating withdrawing U.S. troops from Afghanistan. Congressman Patrick Kennedy, a Democrat who represents Rhode Island, the son of the late Ted Kennedy, got up and gave a loud, emotional and angry speech about U.S. losses in the war, U.S. strategy in the war, then he turned on the news media and how few have bothered to show up to cover the debate.

Viewers were then treated to a screaming Kennedy: 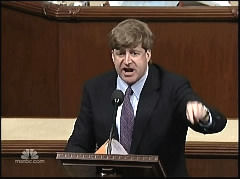 If anybody wants to know where cynicism is, cynicism is that there's one, two press people in this gallery! We’re talking about Eric Massa 24/7 on the TV. We’re talking about war and peace, $3 billion, 1,000 lives and no press? No press?! You want to know why the American public is fit? They’re fit because they’re not seeing their Congress do the work they are sent to do. It's because the press, the press of the United States is not covering the most significant issue of national importance, and that's the laying of lives down in the nation for the service of our country! It's despicable the national press corps right now.

Williams finished up without mentioning the overwhelming defeat for the measure: “Congressman Patrick Kennedy, who recently announced in the wake of his father’s death, he will not run for re-election to Congress. He’s coming to the end of his eighth term in office.”