On Monday's CBS This Morning, Sharyl Attkisson pointed out the "potential conflict of interest" in the ongoing controversy over the Islamist attack on the U.S. compound in Benghazi, Libya. Attkisson detailed how congressional Republican are scrutinizing Undersecretary of State Patrick Kennedy's involvement in naming staff to the Accountability Review Board, even as it was investigating his role in the lead-up to the September 11, 2012 attack. [MP3 audio available here; video below the jump]

It was Attkisson's first report about Benghazi on CBS's morning and evening newscasts since the May 8, 2013 edition of CBS This Morning. Her report that day was the first time in over five months that the journalist reported about the story on the air.

Loyalty is one thing, delusion another.

Former Kennedy speechwriter and campaign operative Bob Shrum outdid himself on Ed Schultz's radio show Wednesday, gushing about Ted Kennedy and the maudlin video tribute to him at the Democratic convention. (audio) --

CNN is no stranger to the Kennedys, having lauded Ted Kennedy as "American royalty" and given his son Patrick an exclusive one-hour special on his struggle with alcoholism and "a new beginning."

CNN's Sanjay Gupta Asks 'Did Someone or Something Fail Jared Loughner?' After Patrick Kennedy Sympathizes With Tucson Shooter

"Did someone or something fail Jared Loughner?" CNN's chief medical correspondent Dr. Sanjay Gupta asked recovering alcoholic and former congressman Patrick Kennedy Sunday. The question came after Kennedy described his alcoholic condition as a mental disease and not a moral failure, and attributed mental illness to Loughner, the Tuscon shooter who killed six and critically injured Rep. Gabrielle Giffords (D-Ariz.) in January.

When Kennedy was asked about Loughner being "failed," he issued a sweeping indictment of society. "Clearly we all failed," he said, noting that the Giffords assassin was mentally ill and was not treated for his ailments. "We failed as society because every time we see someone who's – and we use the pejorative words 'crazy,' you know, 'psycho,' 'nuts,' we look the other way."

On ABC’s World News Saturday, correspondent John Hendren filed a report marking this year as the first time since 1947 that no members of the Kennedy family will hold public office in Washington, D.C. The piece began:

JOHN HENDREN: The sun has set on the Kennedy era. When Congress reconvenes next week, it will be the first time in 64 years that there has not been a Kennedy in office.

KATHLEEN KENNEDY TOWNSEND, DAUGHTER OF ROBERT F. KENNEDY: I think it's sad. I think that we need a Kennedy.

Hendren went on to recount the death of former Senator Ted Kennedy, "the Lion of the Senate," and the decision of Rhode Island Representative Patrick Kennedy to retire, as well as the shuffling of office space with the arrival of newly-elected Republicans. The ABC correspondent also noted that Tea Party-backed Rep. Ron Paul and Senator-elect Rand Paul are the only family members serving who will be serving concurrently in Congress.

Hendren concluded by offering a ray of hope for those would like to see the Kennedy family in government again:

MSNBC Frets Over No More Kennedys in Congress: Who Will 'Fill the Void' at This 'End of an Era?'

While the rest of America might not be mourning the departure of the troubled Patrick Kennedy from Congress, MSNBC on Tuesday lamented "the end of an era" that saw at least one member of the Kennedy family serving in Washington for 63 years. The network featured three segments on the topic in the span of an hour.

Jansing and Co. Guest anchor Richard Lui wondered, "...Will we see a family that will be able to take up the mantle here?" Talking to Democratic strategist Karen Finney, he repeated talking points from the Rhode Island Congressman who, in 2006, crashed his car while driving under the influence of prescription drugs at 2:45am: "...Patrick Kennedy was saying, you know, a public service versus public office. It's about public service."

Referring to his other guest, Michelle Bernard of the Independent Woman's Forum, Lui added, "So, when we take a look at that, Michelle, what more might we see going forward in terms of a family that might, again, fill in this void that we're now seeing?"

Today Show Mourns Over No More Kennedys in Congress

For the Today show, Democratic Representative Patrick Kennedy's departure from Congress was something to mourn because it represented, as NBC's Matt Lauer lamented, "The end of an era. There's been a Kennedy in Congress since John F. Kennedy entered the House back in 1947." The nephew of the late President was invited on Monday's Today show to commemorate the occasion with he and co-host Meredith Vieira fondly looking over newly-released photos of JFK from Life.com and reminiscing about his father, the "great" Ted Kennedy.

For the record the Today show got their facts wrong, as the MRC's Rich Noyes pointed out, there was no Kennedy in Congress from January 1961 to November of 1962 as Representative Ben Smith held that seat long enough until Ted Kennedy was old enough to take over.

The following teaser and exchange were aired on the November 8 Today show: 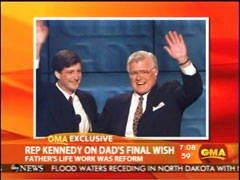 Good Morning America's Robin Roberts on Monday allowed the Kennedys to take a victory lap for the passage of health care. As the co-host interviewed Patrick Kennedy, an ABC graphic announced, "Rep. Kennedy on Dad's Final Wish: Father's Life Work Was Reform." Roberts teased the segment, "And we talk to the Congressman who sees this bill's passage as the completion of his late father's legacy."

The anchor repeatedly tossed softballs to the Rhode Island representative: "Did you feel your father's presence throughout this ordeal?" Earlier in the segment, she offered this hard-hitting query: "Congressman, an emotional 24 hours for so many people. I want to just get a gauge of your feelings here this morning."

In comparison, co-host George Stephanopoulos grilled Senator John McCain on the Republican response. He demanded, "I know that Republicans want to repeal the bill. But there are also some provisions that take effect this year that you said you're for...No cancellation of policies if you get ill. Will you move to repeal those provisions as well?" 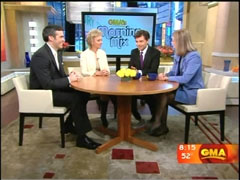 Good Morning America's George Stephanopoulos on Friday moderated a group of mostly liberal voices to sympathize with Democratic Congressman Patrick Kennedy and, at times, former Representative Eric Massa. Speaking of the politician who spent the week talking about naked showers arguments and tickle fights, Stephanopoulos fretted, "Too much time on Eric Massa?"

Speaking of Massa's now infamous Glenn Beck interview, Hefner tried to highlight the positive: "...I actually thought the most thoughtful thing that Massa said on the Glenn Beck show, was in response to the question of, what would you fix? And he started talking about campaign finance reform."

Good Morning America's Jake Tapper on Thursday forced a completely unrelated rant by Patrick Kennedy into a story entirely on health care. Tapper pivoted off a statement by Senator Mitch McConnell that legislation on the subject is a "farce." He then spun, "For one Democrat, the force driving that farce- the media- who earned the scorn of Democratic Congressman Patrick Kennedy for focusing away from substance."

Tapper then played a clip of the Rhode Island Representative screaming, "If anyone wants to know where cynicism is, cynicism is that there's one, two, press people in this gallery! We're talking about Eric Massa, 24/7 on the TV! It's despicable, the national press corps right now!" Watching this, viewers would be led to believe Kennedy was talking about health care. He wasn't.

The Congressman was actually yelling about a bill that was voted down in Congress which would have brought the troops home from Afghanistan. The Tapper segment even edited out the part where Kennedy's topic became clear: "We're talking about war and peace! Three billion dollars! A thousand lives!" Are journalists so interested in self flagellating over a liberal congressman's criticism that they would force Kennedy's remarks into a totally unrelated story?

By Brent Baker | March 11, 2010 2:19 AM EST
When conservatives take to the House floor to criticize the news media’s liberal distortions, that’s not newsworthy to NBC, but Wednesday’s NBC Nightly News made time to showcase an unhinged liberal Democrat, Representative Patrick Kennedy, screaming against the media during House floor remarks in favor of a Dennis Kucinich-backed resolution to withdraw all troops from Afghanistan by the end of the year, a fringe proposition which was soundly defeated 356 to 65.

Anchor Brian Williams characterized Kennedy’s yelling tirade as “a gripping moment,” describing how Kennedy railed against “U.S. strategy in the war, then he turned on the news media and how few have bothered to show up to cover the debate.” Williams’ embracing set up, with “Speaking Out” as the on-screen heading:

There was a gripping moment this afternoon here in Washington. It happened on the floor of the House of Representatives as the House was debating withdrawing U.S. troops from Afghanistan. Congressman Patrick Kennedy, a Democrat who represents Rhode Island, the son of the late Ted Kennedy, got up and gave a loud, emotional and angry speech about U.S. losses in the war, U.S. strategy in the war, then he turned on the news media and how few have bothered to show up to cover the debate.