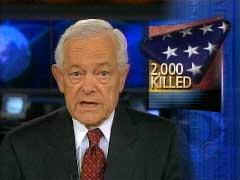 An overwhelming 79 percent of Iraqis, who risked their lives just over a week ago to cast their ballot, voted in favor of the nation's new constitution, but you'd have missed it if you sneezed during Tuesday's CBS Evening News or ABC's World News Tonight. CBS anchor Bob Schieffer delivered only this single sentence -- “Iraq's government announced today that voters did approve the country's new constitution in this month's referendum” -- before moving on to a full story about the 2,000th death of U.S. servicemen in Iraq, a piece he could not resist introducing without adding this snide aside: "More than 90 percent of the 2,000 who died in the war have died since the President declared major combat was at an end in May 2003.”

On ABC, which had time for a full piece from Terry Moran about the "potentially huge" story of Vice President Cheney's supposed role in the Plame case, anchor Elizabeth Vargas briefly noted how “in Iraq today, there was a milestone on the road to democracy: The official results show that a new constitution was ratified by an overwhelming margin.” That was it for the Iraqi constitution. ABC led with, as Vargas put it, the “terrible milestone” of 2,000 killed in Iraq. Viewers then saw two stories: Martha Raddatz on the anguish of Army medical personnel and Barbara Pinto on parents in an Ohio town who have lost sons in Iraq. (A summary of NBC Nightly News, which did report on the passage, as well as a transcript of Schieffer's presentation, follows.)

The NBC Nightly News devoted a full story to the 2,000 “milestone” followed by a piece from Iraq which began with the overwhelming approval of the constitution by 79 percent, what reporter Richard Engel called “a historic milestone” before he moved on to the ongoing violence and how “there are some bright spots,” such as more jobs.

"Iraq's government announced today that voters did approve the country's new constitution in this month's referendum. The sad marker that we all dreaded, but knew was coming, came today. The deaths of three more American service members brought the total U.S. dead in the war to 2,000. President Bush talked about the deaths during a speech to military wives."

George W. Bush, in speech: "A time of war is a time for sacrifice, and the greatest burden falls on our military families. We've lost some of our nation's finest men and women in the war on terror. Each of these men and women left grieving families and left loved ones back home."

Schieffer: "More than 90 percent of the 2,000 who died in the war have died since the President declared major combat was at an end in May 2003, which brings us to our next report. Usually we salute fallen heroes during this part of our broadcast, but tonight, we're going to look at the impact a military death can have on not just a family, but an entire community. Here is national security correspondent David Martin."

Martin delivered a piece about the impact of deaths on small towns, particularly one on Georgia.
Iraq CBS Evening News