Last Friday, an apparently unarmed 13-year-old autistic boy named Linden Cameron was shot by Salt Lake City police after his mother called them for assistance in getting her son to a hospital because he had a mental breakdown.

The boy was allegedly shot while running away, receiving serious injuries. In spite of the fact that a number of major online news publications have covered the tragic story -- like The Washington Post, CNN.com, CBSNews.com, and New York Times -- it has received very little television coverage from the broadcast and cable news networks.

On Tuesday evening and Wednesday morning, all three broadcast news casts ran full reports updating viewers on the case of Daniel Prude -- a black man who died after Rochester, New York, police officers tried to assist him during a mental breakdown, sparking recent protests in the city. The police chief and several ranking officers resigned on Tuesday, as reported by the networks.

But none of those shows mentioned the Utah case. And, while CBS's main morning news show, CBS This Morning, has so far not carried the Utah story, the same network's early morning show, CBS Morning News, did find time to give the story 43 seconds buried at 4:12 a.m. Eastern on Wednesday. Anchor Ann Marie Green informed viewers: 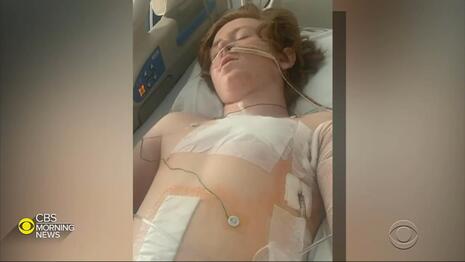 The Salt Lake Tribune reports that the city's mayor is promising a swift investigation after a police officer shot a 13-year-old boy with autism. The boy's mother says that she called police Friday night and asked for a crisis intervention team to help take her son to the hospital. The police say that they were called with a report of a boy threatening people with a weapon. When police arrived, the boy ran and was shot. His mother says he ran because he was scared.

Then came a clip of Golda Barton, the boy's mother: "Why didn't they shoot him with a rubber bullet? He's a small child -- why don't you just tackle him? You are big police officers with massive amounts of resources. Come on, give me a break."

A number of shows on CNN and MSNBC also covered the Rochester story, including CNN's New Day and MSNBC's Morning Joe.

On Wednesday evening's The Beat show, MSNBC host Ari Melber notably spent 18 seconds on the Utah story during a 10-minute piece on police violence that mostly focused on the Prude case.

As the segment made clear that Prude was African American, Melber did not bother to clarify that Linden Cameron is white, which would have helped illustrate that questionable police violence effects people of all races, and is not as much an issue of racism as the liberal media suggest.

The media similarly ignored the death of Hannah Fizer, an allegedly unarmed white woman who was shot by a police officer in Missouri, raising questions about why the shooting happened.

The broadcast evening news casts that ignored the Utah story on Tuesday evening were sponsored by Publishers Clearinghouse. Their contact information is linked.