As Michigan Democratic Rep. Debbie Dingell appeared as a guest on Tuesday's New Day, CNN host Alisyn Camerota at one point seemed to fret that businesses are planning to pay out bonuses after the tax cuts were passed as a way of making their employees grateful to Republicans for their pay increase and coax them to vote for the GOP -- and that the ploy might succeed.

At 7:24 a.m., as Rep. Dingell complained that she wants President Donald Trump to do more on economic issues like infrastructure and health care, Camerota began setting up her next question:

ALISYN CAMEROTA: You know, just, ever since the tax reform was announced -- tax overhaul or whatever you want to call it -- there have been this whole slew of companies that have come forward and said, "Guess what -- we're going to give out bonuses now to our employees."

And I have just a partial list in front of me, and there's nine companies on here from AT&T to Boeing to Comcast, Bank of America, Sinclair, Wells Fargo, PNC -- there's all sorts of companies that say they're going to give something to a thousand -- a thousand dollars worth of bonuses to their hundreds of thousands of employees. One is going to -- Bancorp is going to boost the minimum wage to $15 an hour. 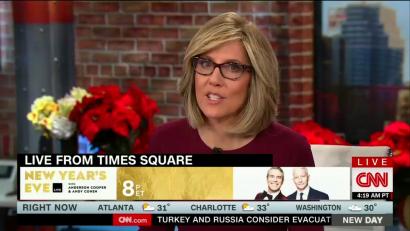 CAMEROTA: Obviously, they could have done this before the tax overhaul was announced -- they were sitting on profits -- but they didn't. They did it when the tax overhaul was announced, and I'm wondering if you -- as a Democrat -- are worried about the wind in their sails. People vote with their pocketbook -- I don't have to tell you this -- so if you just get a $1,000 bonus, you're voting for Donald Trump again.

DINGELL: Well, first of all, I've always said, you know, I keep saying the same thing -- the next election is going to be about the economy, jobs, trade deals. You know, I'm never going to complain that any working man or woman gets an extra boost in their income. But I think a lot of people are still worried. The nonpartisan Tax Institute says that less than 86 million working families are actually going to see an increase in taxes at some point.