On Monday's New Day, liberal CNN co-host Chris Cuomo got into a heated debate with conservative CNN political commentator and talk radio host Ben Ferguson over the issue of a high school girl who identifies as a boy who was barred from wrestling with boys and so chose to wrestle girls instead.

As the debate shifted to the issue of transgender bathroom policy, Cuomo not only accused conservatives of "scarring" transgenders and causing an increase in suicide by not allowing them to do what they choose to do, but he also mocked those who fear the possibility of girls having "genitals waved in their face" by men intruding into women's restrooms.

Shortly after 8:30 a.m. ET, after Ferguson argued that it was unfair for the girl who identifies as a boy to wrestle girls because she had been injected with testosterone to increase her muscles, nor was it logical to have her wrestle boys, Cuomo brought up the bathroom issue and charged that conservatives have injected "misinformation and mythology" into the debate:

Cuomo, who last week obnoxiously posted a tweet claiming that a 12-year-old girl who is afraid of being confronted by a man engaging in indecent exposure would only be afraid because of her parents' "intolerance," took the time to whine about Twitter users taunting him for his far left position on making men legally entitled to using women's facilities:

And for you to say that there are none on the right who are making about what I'm saying is demonstrably untrue. Go to my Twitter feed, brother. They are putting pictures of my face on a guy exposing himself to a 12-year-old girl to say, "Cuomo's okay with this because he wants transgender people to have the right to go to the bathroom that they feel comfortable in." You're denying that?

Toward the end of the segment, the liberal CNN host made his charge that transgenders are being "scarred" by conservatives. And, in spite of documented examples of sexual predators going into women's restrooms and harassing or assaulting women and girls, Cuomo remained in denial as he challenged Ferguson and CNN viewers to find examples of lewd behavior. Cuomo:

Transgender doesn't happen on a whim. It's a continuum of time and hormones and pain and anxiety, and I challenge you and everybody who's listening to go find me a case of indecent exposure by a transgender person in a bathroom.

It doesn't happen. And if you look at the data, the only thing that you accomplish by doing what you say is traditional is that you scar these kids as an other. And their rates of depression and suicide and non-acceptance go up.

Below is a transcript of relevant portions of the Monday, February 27, New Day on CNN:

CHRIS CUOMO: Many now are questioning if the competition was fair. By the way, on both sides, because the transgender advocates say he should be wrestling against boys like he wants to. This, of course, is a window into a larger political battle that is fueled with misinformation and deception. Let's discuss. CNN political commentator and host of The Ben Ferguson Show, Ben Ferguson. First, what's your take on the tournament, my friend?

CUOMO: The irony is that if there were acceptance, we wouldn't have had this issue because this kid would be wrestling against boys. But just so we know, and for those as you're learning about this issue —

FERGUSON: Here - even then, though, here's the thing —

CUOMO: — let's just clarify one thing. The science, you have to be very careful about, okay. The amount of hormone that this kid is given is the minimum standard they can give to replicate the output of a boy. So it's not like a super amount of testosterone. It's not like these kids are going to be super human. It is the opposite. They are given the minimum. Scientifically, that is the outcome, if you look and do the research as I have, you'll see that. But that's not really the issue. The issue is acceptance. If this state allowed this kid to wrestle against boys, which is what he wants, we wouldn't be talking about this case right now. 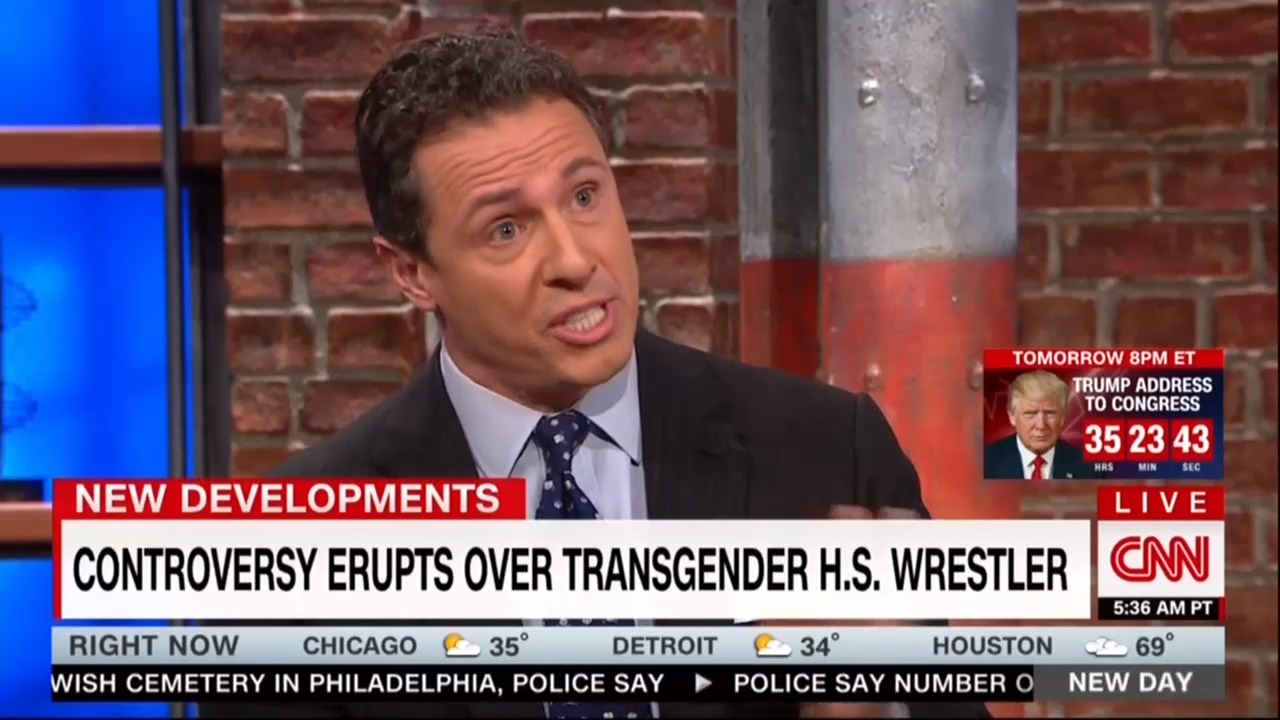 CUOMO: But it does count and that's why we're having this bigger debate about what you allow transgender kids to have access to and what you don't, the bathrooms, the locker rooms. It's all related and people who share your idea are using misinformation and mythology here. The idea of, if you —

FERGUSON: It's not misinformation.

CUOMO: Well, of course it is, because the idea that they're going to have gentiles waved in their face.

CUOMO: My 12-year-old daughter, she's going to have genitals waved in her face. That's what you on the left want. You realize that that's an absurd notion, right?

FERGUSON: Well — well, one, I'm on the right. And, second of all, it — that is not the notion that the people on the right have been saying, that you're going to have genitals thrown in your face in a locker room. What we're saying is, it is not abnormal or crazy or unlogical to say that if you are born a boy, that you use the boy's restroom/locker room and if you were born a girl, you go in —

CUOMO: But what if you identify as a girl? You - but you're oversimplifying — you're simplifying the idea of gender and sex. You're —

FERGUSON: Well, but I — you don't change — I'm not oversimplifying —

CUOMO: Look, we've heard this. This is not a novel concept.

CUOMO: But what — but what happens — what happens when the girl identifies as a boy and wants to go to the boys locker room or vice versa to play into the fear? And for you to say that there are none on the right who are making about what I'm saying is, is demonstrably false.

FERGUSON: Very few are making the —

FERGUSON: There are very few — hold on, very few.

CUOMO: They are putting pictures of my face on a guy exposing himself to a 12-year-old girl to say, Cuomo's okay with this because he wants transgender people —

CUOMO: To have the right to go to the bathroom that they feel comfortable in. You're denying that?

FERGUSON: Chris, if your argument — Chris, Chris, if your argument is trolls on Twitter are the majority of Americans, that is insanity. Go look at my Twitter feed after this segment's over. We both should be able to agree there are crazies on the left and crazies on the right. There's trolls out there in the world. That's not the majority of the Republican —

FERGUSON: Hold on, but that's not the majority of Republicans out there. I'm not making the argument that you're implying that somehow that they're saying that people are walking into locker rooms and throwing around their genitals in people's face. That is not the argument of the majority of those that are conservatives, like myself. I've never made that argument. That's a bad argument to be making here. The argument I'm making, to be very clear is, it is not insane. In fact, it's very rational, logical and traditional, to imply that you should have boys go to the boys locker room, girls go to the girls locker room —

CUOMO: But the state law is intolerance in practice. They don't want the kid to have what he wants, so they're forcing him to wrestle with girls.

CUOMO: You don't want the kid to use the bathroom they want because you don't like it based on your tradition.

CUOMO: I'm saying, let the kids go where their want.

FERGUSON: Chris, it is intolerant —

CUOMO: Let the kids go where they want —

FERGUSON: — Chris, it's intolerant to say —

FERGUSON: — somehow not even listening to their idea and saying that therefore I'm intolerant or they are intolerant —

FERGUSON: Shows you the hypocrisy that —

FERGUSON: — of the intolerant argument you're making here.

FERGUSON: This has been traditional.

CUOMO: But that's a myth.

CUOMO: Transgender doesn't happen on a whim. It's a continuum of time and hormones and pain and anxiety and I challenge you and everybody who's listening to go find me a case of indecent exposure by a transgender person in a bathroom. It doesn't happen and if you look at the data, the only thing that you accomplish by doing what you say is traditional is that you scar these kids as and other and their rates of depression and suicide and non-acceptance go up.

CUOMO: And if you let it happen this way —

CUOMO: Nobody gets hurt except your idea of what's right.

FERGUSON: To imply that — no, to imply somehow that — that anybody that believes in actually having boys be boys or looking at a birth certificate and deciding that that birth certificate of male or female should decide what you wrestle and what sports you play, to imply that somehow that suicide or depression is on me, look, I feel bad for — for this young individual because now he's in the spotlight in a way, but the fact is, that it's obviously not fun for him. Getting booed when you win certainly is not an exciting moment, but he chose to be in this position.