CNN's New Day on Thursday devoted its first segment to fretting over President Donald Trump reversing the Obama administration directive giving transgender students the right to use whatever restrooms they wish as the Trump move was labeled "controversial" and one that was "denying students rights" and "tearing at the social fabric of the country." No one seemed concerned that girls and women might be denied the right to have their own restrooms if men and boys are allowed to pretend to be women and demand entry.

CNN's Chris Cuomo also oddly stated that, after the Supreme Court decision mandating that same-sex marriage be recognized nationwide, "everyone celebrated" the ruling as he fretted the absence of legislation codifying it.

Shortly after 6:00 a.m. ET, co-host Alisyn Camerota labeled the move "controversial" as she set up a report: "A new controversial action from the Trump administration. Last night, they withdrew the protections for transgender students that President Obama had put in place. The White House says schools and states should decide now how to handle this issue."

After a piece by correspondent Joe Johns, the came then show's regular discussion segment. CNN political analyst and former NBC Meet the Press host David Gregory fretted that Trump is "denying" rights to students: "What's striking to me is the President is willing to wade into this area of denying students rights at a time when gay rights have come so far so fast in this country, and really has been bipartisan."

A bit later, Gregory predicted that a liberal gay rights agenda would win in the long run:

I do think it's worth saying that, as we talk about this in the political context, you have to predict that all these barriers are coming down. I mean, look at the debate over gay rights in this country. And people, if you're a teenager and you're struggling with the idea of who you are and you're just trying to be who you are the way God made you, and you hear all these politicians talking about what rights you ought to have, it's hard to see this holding up. 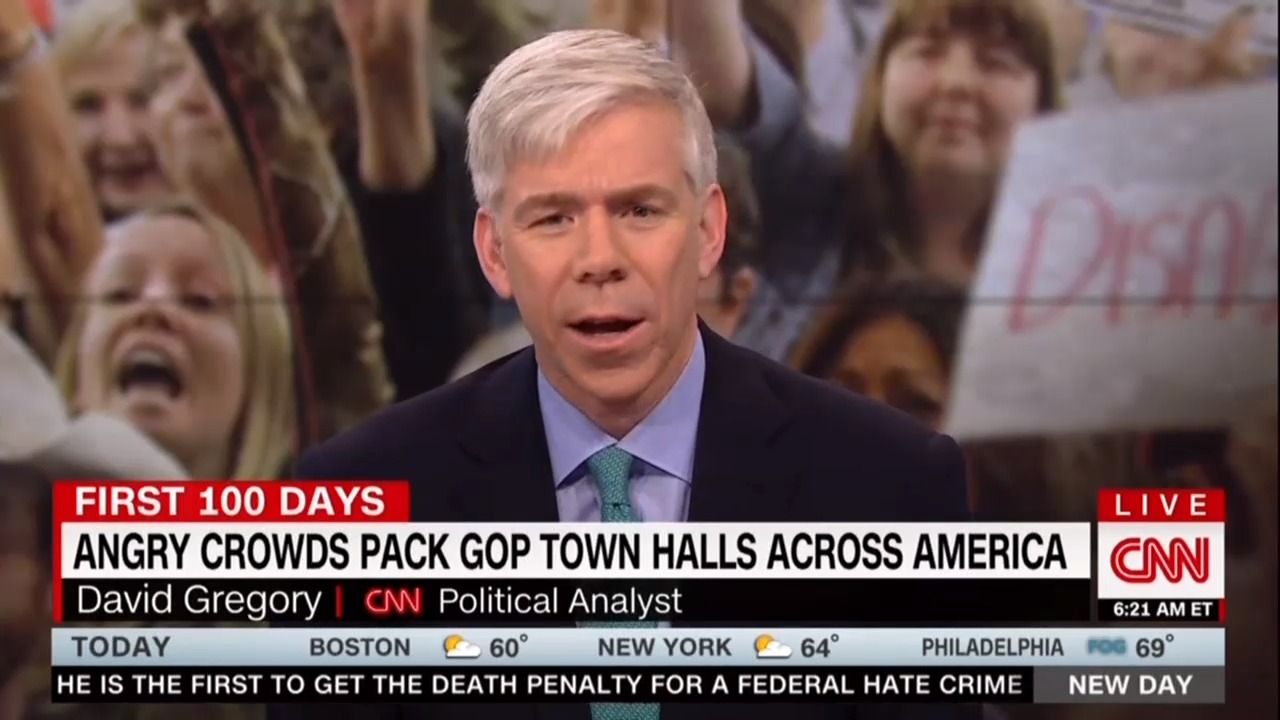 I think there's parents around this country and around the world who are in relationship with their children and their children are saying, "You know what, this is who I am, and I want to be comfortable in who I am." And they're going to get a lot of support from their parents, and I think the political class will continue to come in line. I think it's very hard to reverse the trend that we've been on.

After the Washington Post's Abby Philip brought up the issue of how courts might handle transgenders moving from one place to another where the rights they are granted in two different places would differ, Cuomo made his odd word choice that "everyone" celebrated the liberal ruling on gay marriage:

Right, but remember the power of legislation, right? And not just codifying but cementing those values. After the gay marriage case, everybody celebrated, but those who understood the law best said, "No, this is just the beginning, not the end," because until you have legislation -- that's what Title IX is all about, right, protecting minority groups -- you're going to go case by case.

If one were watching CNN on the day the U.S. Supreme Court mandated nationwide gay marriage, it would have appeared that "everyone" inside the CNN studios were "celebrating," even many who do not work for CNN were not.

In the next segment, during a discussion of angry liberals appearing at town halls confronting congressional Republicans, Gregory made his comment about Trump being the one who was "tearing at the social fabric of the country" as he referred back to the transgender issue. Gregory: