On Monday's CNN Newsroom, host Carol Costello asked Texas Republican Representative and Donald Trump supporter Brian Babin whether the GOP presidential nominee should apologize for calling President Barack Obama the "founder" of ISIS as a way of reaching out to black voters.

Even though referring to the President Obama as the "founder" of ISIS was merely a rhetorical way of blaming the President for pulling out of Iraq and allowing the terrorist group to increase its power in the aftermath, Costello posed to her guest: "Do you think it would be more effective perhaps if Mr. Trump would apologize for the birther talk or that President Obama founded ISIS? Do you think those things might be turning off African-American voters?"

She added: "And if Mr. Trump just said, 'You know, I didn't mean that stuff about the birther stuff,' would that appease voters? Should he say something like that? Should he apologize?"

A bit earlier, Costello had brought up the issue of Trump's support from black voters as she played a clip of CNN New Day host Alisyn Camerota recalling complaints over the GOP candidate's recent speeches on the subject, with Costello asking about charges that Trump was really just trying to win over white voters "who think Trump is racist."

Below is a transcript of the relevant portion of the Monday, August 22, CNN Newsroom with Carol Costello: 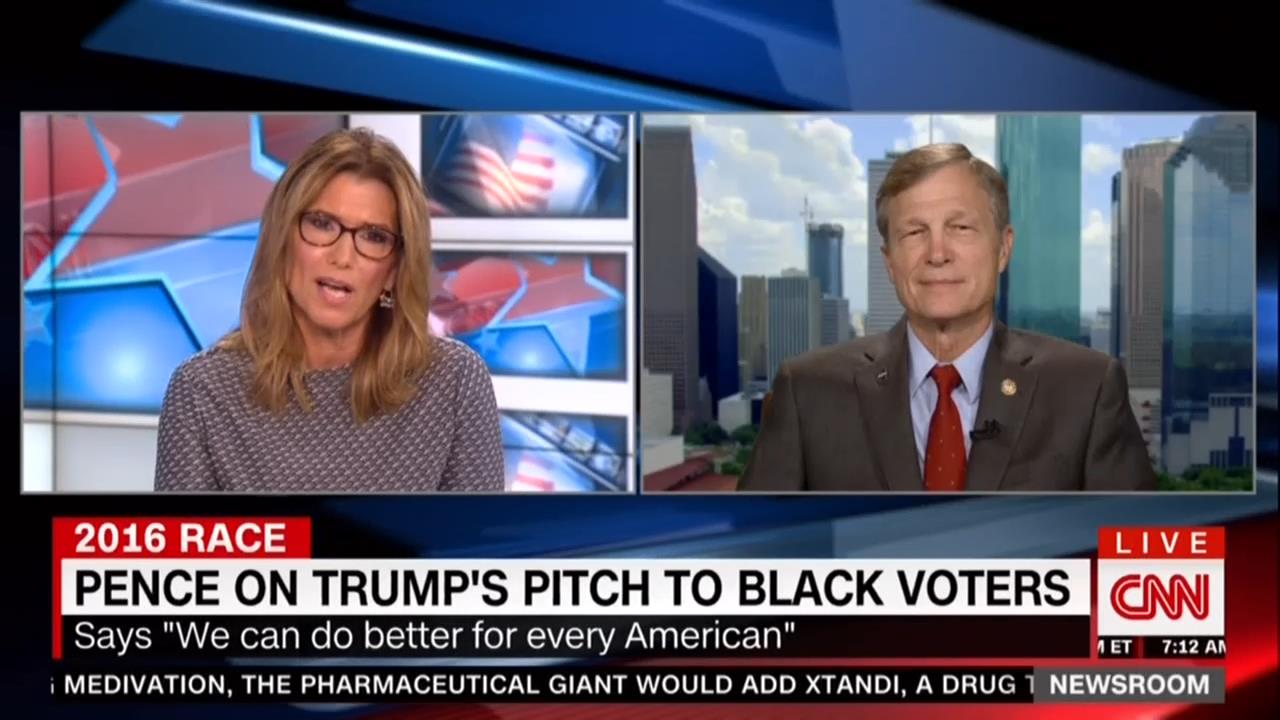 CAROL COSTELLO: Mr. Trump is trying to reach out to minority voters -- and not just Hispanic and Latino voters. He says Democrats have failed African-Americans, so why the hell not vote for him? Our Alisyn Camerota asked his running mate, Mike Pence, about his pitch. Here's Mike Pence's take. Let's listen.

ALISYN CAMEROTA, CNN NEW DAY: On Friday night, Donald Trump was in Michigan, as you know, and he was making an appeal to African-American voters, and he used some language and messaging that some people have taken umbrage with. I'll read some of it to you. He said, "You're living in poverty, your schools are no good, you have no jobs, you have 58 percent youth unemployment. What the hell do you have to lose?" That was an appeal to vote for the Trump-Pence ticket. What do you think of that message?

CAMEROTA: So, in terms of the language that he used on Friday night, you were okay with it? The "you're living in poverty," "you have no jobs," "What the hell do you have to lose?" You are okay with it being that blunt of a message?

PENCE: Well, look, Donald Trump is not an experienced politician who carefully selects his words. He speaks right from his heart, right from his mind.

COSTELLO: Here's the thing, Congressman. Many African-Americans say Trump's outreach was not for them, but for white voters who think Trump is racist because Mr. Trump chose to make those remarks in front of a largely white audience. Can you address that?

COSTELLO: He's got one percent support among African-Americans, and I just want to get to this. Do you think it would be more effective perhaps if Mr. Trump would apologize for the birther talk or that President Obama founded ISIS? Do you think those things might be turning off African-American voters? And if Mr. Trump just said, "You know, I didn't mean that stuff about the birther stuff," would that appease voters? Should he say something like that? Should he apologize?