Appearing as a guest on Friday's Real Time with Bill Maher on HBO, left-wing film maker Michael Moore asserted that "race hatred" by the Republican party in Michigan was to blame for Flint's water pollution problems, but he also ended up placing some of the blame on President Barack Obama for assuring people that the water was safe to drink.

The two left-wingers also spent about four minutes musing over the many things they like better about Europe than the United States. although they both ironically ended up admitting they prefer to live in the U.S.

In the Flint discussion, after recalling decisions by Republican Governor Rick Snyder to make changes in the water supply to Flint, Moore tagged it a "hate crime" motivated by "race hatred" by Republicans:

Within a few months, they realized they were poisoning people, and the word came down, "Don't say anything, doctor the books," and they let people continue to drink this water and did nothing about it, and I think that is a crime, and they did it -- I know they did it because it's a black city, it's a poor city. They wouldn't do this to Bloomfield Hills or Ann Arbor or Gross Point. This was a hate crime. It was a hate crime based on this race hatred of this particular party-

After Maher jumped in to push back that there have been environmental disasters in other places like Love Canal that were majority white, Moore added:

Yeah, but who really -- once they discover Love Canal, everybody starts to work on it to try and fix it. Not in Flint. They went another nine months trying -- hoping nobody would pay any attention because, "Oh, these are just a bunch of black people, poor people, they have no lobbyists, they have no money in this." And so, to this day-

The two then surprisingly implicated President Obama as they continued:

MAHER: But you blame Democrats, too. I mean, you were very hard on Obama.

MOORE: I'm very upset that President Obama went there and drank a glass of water and said, "It's okay, everybody, to drink the water." It was just a stunning, sad thing to see happen, and-

MAHER: Because he took the light off of it, you're saying? He made people think it's-

MOORE: Completely. Nobody's going to worry about it anymore. President Obama drank -- but look at the picture on the front page of the Times, he's like, "Don't make me drink this," he's like -- no, it's really shameful that he did that.

A bit earlier, while plugging Moore's latest film, Where to Invade Next, the two spent time discussing things they think are better in Europe than in the U.S., and suggested socialist Bernie Sanders was on to something in his views: 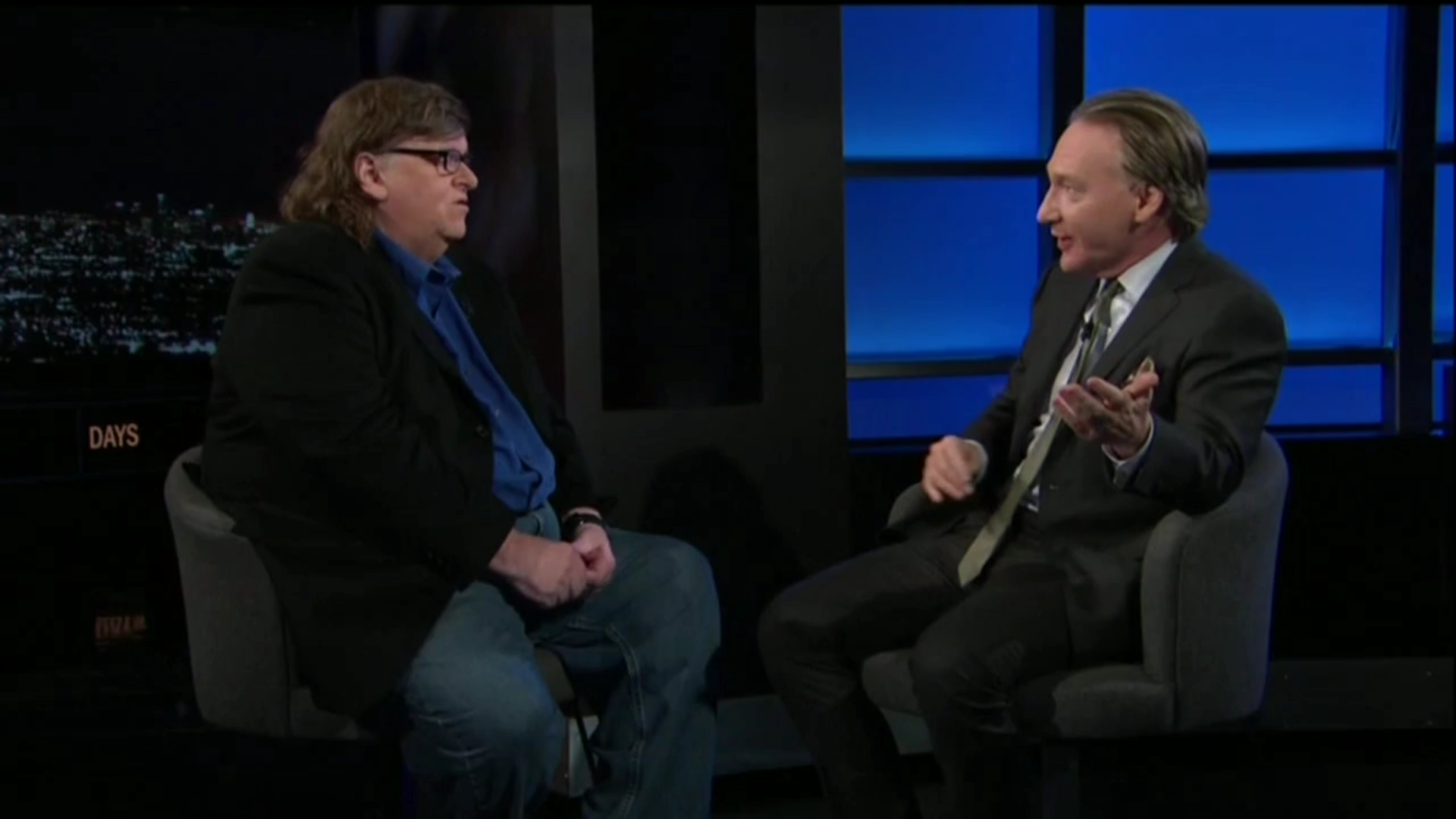 MOORE: We pay a lot more than the French and the Norwegians and all these countries-

MAHER: And get less.

MOORE: And get less. And get far less.

MAHER: And this is, I mean, we're talking in broad parameters here, but this is basically what Bernie Sanders is selling. This is really why he has caught on. I keep -- it's a new deal. You pay a little more in taxes, but you get so much more.

After spending more than three minutes portraying Europe more favorably than the U.S., they ended up admitting that they like living in the U.S. better:

MAHER: I mean, not that Europe is perfect. Look, Europe economies-

MOORE: No, there are many problems. I would rather live here, but-

MOORE: -but I went there to show people the good things that are happening because all we hear about are, "Oh, Italy is a mess," you know, forming a new government, it's 10 million lira to a dollar. They never show the real life that they have and how happy they are and why they live four years longer than we do.