Appearing as a guest on Wednesday's CNN Tonight, former New York Times columnist Frank Rich -- now of New York magazine -- accused GOP presidential candidate Dr. Ben Carson of receiving support from a "racist, bigoted part of the Republican base," in the aftermath of Dr. Carson's comments opposing the election of a Muslim President. A bit later, he even accused GOP candidate Mike Huckabee of "bigotry" against homosexuals.

After a discussion of GOP candidate Donald Trump's tendency to make controversial comments that lead to increases in his support, the CNN host brought up Dr. Carson. Lemon:

One person who is also benefiting from that possibly is Dr. Ben Carson when he made his comments about necessarily he wouldn't support a Muslim as President of the United States. He said, after that comment, money has been pouring in. Why do you think he's benefiting from this?

Because there is a racist, bigoted part of the Republican base. His own campaign manager said to the New York Post a couple of days ago, the Republican primary electorate is 80 to 20 on our side on these anti-Muslim comments.

After a bit more back and forth, both voiced their conclusion that "Muslim is the new black": 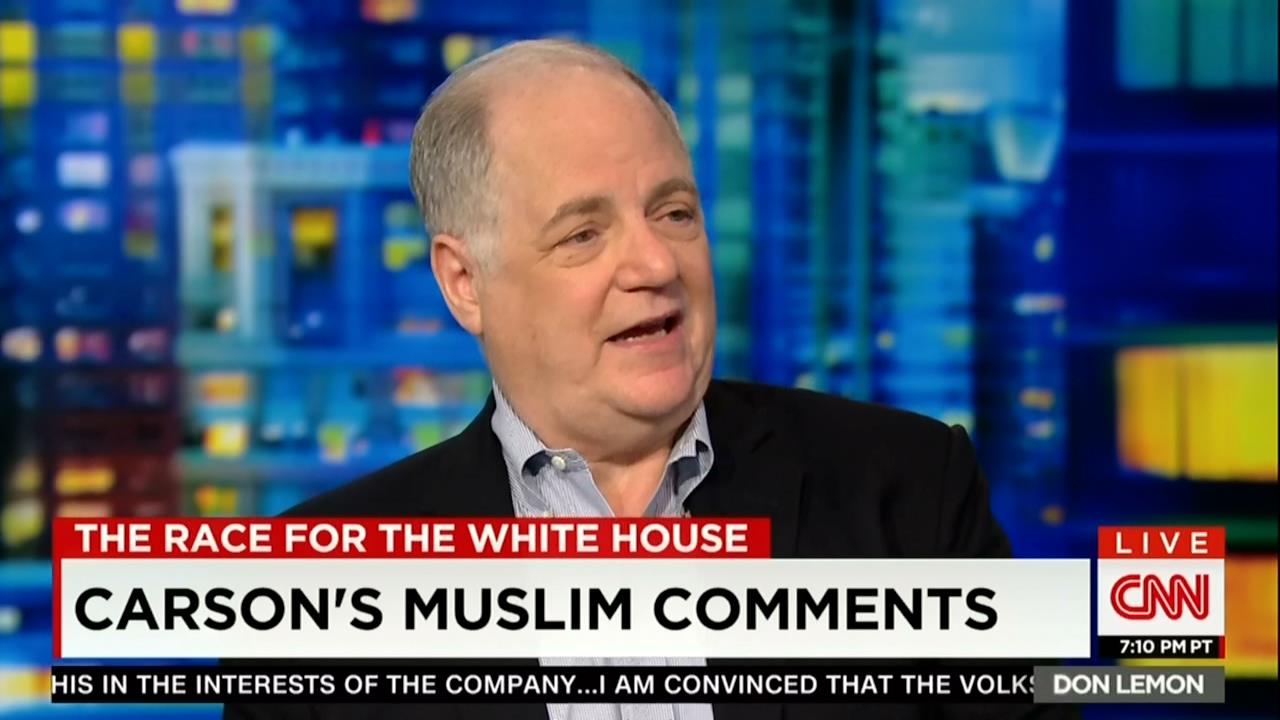 DON LEMON: He's a minority. He's an African-American. I mean-

FRANK RICH: I don't get it. You know, he's a devout Christian, and maybe he thinks-

LEMON: -out there appealing to -- he is a black man.

RICH: He is a black man, and there's been Republican support for other black candidates -- Herman Cain last time. Nonetheless, it doesn't mean it applies to everybody, but I think Muslims are the new, sort of, target of this kind of racism.

LEMON: Muslim is the new black.

RICH: Muslim is the new black.

LEMON: Muslim is the new black.

Lemon then brought up GOP candidate Mike Huckabee's recent charge that President Barack Obama does not behave like a Christian, leading Rich to see "bigotry" against homosexuals. Rich:

This is another form of bigotry. This is homophobia. This is a coded way of saying, "We don't like Obama because he supports a Supreme Court decision that a person of faith like Kim Davis violated and that we should therefore support people who break the law of the land." And that's what that's about, I think. It's just, you know, a dog whistle about that.

A bit earlier, during the discussion of Trump, the two even fretted that GOP candidate Jeb Bush had picked up from Trump what Rich viewed as the "dreaded" term of "anchor babies," with Lemon even complaining about Bush calling for "speaking English and assimilation":

RICH: So for people to say he's (Trump) not a real Republican, he has many of the views of the Republican base. He just says them out loud instead of encoding them and making them sound nice.

RICH: It is, and look how people follow him. He uses the dreaded, correctly dreaded term "anchor babies," and the next thing you know, Jeb Bush is offending anchor babies and applying it to Asian-Americans and not just Hispanics.

LEMON: Yeah. and then Jeb Bush is talking about speaking English and assimilation as well, right, after Donald Trump does it.