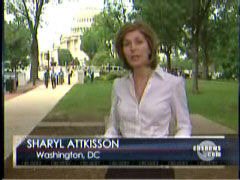 On Friday’s CBS Evening News, correspondent Sharyl Attkisson filed a report recounting mortgage company Countrywide Financial’s history of offering special deals on loans to government officials – including figures with connections to President Clinton, President Bush, and President Obama. But, while the two most prominent figures currently still in government who are implicated in the scandal are Democratic Senators Christopher Dodd and Kent Conrad, neither Senator was identified by Attkisson as a Democrat. Even while soundbites of the two Senators were shown, there was not even an on-screen label showing the party of either Senator. Until the end of the story, the only clue viewers had as to either Senator’s party was when Attkisson identified Dodd as being the "head" of a Senate committee.

It was not until the end of the report, after a soundbite of Republican Congressman Darrell Issa – whose party was labeled on screen – complaining about Countrywide’s actions, that Attkisson finally hinted that Democrats may have more to fear from the scandal as she relayed that "Democrats are blocking a Republican effort to subpoena Countrywide documents."

Below is a complete transcript of the report from the Friday, July 31, CBS Evening News: 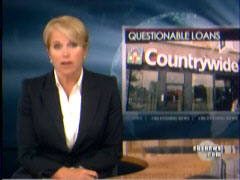 KATIE COURIC: Countrywide Financial was the lender at the heart of the mortgage meltdown, but, when business was booming, one whistle-blower says the company went looking to influence the powerful in Washington, including members of Congress and a host of others. Sharyl Attkisson has this "Follow the Money" investigation.

SHARYL ATTKISSON: At the height of the subprime boom, perhaps nobody gave out more risky loans than Countrywide Financial. But while the government debated how to regulate the mortgage industry, Countrywide pursued a shrewd strategy – attempt to curry favor among influential people by offering them sweetheart loans. Special terms included knocking a full point or one percent off a loan on a $2 million VIP mortgage. That's a perk worth $20,000.

ANTHONY SALERNO, ATTORNEY: That was the whole idea. It wasn't just to give them a good deal, it was to make sure they knew or at least they believed that they were getting a special deal.

ATTKISSON: Anthony Salerno represents former Countrywide executive Bob Feinberg. He worked in the VIP section that offered preferential treatment to so-called "friends of Angelo" – customers referred personally by CEO Angelo Mozilo. That includes Senators Kent Conrad and Chris Dodd, who just happens to head the committee that oversees the mortgage industry. They each received at least two VIP loans and are subject of a Senate ethics investigation. They declined our interview requests but have denied wrongdoing in other interviews. 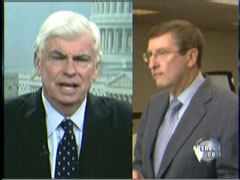 SENATOR KENT CONRAD (D-ND) (NOT LABELED ON SCREEN): I did absolutely nothing unethical here.

SENATOR CHRISTOPHER DODD (D-CT) (NOT LABELED ON SCREEN): No special deals. No one ever offered one.

ATTKISSON: But CBS News has learned that Countrywide's VIP program went far beyond two Senators. VIP mortgages were given to President Clinton's former Housing Secretary Henry Cisneros and President Bush's Housing Secretary Alphonso Jackson. Jackson's daughter even got VIP loan status when an internal Countrywide e-mail noted her father is "expected to be confirmed as Secretary" of HUD. Also on the list, Franklin Raines, then-CEO of Fannie Mae. Fannie Mae bought billions in toxic Countrywide loans that defaulted at taxpayer expense. And former Fannie Mae CEO James Johnson, one-time advisor to President Obama. Some of the most flagrant connections were with the House Financial Services Committee, which had oversight authority over Countrywide. Clinton Jones, a chief counsel for the committee, got VIP treatment, and internal Countrywide e-mails leave no doubt as to why. Jones is "an advisor to ranking Republican members of Congress responsible for legislation of interest" to the industry and "of importance to Countrywide." A committee aide asked Countrywide to help his sister and brother-in-law after they got turned down for refinancing. Countrywide obliged, calling the staffer "an aide to a senior member of the House Financial Services Committee," "a big supporter of Countrywide's," and "very important to us." Congressman Darrell Issa is spearheading a House investigation.

REP. DARRELL ISSA (R-HOUSE OVERSIGHT AND GOVERNMENT REFORM COMMITTEE): This is a pretty vast attempt to influence government that did not benefit the American people in this meltdown of the economy around the world.

ATTKISSON: Democrats are blocking a Republican effort to subpoena Countrywide documents. Some of the people named in this report have said they didn't know they were getting preferential treatment. For now, it's unclear whether there was anything illegal and whether Countrywide was able to fend off regulations by winning favor with the right people. Sharyl Attkisson, CBS News, Washington.