No 'Spotlight' On Hollywood Child Rape 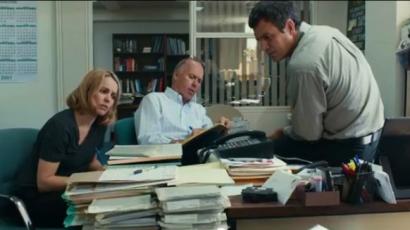 Whether Spotlight wins an Oscar for best picture is not as important as the politics that has engulfed the film.

In the run-up to the November 6, 2015 debut of Spotlight, reviewers hailed it as an eye-opening account of the sexual abuse scandal in the Boston Archdiocese. But Hollywood has no interest in turning its cameras on itself, which is why the public's eyes have been shut tight from seeing a movie that documents child rape in Tinseltown.

In 2011, when word surfaced that actor Corey Feldman was going public with accounts of child sexual molestation in Hollywood, it caught the attention of Boston producer Matthew Valentinas. He had been contemplating doing a film on sexual abuse anyway, so when Feldman's revelations hit the news, he decided the time was ripe to strike.

Feldman was interviewed by ABC's Primetime Live in August 2011. He astonished viewers when he exclaimed, "I can tell you that the number-one problem in Hollywood was, and is, and always will be, pedophilia." He said that when he was 14, he was "surrounded" by child molesters who acted like "vultures." Pointedly, he blamed "a Hollywood mogul" for the premature death of his friend, Corey Haim; he died the year before.

Stories about Hollywood sexual predators have been around for decades, but it took Feldman's admission to make people take a second look. As it turned out, however, the interest that Valentinas had in pursuing this story was atypical. For example, quite unlike the way the media pounced when revelations about priestly sexual abuse in Boston were made public in 2002, newspapers didn't go near this story. In fact, following Feldman's interview, only one newspaper, the International Business Times, carried a story about the nest of child abusers in Hollywood.

Valentinas was not deterred. He wanted to give high profile to the pedophilia rings that dot Hollywood, and to that end he enlisted Amy Berg to do the film. She was a veteran: she was nominated for an Oscar for her documentary about molesting priests, Deliver Us From Evil. Berg's film, An Open Secret, is a devastating look at the way Hollywood predators manipulated, intimidated, and raped aspiring child actors. The rapists were not strangers — they were their mentors. To be specific, they were managers, publicists, and agents, men who were held in high esteem by everyone, including the child actors and models whom they molested. Not only did they use their positions of power to sexually abuse innocent kids, they did so with impunity: no one blew the whistle on them.

Valentinas assumed it would not be hard to find distributors interested in his film. He was wrong. "We approached most studios and everyone passed," he said. "We thought, we have a great director, everything was cleared and legally vetted — why would it be a risk for a company to take it?"

It is not hard to figure out why Valentinas hit a brick wall. He was treading in dangerous waters, offending the Hollywood establishment. For similar reasons, no one in Hollywood was interested in picking up Mel Gibson's classic, The Passion of the Christ. Whenever a film maker cuts sharply against the Hollywood grain, he can expect to be stonewalled. This is the way the "tolerant class" operates: it works overtime to ensure culturally correct movies.

The resistance to An Open Secret was evident from the beginning. On September 8, 2014 New York magazine said, "The Amy Berg documentary...has been slow to find distribution." It also noted that "discussions with Mark Cuban's Magnolia Pictures went nowhere." Two months later, Screen International observed that "few distributors will dare to release a film with such incendiary claims."

Fast forward to the spring of 2015. Deadline did a piece titled, "'An Open Secret's' Difficult Road to Distribution," noting that "Executive producer Gabe Hoffman wouldn't name names, but said, 'We went to everybody and anybody at all the biggest companies and got turned down everywhere.'" The Guardian, an influential U.K. publication, alerted readers to what was going on: "But the content of the film...had led to difficulties getting people to see it. It's been rejected by major film festivals, including London, [and has] struggled to find distribution...."

On September 17, Diane Dimond, a columnist for the Rockland County Times, really let loose: "I've expressed hope that throngs go to see the documentary but, not surprisingly, the producers have had a difficult time getting movie theaters to agree to show it. Are movie-house operators afraid of offending Hollywood executives?"

Dimond added that "The union representing actors (SAG-AFTRA) has threatened to sue Amy Berg, the director of the film." She concluded, "Note that you haven't heard a peep from studio executives, big talent agencies or entertainment unions about steps they've taken to protect young actors against sexual predators."

An Open Secret has played at theaters in Los Angeles, New York, Denver, and Seattle, and it was accepted for the documentary competition at the Stockholm International Film Festival last November. But don't look for it to come to your neighborhood cinema anytime soon. The Hollywood moguls, who claim a fierce allegiance to free speech, don't want you to know about the dirty little secret of child rape in Tinseltown.