Here's What the Liberal Media Think About Prayer (Warning: Obscenity) 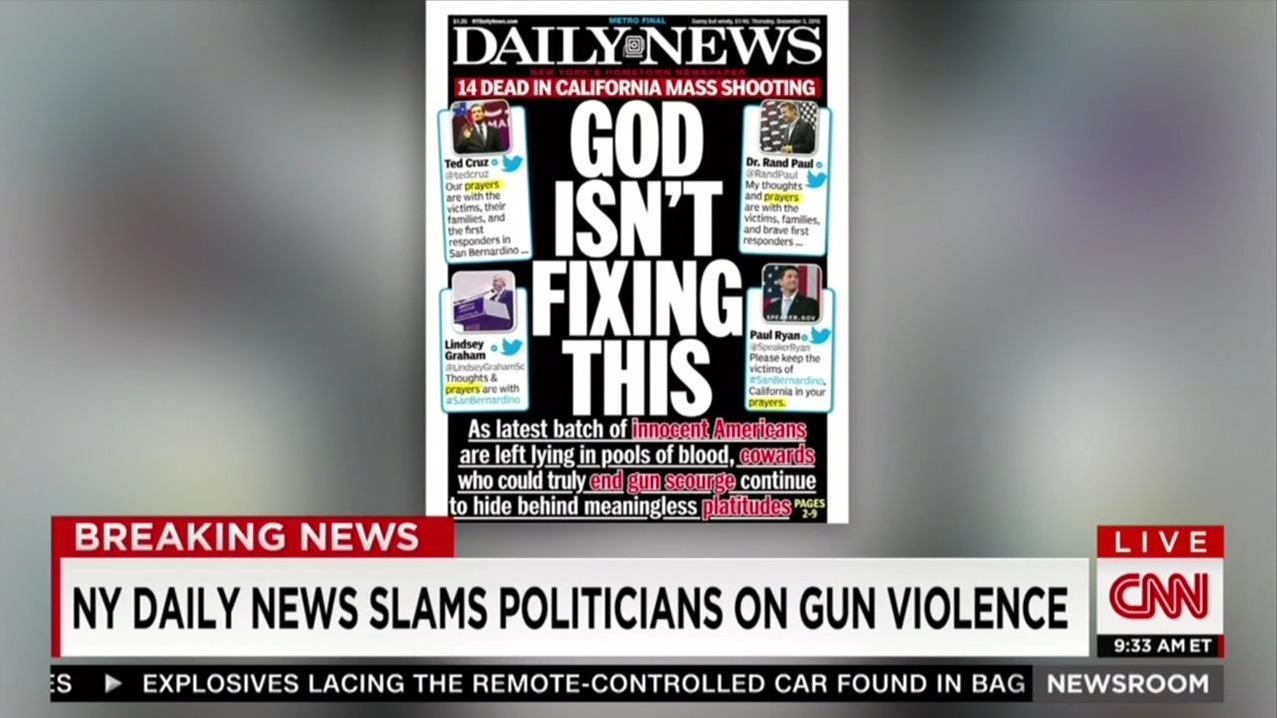 In the three years since the mass shooting by ISIS supporters in San Bernardino, California, the liberal media have grown increasingly hostile to the gracious tradition of praying for shooting victims, suggesting prayer is an obstacle to their left-wing gun control agenda.

Multiple MRC studies have found that broadcast and cable news networks routinely advocate for gun control after prominent mass-shootings. This record of undisguised activism, paired with a longstanding disdain for traditional Christianity among agenda setters on the left, has culminated in this recent media trend of prayer-bashing.

Three years ago today, the New York Daily News ran a front-page headline reading “God Isn’t Fixing This,” which excoriated conservative lawmakers for extending their thoughts and prayers to the victims of the December 2015 San Bernardino shooting.

The cover boasted equally spiteful subheader which ridiculed prayers as “meaningless”: “As latest batch of innocent Americans are left lying in pools of blood, cowards who could truly end gun scourge continue to hide behind meaningless platitudes.” Broadcast and cable hosts immediately heaped praise upon the December 3 article, and the coverage dragged on for days. 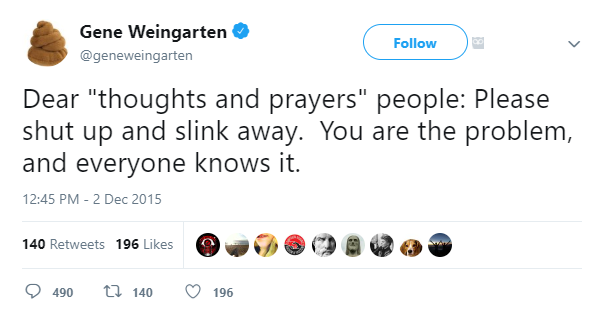 The liberal media's contempt for prayer has since snowballed into an unapologetically mainstream phenomenon. See the video below for a glimpse of this burgeoning petty crusade:

After the Florida Pulse Nightclub shooting in June 2016, MSNBC’s Lawrence O’Donnell treated viewers to a particularly impassioned tirade: “Thoughts and prayers. That’s all we get from the politicians who choose to protect guns more than citizens: thoughts and prayers.” As he concluded his sermon, O’Donnell huffed: “Thoughts, prayers, silence, and lies.”

In a New Day segment about February’s Marjory Stoneman Douglas High School shooting, CNN’s Chris Cuomo complained bitterly about the “always-perfunctory ‘we’re praying for the victims.’” He punctuated that remark with a rhetorical: “What kind of prayer is one that promises to do nothing?”

MSNBC’s Chris Matthews brought the trend of prayer-bashing to heretofore unseen levels of absurdity last month. On November 8, the Hardball host vented that offering thoughts and prayers to shooting victims ought to be illegal:

Thoughts and prayers? I’m sorry, that should be outlawed. I know it’s well-intended in some cases, but usually it’s a throwaway line by a staffer who knocks off some script — some product, some wordage — for somebody political to make it sound like they give a damn.

This summer, a Pew Research Center study found that a majority (55%) of Americans say they pray once a day. Apparently, liberal journalists don’t mind alienating believers if they believe it will get them closer to their liberal policy objectives.