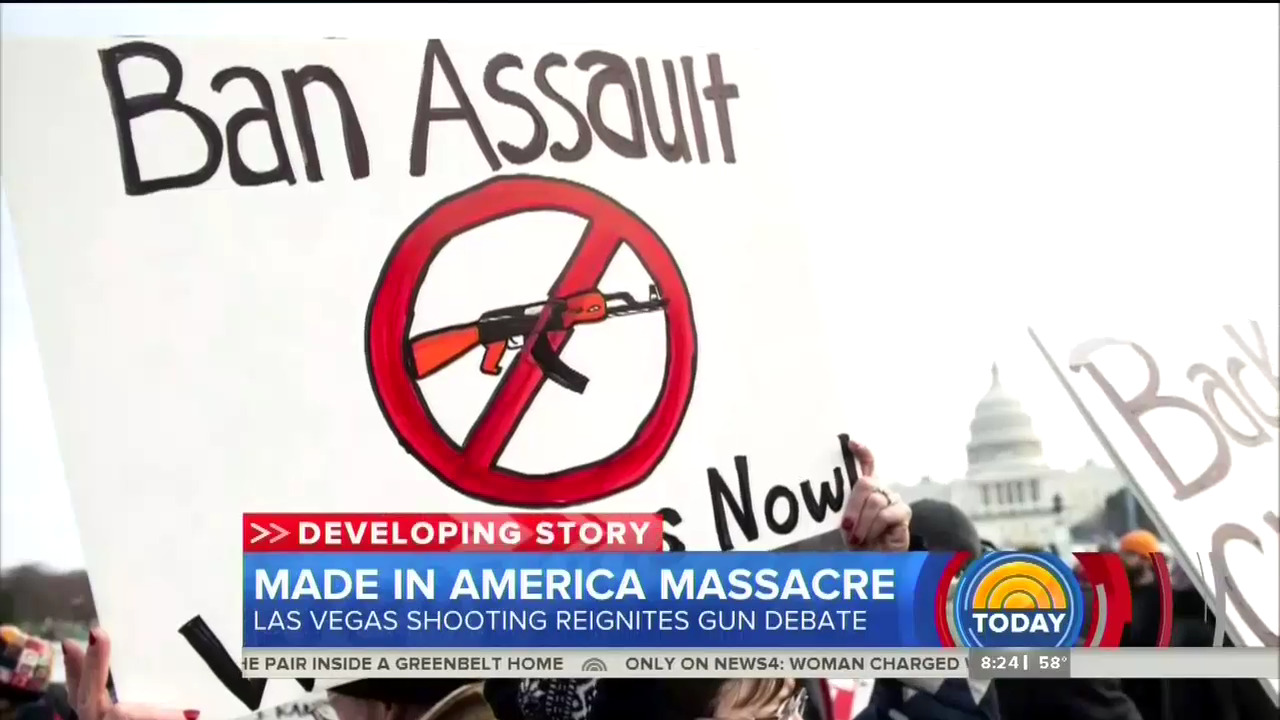 In the aftermath of the Las Vegas shooting massacre, the Big Three (ABC, CBS, NBC) networks wasted little time in exploiting the tragedy to advance their anti-gun rights agenda. In just six days (October 2 through October 8) of coverage, the networks filled their evening and morning show programs with statements favoring gun control over gun rights by a ratio of roughly 5 to 1.

MRC analysts reviewed all statements that took a position on overall gun policy by anchors, reporters, guests and soundbites, beginning with the morning of October 2 through the morning of October 8, and found time spent arguing in favor of more gun control (30 minutes, 17 seconds) overwhelmed time devoted to supporting gun rights (6 minutes and 27 seconds.)

Separate from the overall arguments on gun rights, the networks also devoted 28 minutes and 30 seconds to regulation of bump stocks (devices that allow semi-automatic guns to perform like fully-automatic guns) that would essentially put them in line with already existing laws about fully-automatic weapons. With the NRA and many Republican lawmakers signaling they would be open to looking at regulation of bump stocks, the thrust of the coverage favored some sort of restrictions. However 1 minute and 45 seconds was spent on those who opposed any new regulations, even those on bump stocks. 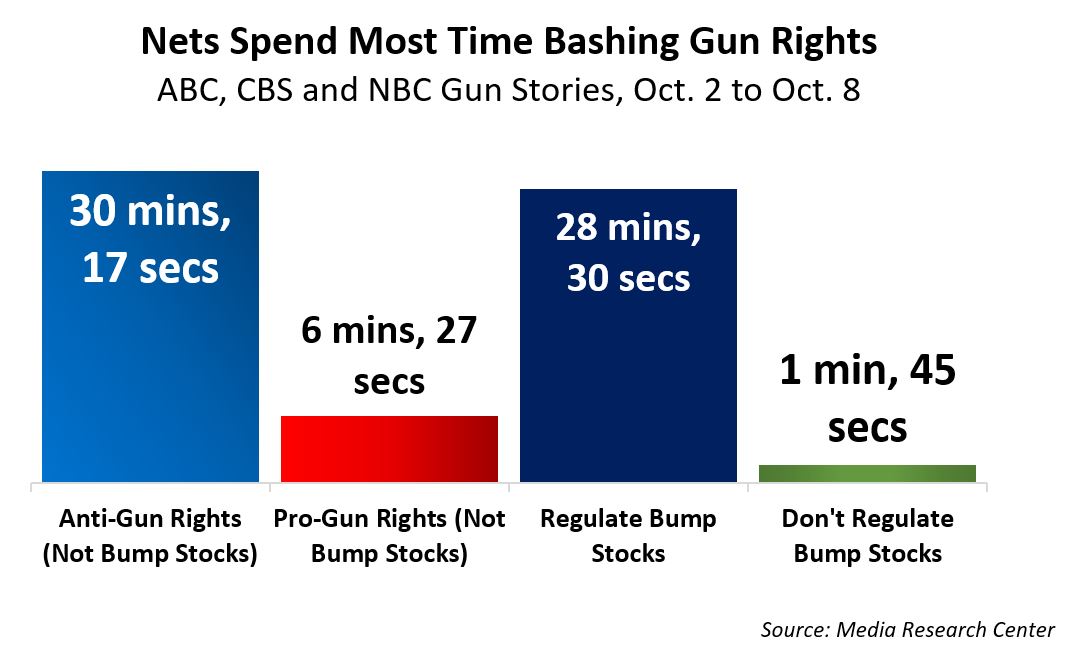 The day after the shooting on October 2, anchors and correspondents started spreading Democratic talking points on the attack. On NBC Nightly News, correspondent Hallie Jackson seemed despondent that the President didn’t immediately call for gun regulation “The President responding to the attack with remarks that called for unity but not gun control.” Over on the CBS Evening News, Major Garrett also seemed disappointed: “After a mass shooting in Oregon, candidate Trump said gun laws have nothing to do with such crimes, that it’s all about mental illness....There is no sign President Trump has changed his mind on the topic.”

The campaign against gun rights was pushed by the likes of former NBC Nightly News anchor Tom Brokaw, who on the October 3 Today tried to energize anti-gun voters: “I would say to this audience, and any audience before which I appear these days, we are where we are because of the power of people who wanted these kinds of guns. And the NRA managed to organize them and get them as a political force in America. So the question is, if you’re not happy with what has happened, your individual obligation as citizen is to organize on the other side. And that’s possible as well. The NRA has a lot of money, obviously. And if you’re running against the NRA, in a lot of the western congressional districts for example, you’re portrayed as a traitor to America. You know, you’re not in favor of having people who have weapons, and that’s after all, how the country started. We’re a long way away from that Second Amendment in which we said that a militia is important to our country....I think that we have to step up, all of us, and speak up.”

Aside from the personal opinions of anchors and reporters, viewers of the network shows were subjected to soundbites from anti-gun activists: On the October 5 edition of ABC’s Good Morning America, Cecilia Vega included a clip from liberal Congressman John Lewis railing against gun-rights advocates: “How many more must die? 100? 1000? 10,000? A million? What is your blood price?”

On the October 3 Good Morning America, anchor George Stephanopoulos blamed the White House for ignoring gun control. “His team did try to stop any debate about gun control before it begins,” and his colleague Robin Roberts gushed over late night talk show host Jimmy Kimmel’s  “emotional plea” against gun-rights that  “echoed the sentiments of so many.” Roberts praised Kimmel for “taking a big stand on gun control” and “calling out lawmakers” for shushing talk about gun control.

On the bright side, there were rare moments of statements in favor of gun rights. On the October 6 CBS Evening News correspondent Anthony Mason talked with female fans of the AR-15 like Robyn Sandoval who, after Hurricane Katrina, was motivated to become properly trained in firearms: “I wanted to be children’s first responder. I wanted to protect them....I like having access to my AR. We have one for home defense.”

NBC was the most stridently anti-gun rights network. By a whopping 10 to 1 ratio, NBC devoted more time to arguing in favor of gun control (12 minutes, 39 seconds) to time that supported gun rights (1 minutes, 15 seconds).