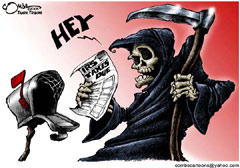 Imagine the audacity of wanting to dispose of your own money as you see fit? The idea is hateful to Bill Scher of the Huffington Post, who demanded in "Super Wealthy Deathly Afraid Estate Tax Would Reduce Deficit" on March 9 that the wealthy "pay their fair share."

Scher railed against the Bush tax cuts, and asserted that a 35-45 percent inheritance penalty (the estate tax or death tax) isn't punitive enough to stem the deficit crisis.

"But those massive tax breaks to the superwealthy don't quite have the same juice they used to. Especially, the estate tax - levied on the inheritances of the wealthiest heirs in America," Scher wrote. "This year, because of the Bush tax plan from his first term to gradually phase out the estate tax altogether, the estate tax is literally wiped off the books."

But all that wealth is not lost to redistribution forever. "But in 2011, it returns! Inheritance income above the $2 million threshold would be subject to a 55% tax. And after fanning the flames of deficit hysteria to squelch progressive reforms, corporate lobbyists are terrified that the estate tax would actually help reduce the deficit."

Citing a Bloomberg report saying, "‘a revived estate tax at pre-2001 levels would collect more than $34 billion next year and about $410 billion through 2019.' The wealthiest heirs having to pay their fair share and help cut the deficit. The horror!"

As the National Taxpayers Union and Daniel J. Mitchell of the Cato Institute note, truth is the "estate tax" hampers job-creation, promotes the concentration of wealth, hits minorities particularly hard (reminiscent of "sin" taxes), and contributed just 1.14 percent to federal revenue in 2008.

And as previous reported by the Business & Media Institute, the U.S. already has one of the highest estate tax rates in the world.

But Scher could grasp neither the practical reality nor the immorality of confiscatory taxes on legal, fairly earned wealth. "What's stunning is the superwealthy's lobbyist posse and the Senate's conservative minority could just take what the House has already passed: locking in the estate tax at 45%, while exempting all inheritances below $7 million. That ain't chump change! But that's not good enough for the heirs who have no interest in paying their fair share and reducing the deficit."

But those greedy rich aren't satisfied.

"A $10 million exemption and a 35% rate above that is not very sweet at all," Scher continues, alluding to previous proposals from Senators Jon Kyl (R-AZ) and Blanche Lincoln (D-AK) to lower the rate. "It's a bitter windfall to the Paris Hilton set. But thanks to the combination of their greed, and their exploitation of deficit hysteria, the superwealthy may actually have to pay their fair share on their inheritances after all."

In a world where the top-10 percent of income-earners in America regularly pay 70 percent of the nation's federal income tax, and the bottom-50 percent pay close to nothing, what exactly is it you mean by "fair share"?

Cartoon by Paul Combs, image via the National Tax-Limitation Committee