CNN's New Day co-host Alisyn Camerota had Brian Stelter interview her about her new book, Amanda Wakes Up. In this interview on Tuesday's New Day, she took another jab at the network that made it possible for her to succeed:

I started writing it in 2012, but I didn't know then that it was going to be a book. I started writing it because that was also -- we forget now that we've just lived through 2016 -- that was also a crazy presidential race. And it was filled with lots of colorful characters. And, frankly, I was struggling during part of that time because there were so many ethical issues, particularly when my boss at the time had one version of how he wanted things depicted. And so I started writing things down to try to kind of process.

Camerota worked for the Fox News Channel for 16 years before moving to CNN in 2014. Yet, it is strange she is now constantly criticizing her old employer for skewing reporting when her new network's boss has all but declared war on the President. Talk about skewed reporting, check out these examples from her own reporting:

Camerota ended the interview discussing what her fictional character (who is also a morning TV host) discovers about journalism:

STELTER: And the title, Amanda Wakes Up, what is her awakening? What does she realize about journalism?

I could think of one person in particular who needs "an awakening for how to be a truly fair journalist."

Below is the complete transcript: 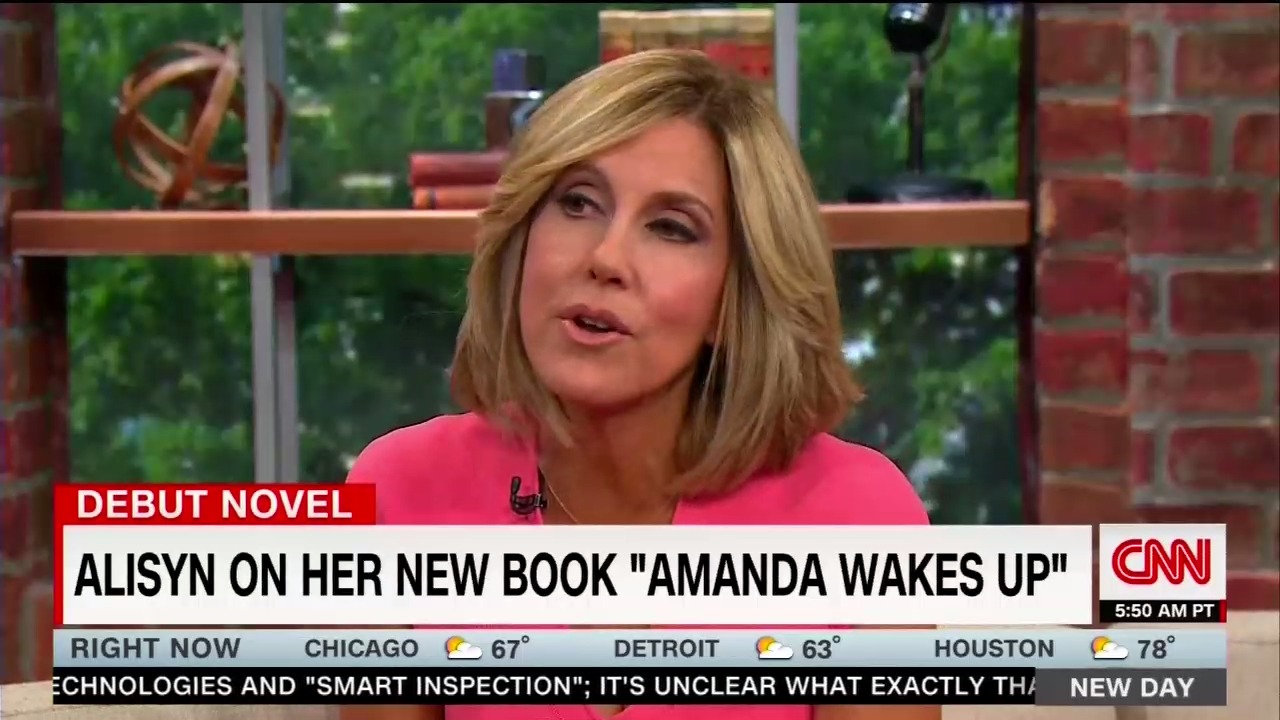 ALISYN CAMEROTA: So, this is a very exciting day for me. My first book comes out today. It is a novel called "Amanda Wakes Up." It's about an idealistic young journalist trying to navigate the cable news world during a crazy presidential race. So now to talk about it, I'm going to switch roles. I'm going to turn it over to our "Reliable Sources" host, Brian Stelter, who is going to interview me and ask questions about the book. Brian, great to have you here.

STELTER: When you first told me you were writing a novel about the world of morning TV, I wondered how much was real and how much was fictional.

CAMEROTA: Well, you write what you know, as they say, for your first book. So it's based on my 25 years in news. The all of my experience in this business. And all of the sort of ethical dilemma as we face and the challenges that we face every day is melded in there.

STELTER: It feels a lot like it's about the 2016 election. So when did you start writing?

STELTER: That long ago.

CAMEROTA: I started writing it in 2012, but I didn't know then that it was going to be a book. I started writing it because that was also -- we forget now that we've just lived through 2016 -- that was also a crazy presidential race. And it was filled with lots of colorful characters. And, frankly, I was struggling during part of that time because there were so many ethical issues, particularly when my boss at the time had one version of how he wanted things depicted. And so I started writing things down to try to kind of process.

STELTER: I think when people read it and they see these characters, they're going to think it's about 2016. So it's incredible that you did all that beforehand.

CAMEROTA: Well, look, I mean I knew that 2016 was coming. So as I was writing it, even in 2014, I was making a pretty safe bet that there would be a female president candidate --

CAMEROTA: And that there would be some sort of larger than life male candidate. Donald Trump was already threatening to run. So I can't say that those didn't end up coloring some of it. But I handed this book in -- I sold this book, I should say, at the beginning of 2015. And Donald Trump didn't get into the race until June of 2015.

STELTER: Your character's named Amanda Gallo. How is she like you? How is she not?

CAMEROTA: Amanda Gallo is very idealistic. And I like to think on my best days I am too. She's really trying to do the right thing. I think she figures things out faster than I did, to tell you the truth. But, look, it's not just about a young journalist. It's about the story of a woman in the work place and trying to figure out what the line is for her, what -- what -- when enough is enough, what she's willing to sacrifice for success. I think that all of us, you know, can relate to that on some level.

CAMEROTA: I was trying to peel back the curtain on what our lives are like because I've often thought that much of the fun story and interesting story happens behind the scenes. You know, all of the relationships that we all have and all of the decisions that are being made in real-time and the breathless quality to our job. And I've tried to capture that for the viewers because often I've thought, if there were a camera just trained on us, you know, during commercial breaks and everything that the audience would be fascinated.

STELTER: And there's a handsome male co-anchor that you have. Is he based on Chris Cuomo over there?

CAMEROTA: You mean the scathingly handsome Rob Lar (ph) in the book? Rob Lar (ph), the character, is based on some co-workers that I have had.

STELTER: A combination of several --

CAMEROTA: Of several. He's not based on Chris Cuomo. However, I did steal some of Chris Cuomo's best lines. Chris, as you know, is very funny and so I stole some of Chris' best lines, with permission from Chris.

STELTER: OK. We saw last year a real-life stranger than any fiction. So do you feel like you're trying to top what actually happened last year?

CAMEROTA: Well, I couldn't if I tried, but I do think -- I mean -- something funny happened while writing this book, and that is that things that I had already written did come to pass.

CAMEROTA: The talk of illegal voting, OK, that illegal voting had somehow changed the outcome of the election. And, by the way, that's what Donald Trump also came to say.

CAMEROTA: And -- but I wrote it years before that. Because let -- you know, I mean the truth is, I'd like to pretend that I'm psychic, but apparently there are some carenial (ph) favorites. I had in here years ago written that Gisele Bundchen comes on the show and does yoga. I didn't know that Gisele Bundchen actually does do yoga and has a DVD. I think I gave Gisele Bundchen the idea.

CAMEROTA: So there were all sorts of things that I planted and then, you know, my editors and I would scream when we realized that it was actually happening in real life.

STELTER: And the title, "Amanda Wakes Up," what is her awakening? What does she realize about journalism?

STELTER: "Amanda Wakes Up" out today in bookstores everywhere.

CAMEROTA: Yes, it is.

CAMEROTA: Thank you, Brian, Thanks so much.