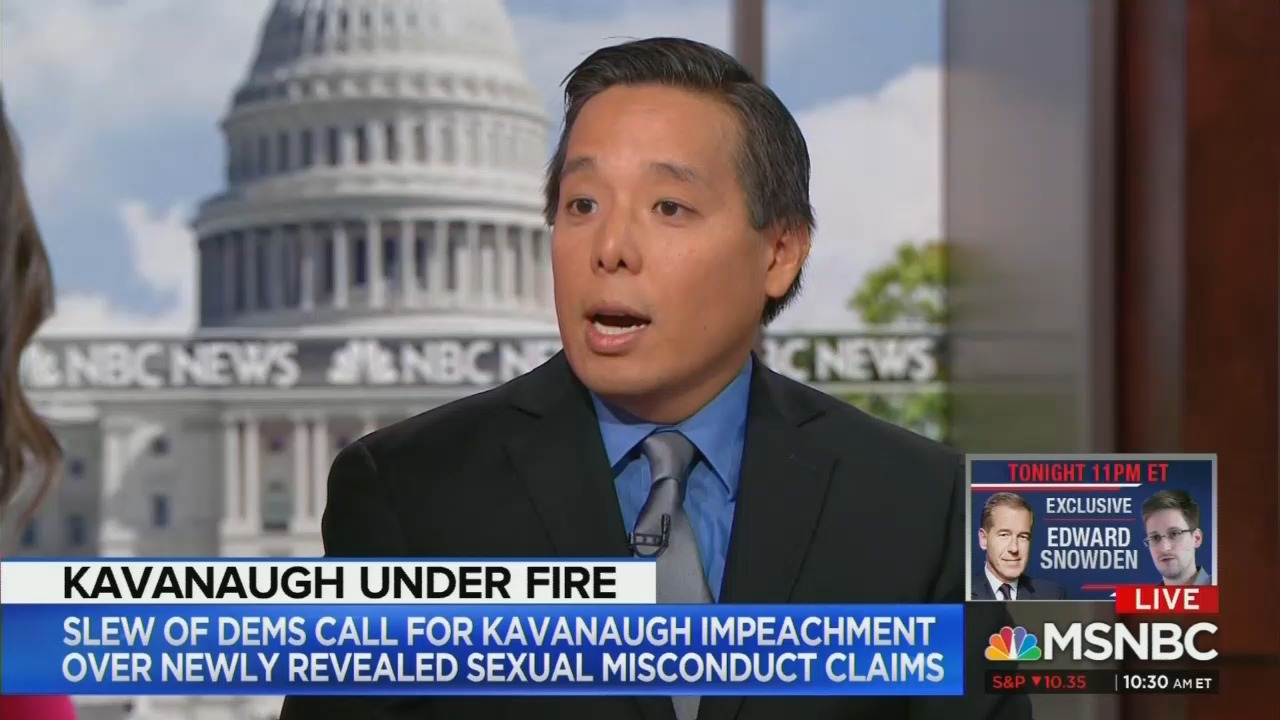 Of all the people MSNBC could have invited on Monday to give a cool, calm, and rationale response to the New York Times issuing a correction to its reporting that the alleged victim of an incident involving Brett Kavanaugh does not remember the incident, they chose former Obama White House Deputy Counsel Deputy Assistant to the President Christopher Kang. Kang's big takeaway from the correction was just because she doesn't remember having Brett Kavanaugh's penis shoved in her face, does not mean it didn't happen.

MSNBC Live host Hallie Jackson began by asking Kang to explain why we should believe this story, considering groups such as his Demand Justice, say we should believe the victim even though the victim does not want to talk about it and her friends say she does not remember the alleged event. Kang said that if Kavanaugh does not like being accused of sexual assault and sexual harassment it is his own fault for not calling the FBI to perform a "a full and exhaustive investigation." Kang then speculated:

The fact that the woman may have been drunk and not remembered the incident in particular doesn't mean it didn't happen. It doesn't mean that there weren't witnesses who have come forward to say that it happened.

The Times' big witnesses in its piece was Max Stier, who just happened to be a former Clinton defense attorney at the same time Brett Kavanaugh was working for Ken Starr.

When asked by Jackson whether Democrats should impeach Kavanaugh, Kang replied "Absolutely," but unwittingly admitted that the Times' piece has nothing to do with that, "We've been calling on House Democrats to take action since April to look into the sham Kavanaugh confirmation process."

During the entire 10:00 hour, there was no conservative alternative to Kang's wild speculation or to rebut his old allegations.

Here is a transcript for the September 16 show: Click "expand" to read more.

HALLIE JACKSON: With me former Deputy Counsel to President Obama now the chief counsel of the group Demand Justice Christopher Kang, Chris thanks for being on set with us.

CHRISTOPHER KANG: Thanks for having me

JACKSON: A lot to talk about. Let me start with this, because you have some conservatives that point out that often groups like yours will say “believe the victim” and in the instance of this new allegation it was made by a male classmate, friends of the alleged victim here the student who was apparently involved in this is saying she does not actually recall what happened. How do you respond to that?

KANG: Well I think that Republicans and Brett Kavanaugh at this point have nobody to blame, but themselves. When there was an opportunity for a real investigation, Brett Kavanaugh could have stood up and said my integrity is so important, the integrity of the Supreme Court is so important, I demand the FBI complete a full and exhaustive investigation. Instead he allowed the White House to curtail the FBI, so they only interviewed ten people, and they didn't look into other possible allegations and now here we are. The fact that the woman may have been drunk and not remembered the incident in particular doesn't mean it didn't happen. It doesn't mean that there weren't witnesses who have come forward to say that it happened. Now we need to take a look and have the FBI examine not only this but the Deborah Ramirez allegation. I think one of the most important aspects of this new reporting is that seven people have come forward to corroborate that and none of them were questioned by the FBI.

JACKSON: So should House Democrats, do you believe, move forward with impeachment proceedings against Supreme Court Justice Brett Kavanaugh?

KANG: Absolutely. We've been calling on House Democrats to take action since April to look into the sham Kavanaugh confirmation process. We think they need to get to the hundreds of thousands of Kavanaugh’s White House documents that were hidden and get to the bottom of hundreds of thousands of dollars in debt that mysteriously disappeared and get to the bottom of the sexual assault allegations and into the FBI investigation which clearly was a sham from the start.

JACKSON: Just this morning, NBC News obtained a letter that Senator Chris Coons sent to the FBI last year about this allegation that we have been talking about, this apparent new one, saying in writing “my office has been contacted by several individuals who would like to share information with the FBI that is relevant to the investigation and they have had difficulty reaching anyone anyone who would collect their information.” Talk about a little bit and this letter apparently had Senator Grassley, Senator Feinstein, copied on it here, talk about the accountability piece to this.

KANG: Absolutely. And I don't really blame the FBI in particular, because the way these back ground investigations work is the White House asked the FBI to do a follow-up. And in this case we know the White House wasn't interested in getting to the truth, they were interested in checking a political box. So they didn't want an FBI investigation in the first place and then when they finally a seeded to pressure because activists and survivors forced Jeff Flake to ask for one. They did the least amount possible, they said you can only talk to these ten people and these are the only questions you can ask. I've never seen something like that before.

JACKSON: Speaking of the White House, the president is calling for the Justice Department to come to Justice Kavanaugh's rescue. How do you read that?

KANG: Well I read that, because that's what he asked the Justice Department to do last fall. He asked come to Kavanaugh’s rescue by not looking into these allegations by hiding these documents from his White House years in the George W. Bush White House and he's asking for them to do it again. It worked once from his perspective, let’s try it again.

JACKSON: So to conservatives who would say that groups like yours and other activists are working to in their view smear Justice Kavanaugh because you don't like where he sits and his position on the Supreme Court, how do you respond to that?

KANG: We don't like the process that Republicans allowed to happen last year. They had an opportunity to call for the truth, to get to the bottom of these allegations. If they didn't think there was anything real to it, why have the FBI rush to such a short investigation. Mitch McConnell kept that Supreme Court seat for open one year after Justice Scalia passed away, why couldn’t he wait two or three more weeks to do a real investigation. I think the answer is clear, he didn't want the truth to come out and now the Republicans are reaping what they sowed.