MSNBC: Even When Trump Gets Tough On Russia, He Still Gives Gifts to Putin 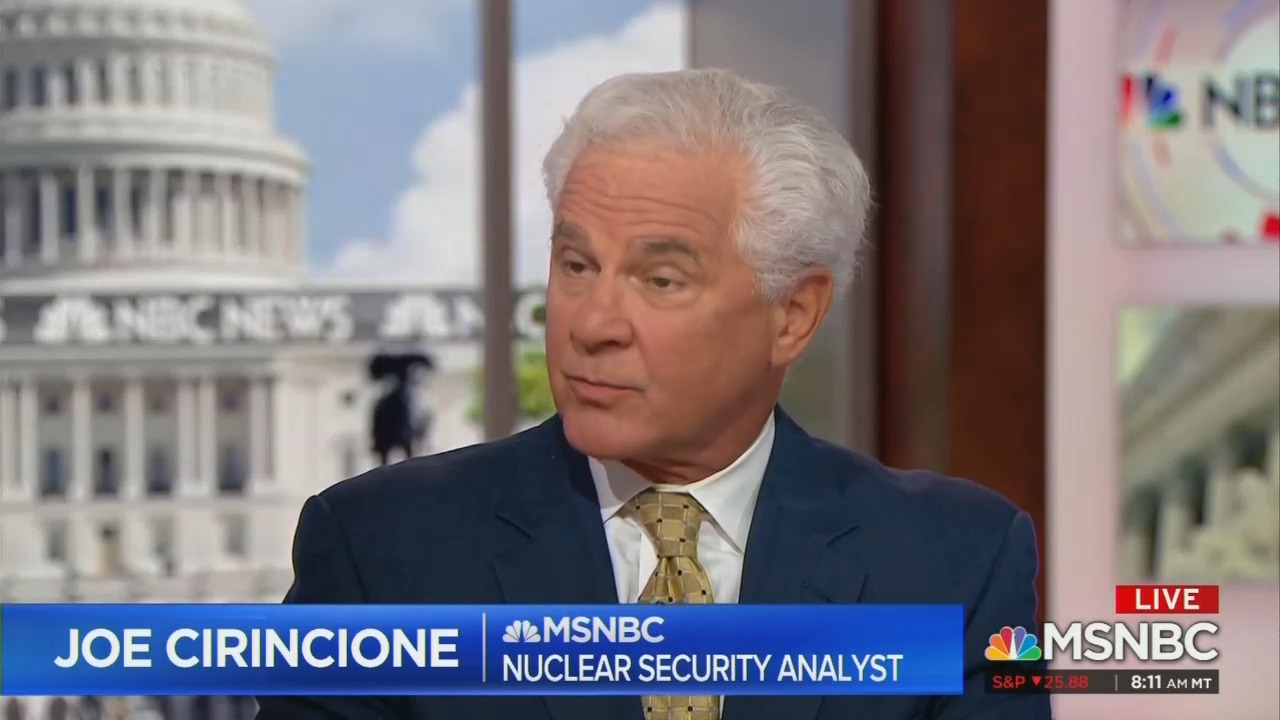 The folks over at MSNBC have created a "heads I win, tails you lose" approach to President Trump and Republican policy towards Russia. The same network that has come up with "Moscow Mitch" for Republicans being allegedly too soft on Russia now claims Trump is giving Vladimir Putin "a gift" by withdrawing from the 1987 Intermediate-Range Nuclear Forces Treaty, because Russia refuses to come back into compliance.

A segment on Friday's MSNBC Live started off well enough with Courtney Kube reporting from the Pentagon that, "The international community has recognized for years now that Russia has been in violation of this treaty for years now, so it’s not a surprise they wouldn't be willing to not only stop developing but pull back what is estimated to be hundreds, if not more, of these missiles they have deployed around the world." Then it went into full Trump Derangement Syndrome as host Hallie Jackson turned to NBC nuclear security analyst Joe Cirincione for his thoughts.

Now, "nuclear security analyst" may be a fancy title, but MSNBC did not do their viewers any justice in describing this guest who would supposedly give a level-headed response, because it is not just that Cirincione is on the left of arms control debates, but he is a full-on radical. MSNBC, mentioned that Cirincione is the President of the Ploughshares Fund, but did not mention that the Ploughshares Fund is a big supporter of the Global Zero movement. Naturally, Cirincione was also an advisor on Bernie Sanders' 2016 campaign and is a big supporter of the nuclear deal with Iran.

According to Cirincione, it was Trump, not Putin, who "killed Ronald Reagan's treaty." (Why is MSNBC repeating Putin's talking points?") Cirincione then called the move "a gift." Furthering his non-sensical argument, Cirincione declared that, "when somebody breaks the law, you don't repeal the law." Except of course, that in domestic law you have law enforcement agencies, but no such thing exists on the international stage. Cirincione then went on to say the move was tantamount to stabbing our European allies in the back and that the move would widen the rift between the U.S. and NATO, despite NATO's Jens Stoltenberg unequivocally backing the Administration on the matter.

Cirincione was not done with his Blame America First ramblings. "The reason we’re pulling out is not because the violations, is because this administration wants to build new nuclear weapons to counter China. We're about to test them later this month. China is going to counter that," he declared as if China was not already doing that.

Cirincione finished by saying that Putin is now "happy" because "He gets to do whatever he wants and the U.S. takes the blame." Why does the U.S. take the blame when it was Putin who violated the treaty? Maybe that will be an easier case for Putin to make because the American media keeps repeating his talking points. Does this make the media a Russian asset?

Here is a transcript of the August 2 show:

HALLIE JACKSON: We got to get to some other news developing this morning, new concerns the the U.S. is barreling toward a new arms race after the Trump Administration announced the U.S. Is officially withdrawing from the decades old treaty with Russia that stopped both sides from developing certain medium range missiles. I want to get to NBC’s Courtney Kube who’s at the Pentagon, with me on set NBC nuclear security analyst Joe Cirincione, President of the Ploughshares Fund. Courtney, let me start with you, this is not altogether unexpected. The Trump Administration has been signaling for a while they wanted to make this move. Put into this context for us here. What does it mean?

COURTNEY KUBE: You're absolutely right, Hallie. The Trump Administration announced back in February that they intended to withdrawal from this decades old INF Treaty which bans, as you said, ground-based ballistic missiles that fly a certain distance, shorter and intermediate range ballistic missiles. They announced back in February, but said “Look if Russia will come back in compliance, they have six months” Well, that’s today, August 2nd was the deadline. There were no indications over the last six months that Russia was moving back into compliance, ‘cause it’s not just that they were not allowed to develop missiles but they were not allowed to deploy them. The international community has recognized for years now that Russia has been in violation of this treaty for years now, so it’s not a surprise they wouldn't be willing to not only stop developing but pull back what is estimated to be hundreds, if not more, of these missiles they have deployed around the world, Hallie.

JACKSON: So, Joe, what are the implications here? Do you see a jump start in a new arms race with Russia?

JOE CIRINCIONE: We are officially in a new arms race. Today Donald Trump killed Ronald Reagan's treaty and gave a gift to Vladimir Putin. Yes, Russia is in violation of the treaty, but when somebody breaks the law, you don't repeal the law. That's what Donald Trump just did. Now, he’s removed any limitations on Putin's ability to build hundreds and deploy hundreds of these missiles. This is a gift to Vladimir Putin. And a stab in the back to European allies. This was a corner stone of their security. And it opens up a new front with China. The reason we’re pulling out is not because the violations, is because this administration wants to build new nuclear weapons to counter China. We're about to test them later this month. China is going to counter that. We're off to the nuclear races.

JACKSON: To your point, the AP reports the U.S. is planning a test flight of a weapon that would have been prohibited in the next coming weeks according to a senior administration official.

CIRINCIONE: Exactly, so don’t get distracted by the violations, yes there were violations, but when Ronald Reagan was negotiated this treaty, he was also berating the Soviets then for violating another ABM treaty. He didn't work for six months. He worked six years to bring the Soviets back into compliance, eventually succeeded. We’re using as John Bolton said, we are using these violations as an excuse to get rid of a treaty that Bolton and others in this administration never liked.

JACKSON: Do you think Putin is happy today?

CIRINCIONE: He is happy. He gets to do whatever he wants and the U.S. Takes the blame. He widened the rift in the U.S.-NATO alliance.