Sharyl Attkisson, the ex-CBS investigative reporter who has called out CBS’s liberal bias since her resignation earlier this year, continues the attack in her new book, Stonewalled: My Fight for Truth Against the Forces of Obstruction, Intimidation, and Harassment in Obama’s Washington, set to be released next Tuesday, November 4.

And just where is CBS’s comment on Attkisson’s accusations of media bias she charges in her book? The New York Post reported CBS “stuck their heads in the sand” and rather than address this potential public relations disaster and save a shred of whatever integrity they had left: 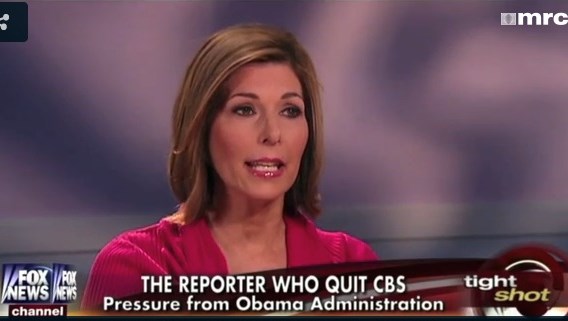 A secretary for David Rhodes, president of CBS News, immediately volleyed a Post reporter’s phone call to company spokeswoman Sonya McNail. Before the reporter could even ask a question, McNair curtly said, “We decline to comment. Thank you. Bye.”

Evening News anchor Scott Pelley’s assistant did not respond to numerous e-mails, and he didn’t return a call to his office.

Attkisson said in her book that under Pelley’s leadership at Evening News, her investigative pieces began getting killed regularly.

Former Evening News Executive Producer Patricia Shevlin, now a producer at 60 Minutes, also didn’t return a call, with the CBS operator saying the top exec was too busy to talk to The Post.

In fact, there doesn’t seem to be any comment from CBS about Attkisson since she left the network earlier this year.  When TVNewser asked about Attkisson’s departure and public comments this past April, CBS issued the following stiff-arm statement: “CBS News maintains the highest journalistic standards in what it chooses to put on the air. Those standards are applied without fear or favor.” However the spokesperson did not address Attkisson’s allegations specifically.

Public Relations 101 tells us the first thing to do in a crisis is get out in front and address the issue at hand. Ignoring Attkisson is the worst possible way for CBS to handle this situation. It only adds fuel to the flames. But CBS is obviously counting on the rest of the “mainstream” media to stay quiet on this story.

One would think a national news network such as CBS is respected enough to know better. Then again, whatever credibility they had left went right out the door with Attkisson.