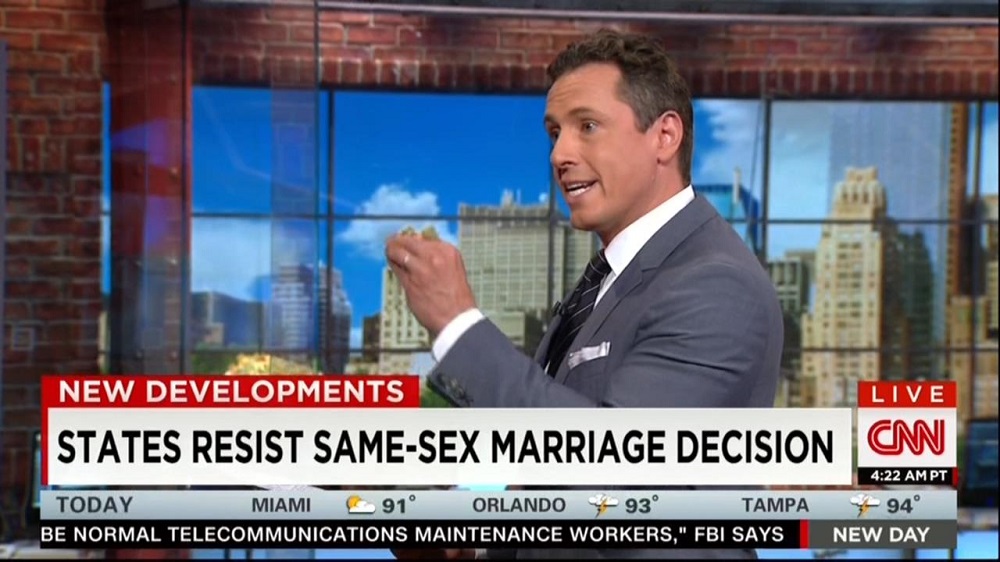 On Wednesday's New Day, CNN's Chris Cuomo again carried water for the left's social agenda as he interviewed Republican Congressman Steve King. When Rep. King contended that "no one who voted to ratify that Fourteenth Amendment gave...a thought" to the Supreme Court writing "same-sex marriage rights into that," Cuomo retorted that "you could say the same thing about race and anti-miscegenation laws." He later wondered, "How does this [decision] hurt you that it's fueling this outrage among conservatives and Christians?" [video below]

The anchor raised the subject of the Supreme Court's Friday decision on same-sex "marriage" near the end of his interview of the Iowa Republican. He pointed out how the Court "made its ruling that this is an extension of equal protection – the right exists." He asked, "You disagree – because?" Rep. King replied with his point about the creators of the Fourteenth Amendment.

Cuomo followed up with his claim that "you could say the same thing about race and anti-miscegenation laws," and added that "they were unpopular. People voted to keep blacks and whites from marrying together. And eventually, the Court found that, no, they count as people, obviously, with equal rights under the Constitution." The congressman countered that the Reconstruction Amendments had everything to do with race, which spurred an exchange about whether sexual orientation should be a protected class:

CHRIS CUOMO: You could say the same thing about race and anti-miscegenation laws. They were unpopular. People voted to keep blacks and whites from marrying together. And eventually, the Court found that, no, they count as people, obviously, with equal rights under the Constitution.

CUOMO: Well, it's a distinction to you, Congressman-

KING: You cannot compare the two things – pardon me?

KING: That's correct; that's correct...there are no immutable – nothing but immutable characteristics and constitutional-defined protection in the Civil Rights Act of 18 – or of 1964. And that is when you cross that line – you get into hate crimes. You get into self-proclaimed behaviors or inclinations. Then, that's within the person. They make that claim. It can't be independently verified, and-

CUOMO: But that's very debatable. You talk to LGBT people – they will say this is as much of their essence as any other part of them.

The CNN anchor saved his "how does this hurt you" question for last. Rep. King argued that marriage shouldn't be a federal issue, and pointed out the conflict of interest on the part of two of the Supreme Court justices. Cuomo brushed this aside by underlining that same-sex "marriage" is now popular:

KING: Chris, I have confined my debate to this thing through the Constitution and the rule of law. And I've been through this in the past. I sued Governor Vilsack in Iowa successfully on a separation of powers issue that was very similar to this. We went through this in Iowa. Now, we have it at the federal level. I'm one of the authors of Iowa's Defense of Marriage Act.

Here's how it is: the Constitution does not provide a right to marriage. Even though the Supreme Court says it does, it does not. And if the Congress decided to pass such a law that had mirrored what the Supreme Court has, I think, wrongfully ordered last Friday, it'd be found unconstitutional, because we don't have the authority in Congress to impose same-sex marriage on all the states and all the people within them. But if the states should make those decisions within their legislatures, they do have the constitutional right to pass same-sex marriage within the states, and they have a right to recognize reciprocity.

This needs to follow a process – a due process. The people in America have a right to due process, too. Five black-robed judges deciding to transform American society at their whim is the wrong thing to do – especially when two of them were conducting same-sex marriages in their spare time.

CUOMO: But often, the idea of identifying a right and what is popular are very different. Although, there may be more of a confluence here than you suggested, because the recent polls has it – like, 60/30 that people are in favor of same-sex marriage. But let's pick it up another day as we see more of the reaction. Representative King, always a pleasure to get your perspective on New Day, sir.

KING: Thank you, Chris. The Supreme Court should not be looking at polls.

CUOMO: I understand. I was making a point about its popularity. Thank you, though, sir.