CNN's Acosta Tosses Softball to Obama Over His 'Best Week Ever' 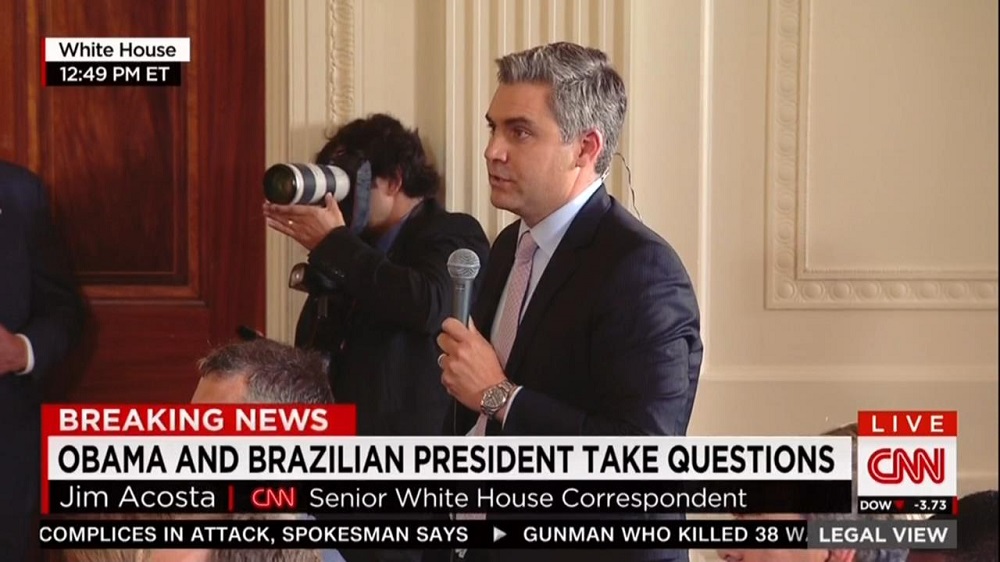 CNN's Jim Acosta quoted colleague John King at a Tuesday press conference at the White House by asking President Obama about "what some people are calling 'your best week ever.'" Acosta played up that "you had two Supreme Court decisions supportive of the Affordable Care Act and of gay rights. You also delivered a speech down in Charleston that was pretty warmly received."

The correspondent then underlined that 'it seems that you've built up some political capital for the remaining months of your presidency." He asked, "I'm curious, how you want to use it? What hard things do you want to tackle at this point?" [video below]

The President led his answer with the obvious personal answer to the question – that the real "best weeks" in his life were the weeks where he married his wife, Michelle, and where his daughters were born. The CNN correspondent gushingly replied, "Good thing you remembered those." He then spotlighted something Acosta didn't mention: Congress passing his fast-track trade legislation. He continued by cheering the Supreme Court's ObamaCare decision, before touching on his remarks at the Charleston funeral of Rev. Clementa Pinckney, who was killed days earlier in a mass shooting. Interestingly, the President didn't mention the Court's decision on same-sex "marriage."

Near the end of his extended answer (altogether, Obama spoke for ten-plus minutes answering Acosta's "multi-part" question), the chief executive outlined that he planned to use his "political capital" to press for the passage of overtime rules, infrastructure spending, reforming the criminal justice system, education, and generally making "a difference in the lives of ordinary Americans."

When the President cracked that wanted to "see if we can make next week even better," Acosta wondered if there would be "another press conference." The Democrat replied by joking, "I love press conferences. It's my press team that's always holding me back. I want to talk to you guys everyday."

The transcript of the relevant portion of Jim Acosta's question and President Obama's answer from the Tuesday press conference with Brazilian President Dilma Rousseff at the White House:

JIM ACOSTA: Thank you, Mr. President. I hope you don't mind if I ask a multi-part question. The first one being on Greece – I would be remiss if I didn't ask about the prospect of a financial crisis in Europe, and just in – in layman's terms; in language that Americans can understand, I just want to ask simply, is a financial crisis in Greece capable of bringing down the global economy?

And separately, sir, I wanted to ask you about what some people are calling 'your best week ever' last week. You had two Supreme Court decisions supportive of the Affordable Care Act and of gay rights. You also delivered a speech down in Charleston that was pretty warmly received. It seems that you've built up some political capital for the remaining months of your presidency. I'm curious, how you want to use it? What hard things do you want to tackle at this point?

OBAMA: Yeah. There was a game where I scored 27 points. (attendees laugh) That was a good week. I've had some good weeks in my life, I will tell you, and I'm blessed to have had those.

I think last week was – was gratifying, because – number one, we were able to get a package of trade legislation that I believe will serve the American people, American workers, and American businesses well going into the future. It gives us the opportunity to negotiate high standards (sic) agreements that have enforceable labor and environmental provisions. It – it was a tough fight, because – you know, there were a lot of folks in my own party who viewed this as accelerating some of the damaging or frightening trends around globalization that have taken place over the last several decades. My argument to them has consistently been that we're not going to stop globalization; we have to shape in the a way that helps people – and that these are tools that are going to help us do that. But being able to get that done was very important.

The Affordable Care Act: as I said before, the results I think speak for themselves. We have the lowest uninsured rate that we have since we started keeping records. It's worked better; cost less than even supporters anticipated; and if we can get some governors that have been holding out and resisting expanding Medicaid – primarily for political reasons – to think about what they can do for their citizens who don't health insurance, but could get it very easily if state governments acted – then we could see even more improvement over time.

And my remarks at Charleston were heartfelt. It wasn't a celebration. It was, I think, a reflection on the – the consistent challenge of race in this country, and how we can find a path towards a better way. And I was gratified to see – not only the incredible response of the families who have been affected by this tragedy – but by the response of people, like [South Carolina] Governor [Nikki] Haley, in how they viewed the issue of the Confederate flag. As I said on Friday, I think it doesn't solve all our problems, but what it does is signify a sense of empathy and recognition that, I think, is always the start of progress.

So, in many ways, last week was simply a culmination of a lot of work that we've been doing since I came into office. How am I going to spend whatever political capital that I've built up? You know, the list is long, and my instructions to my team, and my instructions to myself, have always been this we are going to squeeze every last ounce of – of progress that we can make when I have a privilege of – as long as I have the privilege of holding this office.

We announced overtime rules that I'm going to be talking about more this week. That's going to give a raise to five million people, potentially, in this country who really deserve it. I want to see if we can get bipartisan work done with Congress around rebuilding our infrastructure. Brazil just talked about their rebuilding of highways and roads and ports and bridges. You know what? We got the same work to do, and we need to put people back to work there.

I am really interested in the possibilities – the prospect of bipartisan legislation around the criminal justice system – something that, I think, directly speaks to some of the themes I mentioned on Friday, and we've seen some – some really interesting leadership from some unlikely Republican legislators – very sincerely concerned about making progress there. I want to keep on making progress on job training, and making sure that the idea of two years of free community college starts taking root.

And the list is long, and what we're going do is just keep on hammering away at all the issues that I think are going to have an impact on the American people. Some of them will be left undone, but we're going to try to make progress on every single one of them. And I've always said in – you know, one of the things I've learned in this presidency, is that there are going to be ups, and there are going to be downs. But as long as my focus, and my team's focus is on what is going to make a difference in the lives of ordinary Americans. Are we going give them more opportunity if – so that if they work hard, they can get ahead? Are we going to make this a more inclusive economy; a more inclusive society; a more fair, just society? If that's our North Star, and we keep on tacking in that direction, we're going to make progress. And I feel – I feel pretty excited about it. So, I might see if we can make next week even better. (attendees laugh)