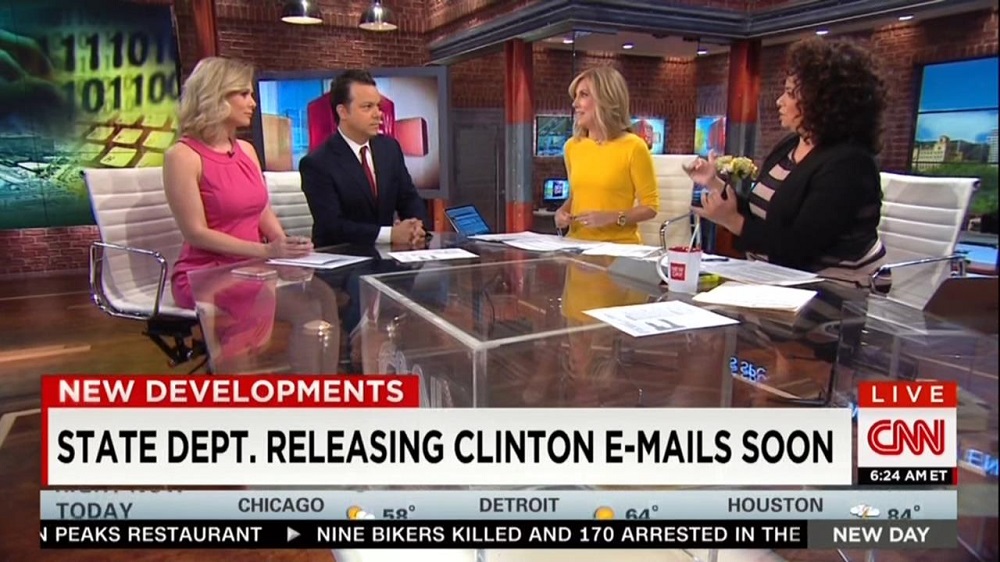 Friday's New Day on CNN played up that the Hillary Clinton e-mails revealed by the New York Times "dispute the narrative that has been around for two years that she was trying to cover something up" about the 2012 terrorist attacks in Benghazi, as Alisyn Camerota put it. The CNN anchor also wondered, "Isn't this the opposite of what the GOP has been saying about her – that she...tried to keep it secret?"

The Daily Beast's John Avlon replied asserting that "this is the problem with conspiracy theories...they run into conflict with human beings basically trying to do their best in real time." Avlon's wife, liberal Republican activist Margaret Hoover, contended that these e-mails "helps for, sort of, any election," and added that "it complicates her relationship with the Obama administration – because then, Susan Rice went on TV seven days later, and said this was about a video." Camerota replied, "From this e-mail, it seems like she knew the truth, and she didn't want to say the untruth."

Camerota led into the Avlon/Hoover segment by detailing the New York Times story:

ALISYN CAMEROTA: Okay. So finally, we're going to see what's in these long-disputed e-mails. And one of the things that is interesting that has come out already in the New York Times is that she had a whole series of communications all the time with Sid Blumenthal, who is one of her top advisers. And the day after the Benghazi attacks – you know Republicans have been waiting to see what she knew about Benghazi.

Here is a clue. Let me read to you what the exchange was with Sid Blumenthal: 'Mr. Blumenthal sent Mrs. Clinton a more thorough account of what had occurred' the day after. 'Citing sensitive sources in Libya, the memo provided extensive detail about the episode, saying that the siege had been set off by members of Ansar al-Shariah, the Libyan terrorist group. Those militants had ties to al Qaeda, had planned the attacks for a month.' 'We should get this around ASAP,' Mrs. Clinton said in an e-mail to one of her aides – Mr. Sullivan. 'Will do,' he responded.

The former Fox News journalist continued with her "isn't this the opposite of what the GOP has been saying about her" question. Avlon and Hoover replied with their pro-Clinton answers, with Hoover pointing out the Susan Rice issue:

CAMEROTA: So she knew, and she said that they should – she knew it was terrorists, not just a demonstration. And she suggests we should let people know about this. I mean, isn't this the opposite of what the GOP has been saying about her? That she kept it – tried to keep it secret?

AVLON: Yeah. I mean, this is the problem with conspiracy theories. They often run into – they run into conflict with human beings basically trying to do their best in real time. And what you saw, actually, from the e-mails we now see – and there will be more released later today – is that Blumenthal originally corroborated the whole idea that this was a video.

AVLON: Correct – and then, all of a sudden, the fog of war recedes, and you start to get actionable intelligence. And part of the complication with Blumenthal is his relationships with interests in Libya at the time. But – so you start to see, in real time, a sense that they're figuring this out, and that – and that they were trying to get the story right piece by piece – like human beings do.

CAMEROTA: Right. Doesn't this dispute the narrative that has been around for two years that she was trying to cover something up?

HOOVER: Well, what it does is it helps her for, sort of, any election. I mean, the Republican accusation and the problem – it complicates her relationship with the Obama administration –  because then, Susan Rice went on TV seven days later, and said this was about a video – this wasn't a terrorist attack – when other members of the administration wouldn't go on TV and say that. Maybe there's a reason she didn't go on TV and say that. I mean, all of us are wondering, why is Susan Rice on television saying this? Where is the secretary of state? Well, maybe they didn't want to. Maybe they knew – wouldn't want to take those talking points-

CAMEROTA: It seems that way! From this e-mail, it seems like she knew the truth, and she didn't want to say the untruth.

AVLON: It does increase scrutiny on Susan Rice's comments, because they come so many days after the fact.

What all three leave out is the fact that Susan Rice, as the then-ambassador to the United Nations, worked for Mrs. Clinton at the State Department.

Co-anchor Michaela Pereira then pointed out the issue of whether classified material might have been shared on the former first lady's private e-mail server. Avlon and Hoover did acknowledge that the Clintons had a "perception" and a "judgement" issue over the e-mail server:

MICHAELA PEREIRA: To the overall issue of the e-mails, as we have said, some of them are going to – have already been leaked. More are expected to be released today. It's interesting that some of these e-mails – they're called 'SBU' – sensitive but unclassified.' John, is that an issue to you? Because that's kind of a gray area. Even when you think about the kind of e-mails that we all send – I e-mail you and Margaret for an invitation to dinner, we might actually talk about work. There's bleed-over.

AVLON: There is bleed-over – and it's all the more reason to actually try to do things on consistent servers, as opposed to private servers. The issue doesn't appear to be one of legality or even ethics. It's one of judgment. And for the Clintons especially, they know politics is perception. There's no way they could have set up that separate server and not understood that, at the very least, it would look bad. So while it appears that no classified information was passed – that's a relief because these probably weren't secure servers at the end of the day – it is – it is still a question of judgment.

PEREIRA: Many are saying that this was about control for her-

HOOVER: She did, too, apparently.

PEREIRA: She did, too. But this has been about control, and that's one of the issues a lot of people have with this.

By contrast, the two guests did see a larger problem with the latest revelation regarding the Clinton Foundation [see video below]:

CAMEROTA: Let's talk about another perception issue, and that is what's happening this morning in the Washington Post with the Clinton Foundation. They're announcing that there are yet another $26 million worth of revenue from foreign – or speeches-

AVLON: Who among us has not misplaced- (Hoover laughs)

CAMEROTA: That they – that the Clintons didn't disclose. So how big of a deal is this?

PEREIRA: Love to have it misplaced-

HOOVER: I mean, Hillary Clinton – when she testified before the Senate – when she was confirmed before the Senate in 2009 – said that every single dollar of funding that comes into the Clinton Foundation – regardless of whether it needs to be disclosed or not – will be disclosed just to avoid the appearance of impropriety. They wanted to get the optics right. So that's what they said. What they have done consistently shows that it's the opposite. The first time was with the Canadian affiliate of the – of the Clinton Foundation, which had over $30 million undocumented. The second time was the Boston Clinton Health Initiative that had more than $10 million that was undocumented. Now, you have these $26 million of revenues not donations.

It's like – three times the pattern of something. And you wonder why there is this inconsistency of being able to be fully transparent, when that's what they have said all along, is that we aspire for full transparency.

AVLON: Well, it's easy to say; it's harder to do, obviously. And in this case – you know, you can understand from an accounting perspective why this isn't a donation, literally. It is – it's revenue – speeches on behalf of the foundation. But given the sensitivity of the secretary of state; given an upcoming presidential campaign; you've got to make a consistent effort to go above and beyond the call of duty, and they did not in this case. Again, politics of perception – they should know better.

Later in the program, Camerota, Pereira, and fellow CNN host Michael Smerconish also discussed the Clinton Foundation revelation. Smerconish asserted that it was a "serious issue." Camerota also wondered if the Clinton acted in an "unseemly" manner:

PEREIRA: Let's talk to – about another issue that is going to be – facing the Clintons – certainly, Hillary – we are learning from the Washington Post that there was $26 million of undisclosed revenue – not donations; they're citing it as revenue – from speaking engagements. Problematic – the fact that it was undisclosed? Is this, sort of, par for the course for a politician doing speaking- 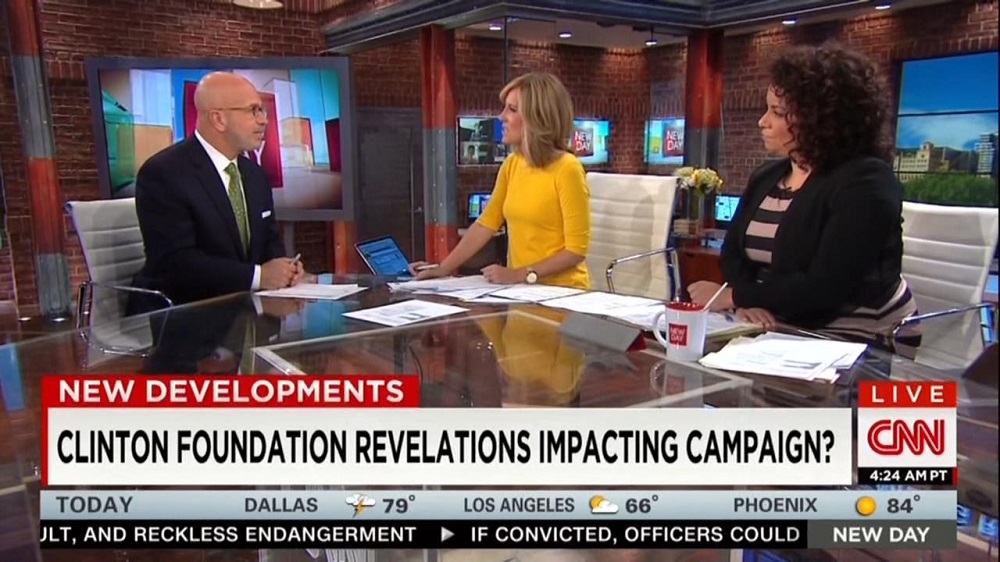 PEREIRA: Okay. How so?

SMERCONISH: I think – well, first of all, these are each complicated. It's very difficult for me –  no matter how closely I pay attention to each of them – to try and condense them into twenty-second soundbites. And I say that, because I think it speaks to whether they resonate in the political cycle. Watergate resonated because it was a burglary – nobody wants their home to be broken into....Whitewater – what was that all about? Give me a couple minutes, and I'll try and lay it out for you.

I think that this is a serious issue, because Peter Schweizer has this new book – it's called 'Clinton Cash.' The theory of the book is that foreigners, who are precluded from making campaign donations to domestic candidates here – nevertheless tried to curry favor with the Clintons by engaging him to speak, or making contributions to the foundation; and therefore, got close to the Clintons. This furthers that narrative-

PEREIRA: Under the guise of a speaking engagement that-

SMERCONISH: Correct....for big bucks, Michaela – big, big dollars being paid – and not by business interests in the U.K. or Germany or France – but a lot of rogue nations, for a lack of a better descriptor – business people involved in transactions in those areas. So again, will you find a quid pro quo – evidence of it? Will you find a smoking gun, where Bill gave this speech; and consequently, this approval was given? You won't find something that clean. But there are a lot inferences here that I think don't bode well for either of them.

CAMEROTA: Does it have to be a quid pro quo, or can it just be unseemly – just unseemly that they're not disclosing it, and that there's so much money and that they kept gobbling up these millions of dollars – and obviously, not wanting to let people know?

SMERCONISH: I think that for many – yes, that is enough, because it's a continuation of this cloud that, in the eyes of some, seems to always follow them. A different interpretation is to say the only thing new about this is that there's a foreign entity and the donations were given to the foundation. This is the way it is in politics – usually, the money is given to a super PAC.

PEREIRA: I was just thinking that these things are going to follow her around for a while, and she's going to have to address them. And we know she's not been real eager to answer questions from folks like us. So, we'll have to see what happens.