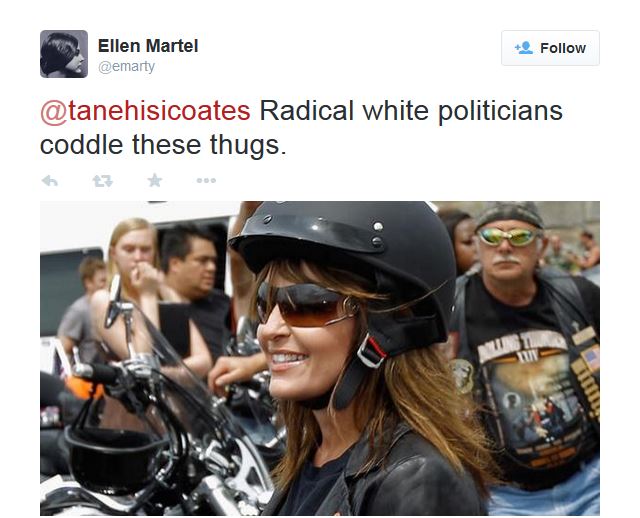 On Tuesday, the Washington Post's Janell Ross spotlighted a Twitter post attacking Sarah Palin, as she forwarded the left's narrative about a supposed double standard between coverage of black violence and the recent shootings involving biker gangs in Waco, Texas. The Tweet included a photo of Palin at the 2011 Rolling Thunder event in Washington, DC, which honors America's fallen members of the military, and bemoaned how "radical white politicians coddle these thugs." The Washington Post's Twitter account included the picture when they promoted Ross's item.

The writer led her article, "White bikers, black thugs: Why Texas looked to relax gun laws after biker shootout," by pointing out how the Texas state legislature "debated a bill that would expand the rights of licensed gun owners to openly carry weapons in public," mere hours after the shootings in Waco. After briefly acknowledging that "this wasn't the first time the Texas state Senate took up the matter of expanded gun rights," she played up that "even in Texas, debating the merits of a bill that relaxes gun laws one day after nine people were killed in a shootout...seems oddly timed. It's tailor-made for a 'Daily Show' segment full of knowing jokes about America's relationship with guns and the country's singularly elevated gun death rate among wealthy nations."

Ross, who previously worked for National Journal, continued by asserting that "what happened in the Texas state Senate on Monday was also, in many ways, just an example of the vastly different ways in which crimes committed by white individuals – even when those individuals are members of organized criminal organizations and happen on a spectacular scale – are routinely if not always viewed as the questionable, discrete acts of independent actors." She added, "Consider the headlines, cable news show line-ups and editorials that would have followed if the weekend shootout happened at a Waco hip-hop show or club."

The Washington Post reporter then referenced the Tweet attacking Sarah Palin, as she highlighted left-wing Twitter users who zeroed in on the apparent race factor in the media coverage of the Waco mass shooting. She also featured a Twitter post from leftist commentator (and regular MSNBC guest) John Fugelsang:

Over in a corner of Twitter that most of white America doesn't visit (because apparently our social media networks are about as segregated as they are in real life), snark took over. Many tweeted ironically about the corrosive influence of biker culture on weekend warriors and the imperative need for white leaders to denounce the broader scourge of "white on white crime" in front of hashtags like, "#stuffthemedianeversays." Pictures of Sarah Palin and in leather biker gear popped up along below tweets about "radical white politicians," who "coddle," and commune with, "thugs." The subtext of all of it was clear: This is what the world's paid and volunteer shouter corps say when the tragedies involve black people, not white.

The only problem with the left's narrative: the biker gangs who were involved in the bloodbath are not exclusively white. On Tuesday, Time magazine released a composite image of many of the mugshots of the suspects arrested in the shootings, and several of the suspects are African American or Hispanic.

It should also be pointed out that Ross and the Washington Post (not to leave out the original Twitter poster) are unfairly grouping the thousands of participants of the annual Rolling Thunder event – many, if not most of whom are not members of biker gangs – with the perpetrators of the Sunday violence in Texas.

The Washington Post reporter ended her article with a point about supposed white privilege:

The tweets mentioned above, written by people tired of the litany of think pieces and cable TV shout sessions about black America's allegedly dysfunctional culture and the supposed threat to civilization posed by sagging pants, spoke to something real. White Americans – whether members of biker gangs, declared criminal organizations or not– enjoy the constant luxury of being viewed as precisely what they are: individuals capable of all manner of accomplishment and bad behavior at any given moment in time.