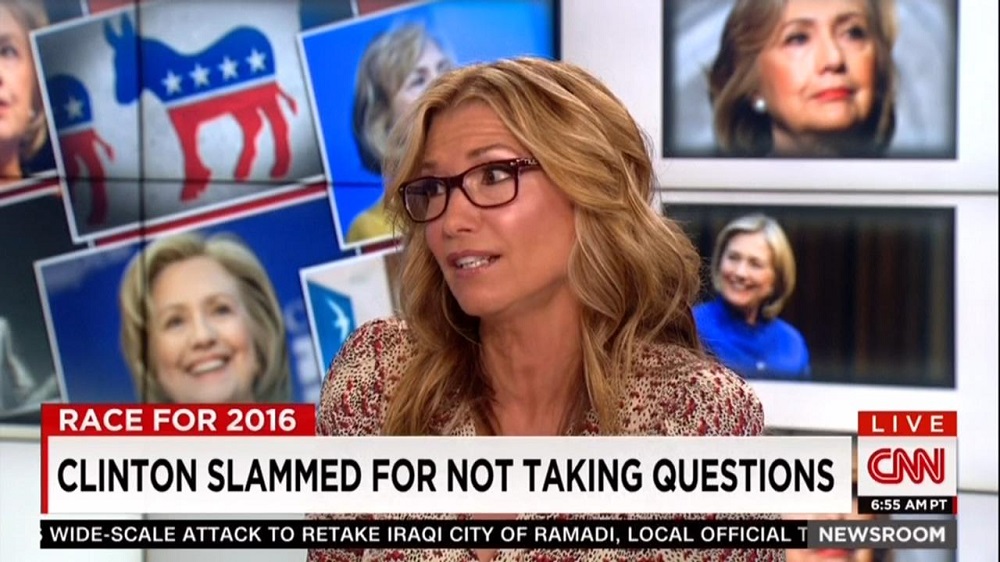 On Friday's CNN Newsroom, liberal anchor Carol Costello actually didn't buy the spin of a Hillary Clinton supporter on her skirting of questions from the press. When Democratic strategist Robert Zimmerman did his best to shield Mrs. Clinton, Costello interjected, "I want our political candidates to take tough questions." She later underlined that "she's not answering questions! About her foundation – there are really important issues out there that she needs to address!" Costello later complimented Jeb Bush: "At least he's out there answering hard questions!" [video below]

ROBERT ZIMMERMAN, DEMOCRATIC STRATEGIST: Because she was meeting with her campaign supporters – and it was a campaign gathering for her supporters. But the reality is, Hillary Clinton has been in the first 30 days of her candidacy. Her first 30 days, she's given major public policy speeches about criminal justice reform – immigration reform. She's been meeting with actual voters – not only answering their questions, but actually listening to them about their concerns. I don't think that threatens democracy.

Costello laughed at this response and continued with her "I want our political candidates to take tough questions" statement. This sparked a whole exchange, where Zimmerman kept up his defense, and Kohn pointed out Bush's recent stumbles over the Iraq War issue. The CNN anchor interjected with her compliment of the former Florida governor:

CAROL COSTELLO: (laughs) Come on, Robert! I'm a reporter. I want our political candidates to – to take tough questions – right?

COSTELLO: Even Sally's rolling her eyes over there.

ZIMMERMAN: Of course, she is!

SALLY KOHN, COLUMNIST, THE DAILY BEAST: Well, I mean – of course, I'm rolling my eyes. I – I love rolling my eyes. (Zimmerman laughs) But there are – there are a bazillion months left to this campaign. So, part of it is – is, like, people like us – with all due respect, Carol – who really want something to talk about – so we hope she'll answer some questions, so that we can have something to parse – then again, look – it didn't work out well for Jeb Bush. I mean, at this point, he should stop answering questions-

COSTELLO: But at least he's out there answering hard questions!

ZIMMERMAN: But there's a big – there's a big difference. Jeb Bush gave four different answers to the same question, and that was his – that was his problem. Hillary Clinton is actually answering questions. She's talking to voters. It will be-

COSTELLO: She's not answering questions! About her foundation – there are really important issues out there that she needs to address!

COSTELLO: Unchallenged – right? It's easy to put out written statements like-

ZIMMERMAN: Actually, no! It's more important to put out factual corrections, and that's what her campaign did. You got 21 months, Carol. Come on!

Kohn then added her own defense of Mrs. Clinton:

KOHN: ...I'm not one to defend the Hillary Clinton campaign – but given the reality of both the length of this campaign, and the giant target sign she has painted on her back – both because of who she is, and because of her front-runner status – if she were to go out and – you know, take a swing at every Wiffle ball that was being thrown at her from the right and from the press and from everyone else, then she wouldn't have a chance to actually proactively put out her vision – connect with voters. That really is what campaigns – please! – should be about. And so-

ZIMMERMAN: And there's something to be said for speaking to issues and connecting with voters. I mean, the first-

KOHN: Wait a second! Elections are about issues?

ZIMMERMAN: We can start that trend here. Absolutely!

Near the end of the segment, Costello revisited the Jeb Bush/Iraq War issue. True to form, Zimmerman kept up his defense of the former secretary of state, after Kohn hit Mrs. Clinton from the left for her vote on the conflict:

COSTELLO: Okay. So something else struck me – you know, Dana Bash was reporting on Jeb Bush, and he's having a difficult time saying really bad stuff about his family members. I would suppose that Hillary Clinton would have the same problem, maybe, in criticizing her husband.

KOHN: ...Look, you know, I will say this: it is – it is interesting that there is this – and I will admit I've been guilty of doing it, too. It's very sexist to, sort of say – oh, well, let's compare Hillary – or, sort of, in any way, use her husband as a yardstick to measure her against. In the same sense, I do think it's problematic. I would be a hypocrite if I didn't say it's also problematic to say, oh, just because Jeb Bush is George Bush's brother, therefore, we lump them together-

KOHN: Right – but he hasn't done it. He's stepping in it-

COSTELLO: It's up to Hillary Clinton to distinguish herself from-

ZIMMERMAN: We're asking Jeb Bush to comment on the most tragic foreign policy decision made this century. And the reality is – not just will he not take a position – a clear position – but his advisers are his brothers' top military – domestic – foreign policy advisers. And Jeb Bush said himself, his top Middle East adviser would be his brother, George. So it tells me that, ultimately, he's very much in sync with where his brother's foreign policy agenda is.

COSTELLO: I don't know if that's fair to say-

KOHN: But again, I think it's – that goes back to – that, to me, feels like it's a snare, and I'd rather talk about actual policy – his stand-alone policy – just like I'd rather talk about Hillary's. And I think the problem – both of them – both of them, back then, support the war in Iraq. And I think – forget what we know in hindsight, and forget his muddled answers – back then, it was a problematic vote, and I think they both have to reckon with that....But I agree: the fact that his foreign policy advisers are all the same as George Bush's is like – what, are you going to repeat the mistakes again?

ZIMMERMAN: Hillary has already reckoned with that. She's acknowledged it was a mistaken vote, and she's certainly worked hard to correct that error. But the reality here, in terms of our foreign policy, is if you want to know what their agenda is going to be – and their policy – look at their advisers. Jeb's are George's advisers – tells you something.