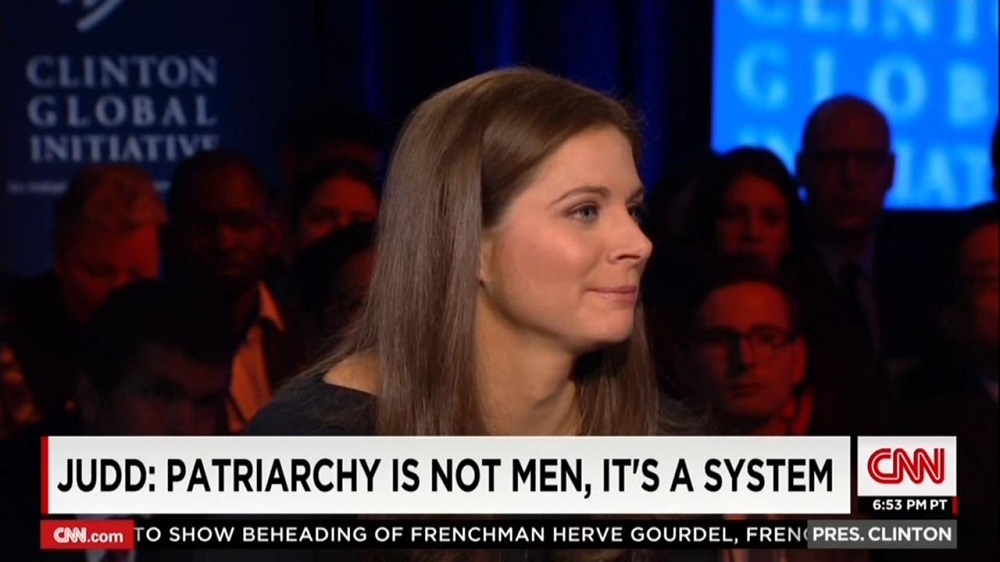 On Wednesday, CNN's Erin Burnett kissed up to left-wing actress Ashley Judd by promoting her radical feminist take on society. Burnett asserted that "one thing the education system still teaches is a patriarchal view of the world," and quoted from an April 2012 piece that Judd wrote for The Daily Beast: "Patriarchy is not men. Patriarchy is a system in which both men and women participate. It is never more danger(ous) than when women passionately deny that they themselves are engaging in it." [MP3 audio available here; video below]

The anchor, who brought on Judd and other high-profile guests for an hour-long town hall special (ironically, the featured guest was notorious philanderer Bill Clinton), continued by singing her guest's praises and connecting the quote to ongoing scandal surrounding NFL player Ray Rice:

ERIN BURNETT: Ashley, this is something you have taken on passionately and with great conviction....You had me there, because that is what we're seeing. We're seeing it around the world. We're seeing it right now with the NFL, and the reaction to domestic violence right here in the United States.

Judd took Burnett's compliment very well, and replied to her reading of the quote with the usual leftist talking points about masculinity and the balance of power between men and women:

ASHLEY JUDD, ACTRESS AND ACTIVIST: ...I appreciate you teasing that out, and it's something that I discovered myself as an undergraduate – because, on the one hand, I was becoming intellectually and emotionally and spiritually empowered. On the other hand, I saw myself doing things with which I was later ashamed –  whether it was in terms of – objectifying myself. And really, the greatest objectification I ever experienced is between my own two ears.

You know, of course, girls and women needs to be educated – if they're not healthy, they don't go to school. It has to start with our definition of masculinity, and what boys and men are taught about masculinity. And a great instrument for that is the economic empowerment of girls and women, because – hey, the language might be a little crass – but when a woman becomes economically useful in her home, the dynamic of power shifts. At first, initially, there could be violence and resentment and – don't get uppity – but also, that economic viability that – increases the wellness of the family transforms interpersonal relationships, and that's ultimately how communities and nations are improved.

The CNN anchor isn't the first media personality to boost Judd's feminism. Back in April 2012, NBC's Brian Williams touted Judd's "bold, and, at times, angry essay" on his short-lived Rock Center program, shortly after it first appeared on The Daily Beast.