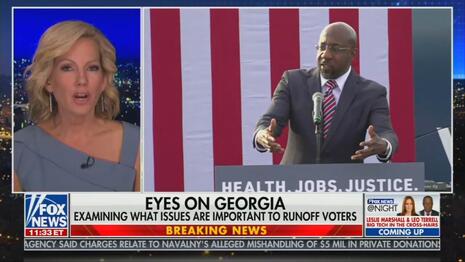 The nation's Hispanic media excel at keeping damaging news for Democrats out of the airwaves. Take for instance, the collective, deafening silence of Telemundo, Univision, Estrella TV and CNN En Español – the four Spanish-speaking networks with national newscasts – on the domestic violence charges brought against radical liberal Raphael Warnock by his former wife.

The incident, where Ouleye Ndoye accused Warnock of running over her foot with his car, took place in March and was recorded on a law enforcement bodycam released on December 23rd. For all you'd know from watching Hispanic media, NOTHING EVER HAPPENED.

Warnock, one of two Democrats in Georgia's Senate runoff elections on January 5 that will determine which party controls the Senate, denies the charges. The same media that covers for him, however, went all-out with news report after news report, practically accusing Justice Brett Kavanaugh of unfounded sexual abuse allegations, fueled by the liberals, and the (now) nowhere-to-be-seen MeToo movement.

The Latino nets do however, find time to report innocuous fillers about conservatives, like a call for the use of a Twitter hashtag to bully Mitch McConnel, or to show elated anchors joyfully celebrate the legalization of abortion up until the fourteenth week of gestation in Argentina.