After a week's worth of scrambling, the establishment media finally found a face around which to frame their anti-Trump political coverage of the aftermath of Hurricane Maria's devastating impact upon the island of Puerto Rico. That face, of course, is San Juan Mayor Carmen Yulín Cruz. But as always, one must be watchful for what is missing from a report - and this sudden lionization of Mayor Cruz is no exception.

Puerto Rico Governor Ricardo Rosselló, preoccupied with such things as governing and overseeing rescue and recovery efforts, has refused to let the media bait him into a public spat with President Trump over the pace or progress of the recovery. But the anti-Trump narrative demanded a face, and into that void stepped Mayor Cruz, who practically accused the federal government of deliberately holding back aid in order to kill islanders.

SAN JUAN MAYOR CARMEN YULIN CRUZ: and if they want to let us die of hunger and of thirst, then say it...that's the only reason one can think of for there to be almost 3000 containers full of things we need.

The media was initially distracted from covering the devastation in Puerto Rico immediately after Hurricane María made landfall on Puerto Rico,  focusing instead on President Trump's respective Twitter beefs with North Korean leader Kim Jong-Un, the NFL in general and anthem-kneelers specifically. 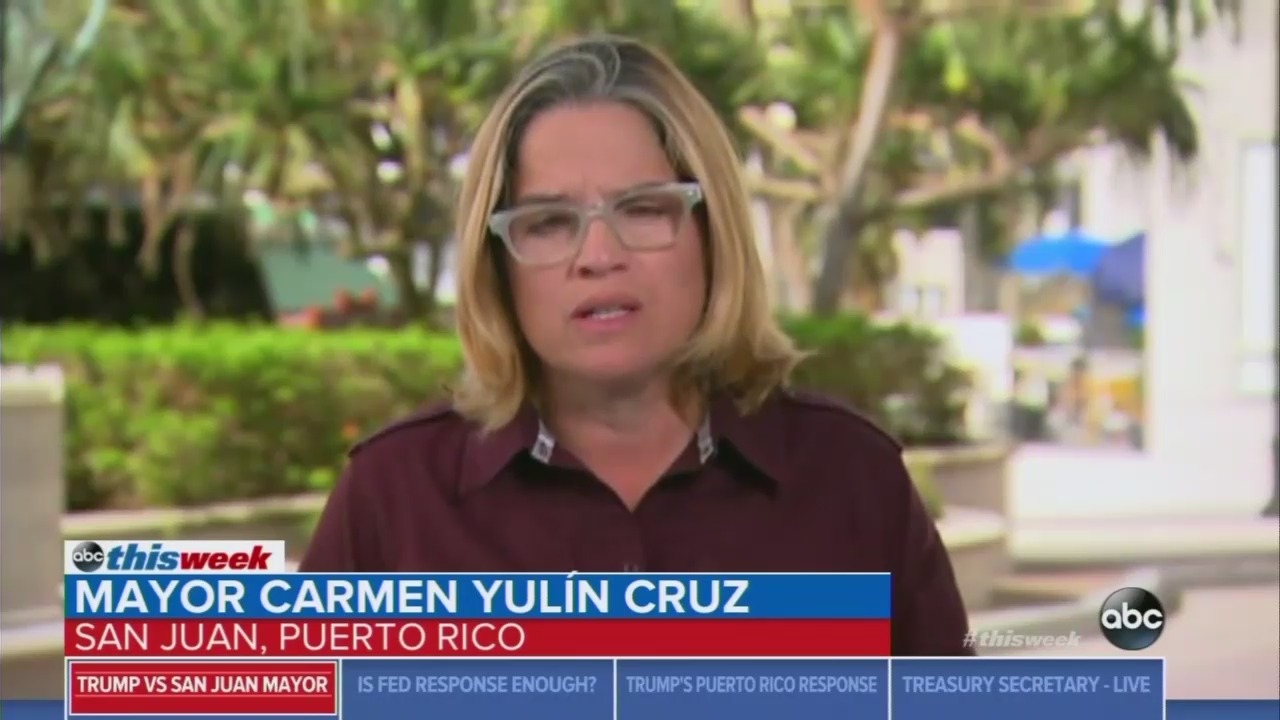 It wasn't until Sunday (four days after landfall) that the Acela media seemed interested in covering the aftermath of the hellstorm - and only seemed to do so after the emergence of an anti-Trump narrative, namely, the logistical issues in getting supplies from the Port of San Juan to those in need and (again) his tweets. (The exception, of course, are those tireless correspondents on the ground that showcase both the difficult challenges of the ongoing recovery, as well as the inherent nobility of the Puerto Rican people as they endure the most devastating natural disaster the island has ever faced. Of these, CBS’s David Begnaud - who is fast attaining iconic status among the Puerto Rican community within the continental United States - has done the most outstanding work.)

Those who know little or nothing about Mayor Cruz have no choice but to rely on glowing profiles from such outlets as ABC and the Washington Post, to name a few. In the process, they have been deprived of being informed of Mayor Cruz's long record of leftist radicalism.

The Washington Post piece, in particular, plays a bit of misdirection as to Mayor Cruz’s political affiliations. Cruz’s endorsement was widely sought after in the 2016 Democratic presidential primary on the island, and the Mayor seemed to be leaning towards Hillary Clinton. However, Cruz decided to abstain from supporting Clinton, citing her less-than-enthusiastic support for the commutation of convicted FALN terrorist Oscar López Rivera, and her (then) silence over the joint financial control board imposed on Puerto Rico’s government pursuant to the PROMESA congressional oversight law.

Cruz's non-endorsement was then splashed on the Daily Kos, and Cruz has subsequently been prominently endorsed by Bernie Sanders’ Our Revolution organization, which belies any suggestions of non-involvement with stateside politicians. Socialists of a feather tend to flock together.

Speaking of socialists, there is also the matter of Cruz’s involvement in the effort to secure the release of convicted FALN terrorist Oscar López Rivera (who, incidentally, isn’t around to assist with Puerto Rico’s recovery after maiming people in the island’s name. But I digress.)

It is widely known that Cruz was a prominent part of that unholy separatist trinity working on López Rivera’s behalf, along with Congressman Luis Gutiérrez and New York City Council Speaker Melissa Mark-Viverito (a good primer here, from the Daily Caller’s Kerry Picket).

However, it is little known that Cruz expended precious city funds on a 24-hour police security detail for López Rivera upon his commutation and subsequent arrival in San Juan. Cruz also made a direct allocation of San Juan municipal funds in support of the 2017 May Day protest, which resulted in multiple arrests and hundreds of thousands of dollars in property damage in the very center of San Juan’s Hato Rey financial district.

In both instances, San Juan city police were held back from the protests. Some would say that Yulín Cruz, like Baltimore Mayor Stephanie Rawlings-Blake, afforded these Antifa-like thugs some “space to destroy.”

Puerto Ricans are well aware of the San Juan Mayor’s hijinks and propensity for mayhem, and overwhelmingly disapprove of these. In fact, a June 2017 poll from El Nuevo Día, Puerto Rico’s leading newspaper, shows that as of the summer of 2017 only 24% of Puerto Ricans approved her performance as Mayor (46% disapproved) and 58% considered her role in the violent May Day protest as “irresponsible.”

Once again, the liberal media has vetted its champion incredibly poorly. And so it is that the Puerto Rican face of the #Resistance is a radical leftist separatist who championed a terrorist and is largely loathed by her own constituents.