Univision's late night news anchor, Enrique Acevedo, has temporarily relocated to Washington, D.C. to help the network cover the first 100 days of the Trump Administration. But coverage so far appears to be little more than "Resistance" counterprogramming, including Acevedo's demand that Twitter cancel Trump's account.

The anchor's call for Trump's expulsion from Twitter is par for the course for Acevedo, who once suggested that "Climate change deniers have no place in our government." This penchant for suppression of opposing political viewpoints also goes so far as Acevedo now taking it upon himself to attempt to become CNN Brooke Baldwin's booker, summarily dismissing well-known Trump supporter Marco Gutiérrez as "Taco Truck Guy".  Here's a screengrab of his call for Trump's deletion from Twitter...

...and of his call for CNN to yank Latinos for Trump President Marco Gutiérrez: 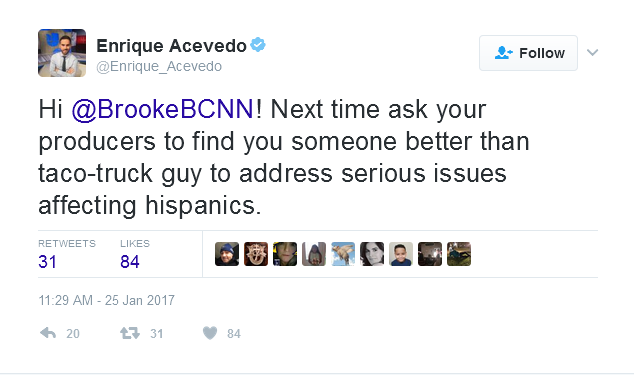 Acevedo's D.C.-based news coverage has been just as exclusionary and one-sided. With the exception of Mexican Foreign Affairs Minister Luis Videgaray (who came on in order to answer questions about the now-infamous phone call between Presidents Trump and Peña Nieto), the subjects of Acevedo's politician interviews have been one Democratic member of Congress after another.

The pattern that has emerged from these reports is to elicit sweeping denunciations of Trump's immigration policy (whether or not they are factual) without any Republican commentary or response in kind, much less any critical questioning. Here's a snippet from his interview of Senate Minority Leader Chuck Schumer (D-NY)...

SEN. CHUCK SCHUMER (D-NY): It seems like Donald Trump wants to depict all immigrants as terrorists and criminals, when in reality they are the country's hope and future.

Sen. Tim Kaine (D-VA): The President is using words and taking actions of hate against the Latino community and against immigrants.

Acevedo's capped his first week in Washington by interviewing House Minority Leader Nancy Pelosi (D-CA), eliciting comments along the same lines. All three interviews reveal the emergence of a clear pattern - the establishment of a narrative that border enforcement is an explicitly anti-Latino or anti-immigrant act.

Actual journalism gives way to the dissemination of partisan talking points and the sowing of grievance. The initial coverage of Enrique Acevedo's 100-day deployment to Washington thus gives us an early indication of what we can expect from Univision during the next four years.