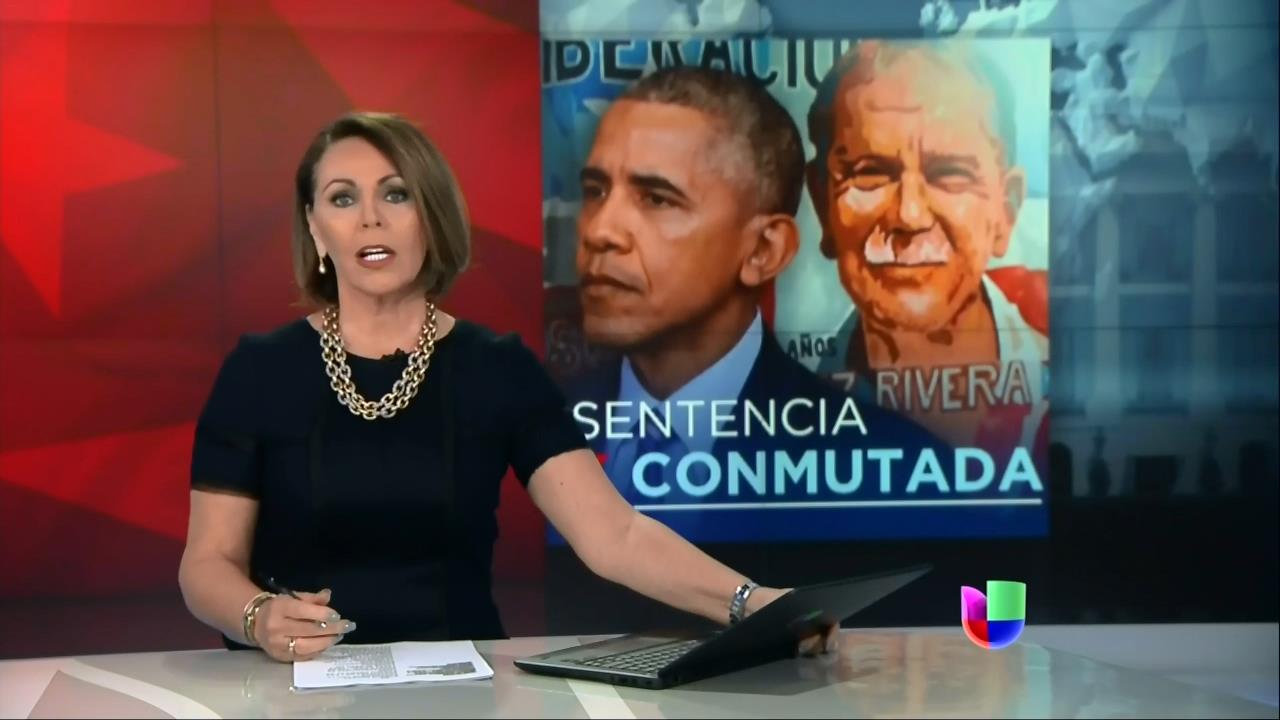 Univision's report on President Barack Obama's commutation of the prison sentence of convicted terrorist Oscar Rivera López is an astounding case study in fake news. The story, which went entirely unreported on the evening ABC, CBS and NBC newscasts and was accorded a quick blurb at Telemundo, took top billing on Univision newscast.

One of the fascinating parts of this story is the anchor lead-in. Most of the time, the anchor sows bias into a straight-up report from one of their field correspondents. However, in this instance such was not the case. María Elena Salinas was factual, accurate, and neutral in her lead-in, describing López-Rivera as "leader of a clandestine group that sought the independence of Puerto Rico."

But then Lourdes Del Río took over, and with that came the fake news portion of the report.

Recall how I previously described the broader effort effort to free López Rivera:

Del Río's report was a case study in fake news. The report opens with a dry account of López Rivera's charges and sentence, with no historic background on the FALN or their multiple crimes. The report then goes into an extended description of the "broad people's movement" that led to López Rivera's release. The "entertainment industry" portion of this story was presented by Ricky Martin, who said:

"...this goes beyond being Puerto Rican or not. This is a...this should be an international union. All who respect human rights must be involved in this movement...for the release of Oscar López."

The report included no one who spoke for the human rights of the victims of the bombing at Fraunces Tavern or the Sabana Seca shooting. Del Río proceeds to provide details of the Clinton clemency offered in 1999, emphasizing López Rivera's rejection due to the fact his comrades were not offered the same terms.

Del Río then notes the convicted bombmaker remains both unrepentant and defiant in his defense of the use of violence (and not the ballot box) to advance his repeatedly and overwhelmingly rejected pro-independence cause.

LOURDES DEL RIO, CORRESPONDENT, UNIVISION: Oscar López-Rivera never abandoned his independence ideal, assuring that all human beings have the right to want their country to be free and sovereign.

OSCAR LOPEZ-RIVERA, CONVICTED TERRORIST: Colonialism is a crime against humanity. That is clear. And with being colonized has the full right to struggle for its independence.

It bears noting that a photo of the aftermath of the Fraunces bombing ran, along with propaganda images in favor of López Rivera's release, as Del Río coldly delivered the terrorism apologia. Del Río then closed her report with this grotesque mischaracterization of the FALN, what they did, and of López Rivera's role within the organization (italics mine):

"Oscar López belonged to the Armed Forces of Liberation (the FALN) a group that claimed responsibility for explosions in the United States in the '70s and the '80s, but he was never charged for any of these acts. Back to you, María Elena."

The report is followed by reaction from López Rivera's family. There was no reaction from those who opposed the commutation, or of any of the relatives of those who were victimized by the FALN's reign of terror - in fact, the only opposing view aired during the interview was a screengrab of this post by Ron Kolb, titled "The Unrepentant Terrorist".

This story sits at the very confluence of terrorist apologia and fake news- a shameful new low, even by Univision's standards.