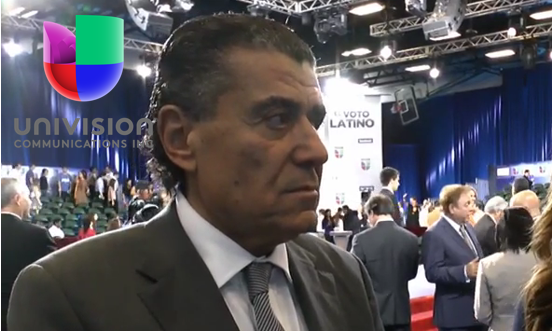 The apparent relationship between Univision Executive Chairman Haim Saban, its news division, and the Clinton campaign were always under suspicion of collusion. The recent Wikileaks drop renders any further questions moot and unneccesary.

MRC Latino has long documented the apparent collusion between Univision's news division and the Clinton campaign (see here, here, and here). The basic point is that under Saban, Univision has conducted itself as a liberal special-interest group whose survival and continued influence depends on the election of Democrats to the presidency and to Congressional majorities. But there was never a smoking gun, until now.

In all fairness, I believe Haim Saban when he says that he doesn't directly dictate coverage to Univision's news division. He doesn't have to.

Chief News/Entertainment/Digital Officer Isaac Lee and President of News Daniel Coronell have stacked the division with activist-journalists á la Jorge Ramos. They will instinctively cover stories and issues from a certain perspective. All that Saban needs to do, then, is to make sure that the dog whistle gets blown. He influences coverage indirectly.

This is the thrust of this e-mail, subject line "Hi", the coverage of which conveniently fades to away from the spotlight. Open the e-mail in a separate tab, and let's walk through this together.

Scroll all the way to the bottom. On July 2nd, 2015, Saban requests a call from either John Podesta (Clinton campaign chair) or Robby Mook (Clinton campaign manager).  Mook defers to Podesta. After the call, Podesta states that:

Haim thinks we are under reacting to Trump/Hispanics. Thinks we can get something by standing up for Latinos or attacking R's for not condemning

Adding Amanda and Xotchil. Haim is right - we should be jamming this all the time. A and X - can we think about what else we should do? Issue a broader challenge? Do something tied to Fourth of July were we declared all equal? Get CHC to do a letter?

I agree! +Lorella (Praeli- Clinton Latino Outreach Director) Call for an apology? Make univision her first Spanish interview for taking a stand. Put out a statement. Thank you letter to univision and Macy's.

All Saban had to do was nudge the campaign into performing in a manner which would be cast in the most favorable light over at Univision's news division. Needless to say, that strategy has worked like a charm. According to Pew Hispanic, Clinton has an eye-popping 78-6 advantage over Donald Trump among Spanish-dominant voters nationwide - the very viewers that constitute Univision's audience and lifeblood. Among English-dominant Hispanic voters, however (a segment less likely to be manipulated by Univision) the survey shows Trump's support more than four times higher, standing at 25%.

The late Mexican megastar Juan Gabriel was known for a pithy rule when it came to questioning what is self-evident: "lo que se ve no se pregunta"- which best translates to "don't ask about what you (plainly) see". With regard to the relationship between Univision and the Clinton campaign, we plainly see what we always saw.

No further questions are necessary.