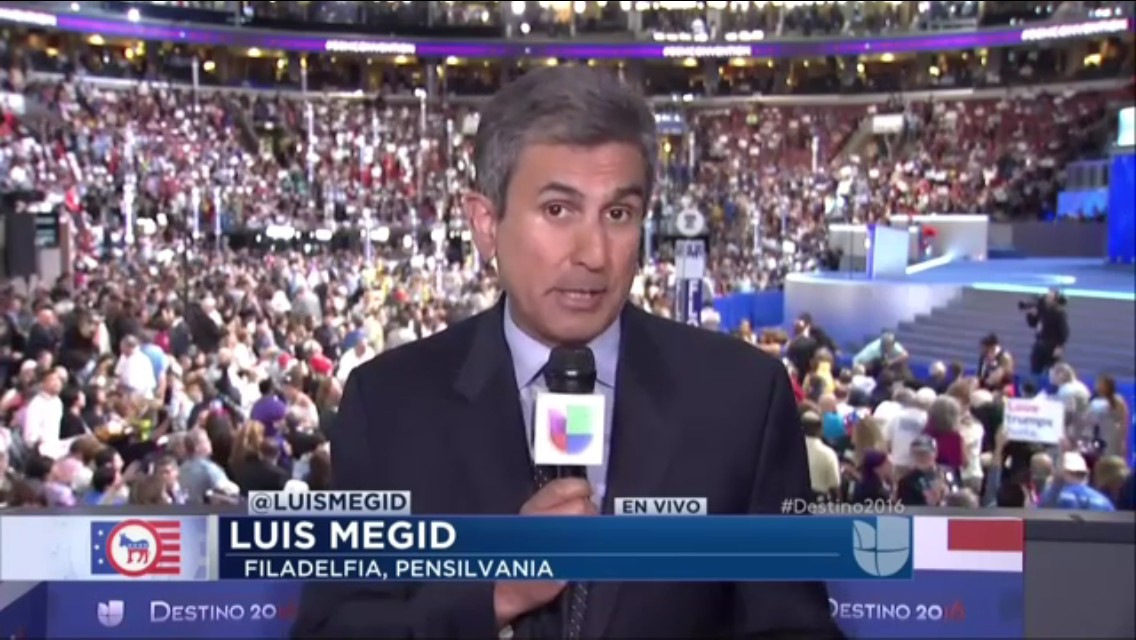 Media bias manifests itself in a number of ways. More often than not, bias is self-evident when examining the framing of a story. On other occasions, bias presents when determining which facts are presented and which are cast aside, brushed over, or omitted. And sometimes, bias is revealed via a gross misrepresentation of fact. Today we will examine a glaring instance of the latter.

Univision reporter Luis Megid, better known for traipsing through crime scene tape in order to be among the first to enter the home of the San Bernardino terrorist, filed a report on the happenings of the Democratic National Convention in Philadelphia, which aired on Monday's Noticiero Univision.

The story itself is an unremarkable contrast piece on the perception of diversity between the two nominating conventions, very much in line with the narrative to come out of Philly. But in the process of establishing that contrast, Megid made a glaring misrepresentation of fact:

LUIS MEGID, UNIVISION REPORTER: The contrast with the Republicans goes beyond the speakers' list. At the convention that nominated Donald Trump, there was just one person that worked with Hispanic media. Here in Philadelphia, there are over thirty.

It is true that the RNC had one Director of Hispanic Media. This would be Helen Aguirre-Ferre, former Univision analyst and radio host whose full former relationship with Univision remains undisclosed by the network. However, it is simply false to suggest that Helen worked alone. As many as two dozen surrogates and policy-specific analysts were available to work with Spanish-language media. Megid could have achieved a better understanding of the RNC's Hispanic media operation by simply watching his own network's coverage of the convention, where several of these surrogates appeared in addition to Aguirre-Ferre over the course of the convention.

But Megid, unencumbered by such inconvenient things as facts, presses on with the lazy narrative that the Republicans had no one in place to work with the media. Megid further bolsters this material misrepresentation of fact by interviewing Aguirre-Ferre's Democrat counterpart, who of course boasted of wide availability of persons to work with Spanish-language media.

In fact, not only is Megid wrong- he's got it upside down. This much was made clear by revelations from Wilikeaks' recent DNC release- specifically, the email in which DNC officials complain to each other about their inability to feed hit pieces to Buzzfeed's Adrian Carrasquillo. Part of the complaint stems from the fact that the GOP seems to have (proportionally) twice as many surrogates as the Democrats do:

The GOP establishment has more than double the number of Hispanics we do proportionally and more than that in real numbers.

GOP-side there are over a dozen reliable Latina operatives who pitch, staff, spox, selfie, follow-up quickly and attentively with their every request. He’s a hero over there. To wit — to him, he has exactly zero reasons to play nice with us. Make sense?

Of course, to report accurately on Hispanic media engagement at the RNC would have entailed breaking the narrative, and showing Hispanics that there is -at least- an interest in engaging the community on the GOP side, as opposed to taking it for granted on the Democrat side.

Facts can be stubborn things.