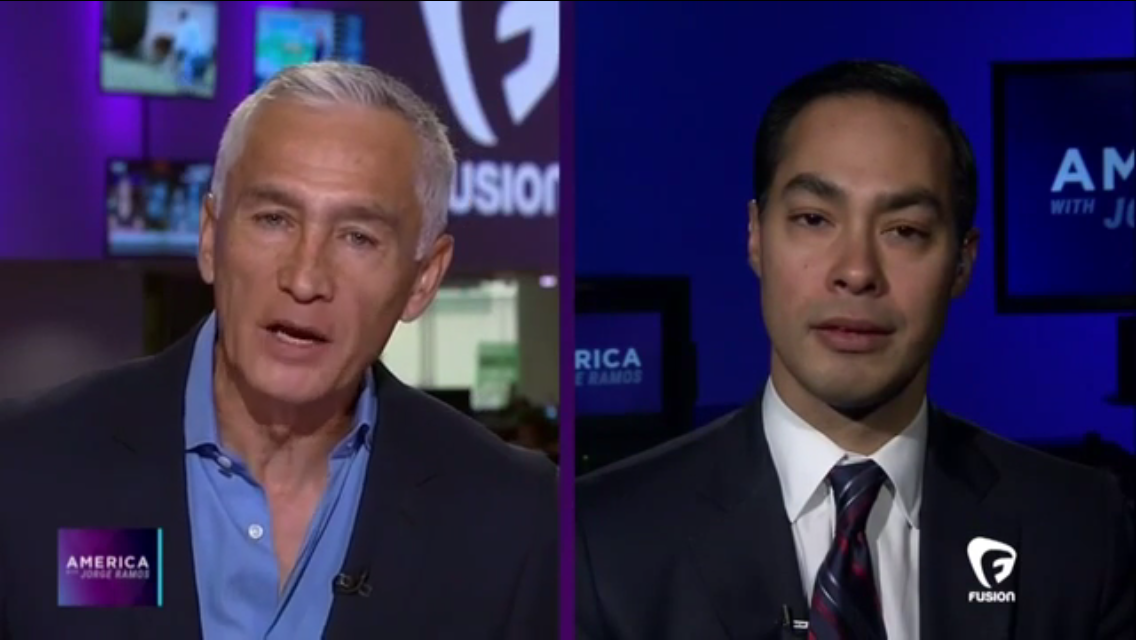 Presumptive Democrat nominee Hillary Clinton hasn't even chosen a running mate, nor is the process open to a vote. That hasn't stopped Univision from clearly voicing its choice for Vice President: Julián Castro, former mayor of San Antonio and current Secretary of Housing and Urban Development.

Here's Castro at his most recent interview with Jorge Ramos for Univision and Fusion, as he attemps to show that he has what it takes to be Hillary's VP in the most traditional manner: by attacking the other party's nominee.

JORGE RAMOS, UNIVISION/FUSION ANCHOR: So, let's talk about Donald Trump. Are you afraid that he might win?

SECRETARY JULIAN CASTRO (HUD): More and more Americans are seeing what kind of a fraud Donald Trump is, and he's shown himself in this campaign not to be someone that unites Americans, but someone that divides them, ah, somebody who has called for a religious litmus test, a ban on Muslims, obviously has insulted immigrants, has mocked at the disabled, he has scoffed at POWs, so it's very clear that Americans understand that he's just not fir to be President. In fact, I saw a poll the other day that said that over 60% of Americans believe that he's unqualified to be President.

None of this is anything new. Univision's been pitching the idea of Castro as a vice president-in-waiting (Crown Prince Julián, if you will) for a long time. This effort started with María Elena Salinas' introductory interview back in 2012, on occasion of his coming-out speech at the Democratic National Convention and has continued since.

Of the Democrat vicepresidential shortlisters, Castro has received the most Univision airtime, with Tim Kaine a far-distant second. In fact, I don;t recall seeing any of the other alleged shortlisters on Al Punto, whether Labor Secretary Tom Perez (who, unlike Castro, can actually speak policy Spanish), Senator Cory Booker, Senator Elizabeth Warren, or Governor Deval Patrick. None of them have benefitted from the kind of exposure bestowed upon Castro. Certainly, none of them is getting prime exposure in the run-up to either of the party conventions, whether Republican or Democrat.

While Castro may lack a vice presidential resumé, there is no denying that he has a "look". He's young, comes from Raza royalty, and comes from a state that must be flipped blue in order to establish lasting Democrat dominance.

But Castro's monster push may be all for naught. As Buzzfeed's Adrian Carrasquillo reports, Castro has been found to be in violation of the Hatch Act due to an interview he granted to Katie Couric back in April.

Perhaps Univision is going to have to find itself a new crown prince.