It is not often that Univision News features a master class on how to smash tired racial grievance narratives, but that's exactly what happened on Sunday's Al Punto. Anchor and activist-in-chief Jorge Ramos, caught right in the middle between his anchor and advocacy roles, could only watch helplessly. 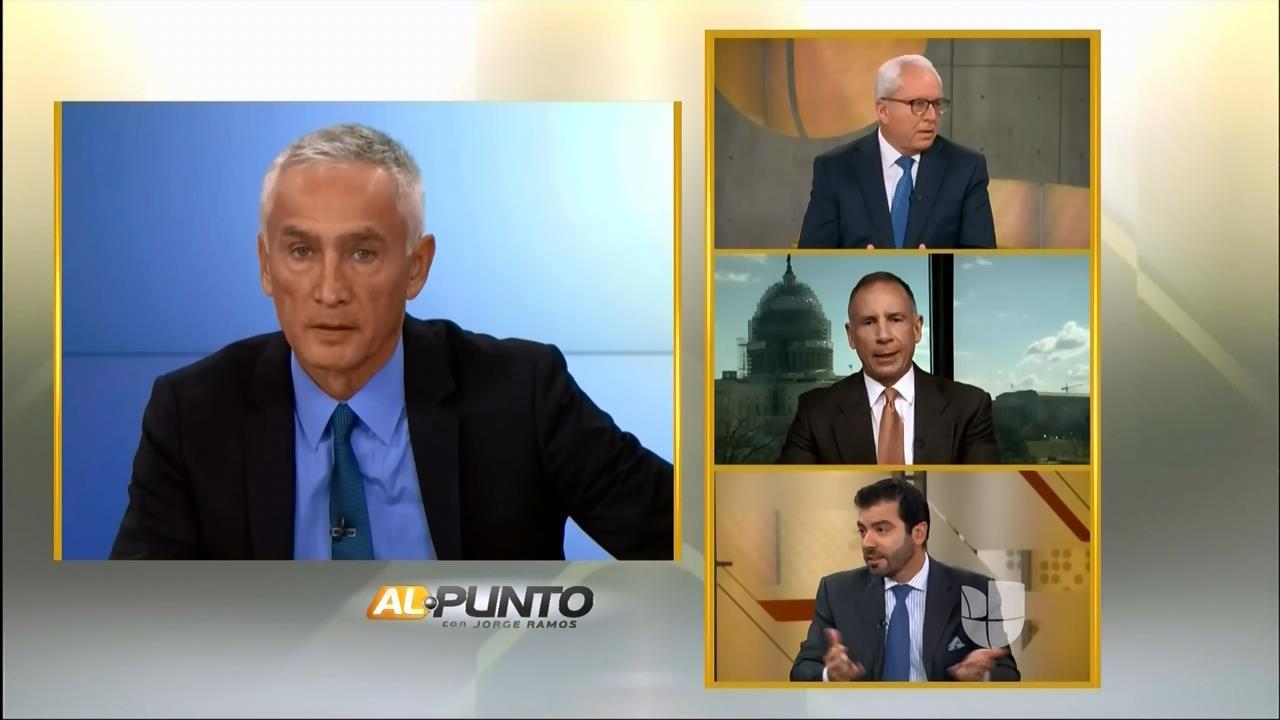 Ramos opened Al Punto by attempting to legitimize the disgusting op-ed published by the New York Times in the wake of the historic result of last week's Iowa Caucuses. It should be noted that when Ramos set up the NYT op-ed as "a very interesting story",  he cravenly omitted the fact that his own odious race-treason article was cited as the authority upon which rested the op-ed's central premises.

The panel featured Democrat Freddy Balsera, and Republicans Adolfo Franco and Otto Reich. When you factor Ramos, this adds up to an even panel.

Balsera dutifully took Ramos' first softball and dished out a steaming pile of racial vitiation against Ted Cruz and Marco Rubio, charging both with being "anti-Hispanic" and "anti-immigrant". The evidence offered to support that claim is that they both built a base of support beyond the community (unlike, say, Luis Gutiérrez - whose district consists of the Puerto Rican neighborhood, the Mexican neighborhood, and the stretch of interstate that connects the two), the claim that they don't grant interviews to the network (false), and the charge that Cruz doesn't speak Spanish (which didn't stop the network from anointing Julián Castro).

Reich responds by noting the Times' anti-Cuban-American bias, the fact that they've been wrong on every major issue of the last fifty years, and by making a distinction between being anti-immigrant and pro-law enforcement. Franco then comes on and drops a truth-bomb so lethal that Ramos had no choice but to try and interrupt.

ADOLFO FRANCO, REPUBLICAN ANALYST: What's happening with the New York Times, Jorge, and with the leftist media in general, is that they want to reserve the position for a Democrat. Like they did with the Supreme Court, when they rejected the nominations of George W. Bush.

Franco cut to the bone by linking the ethnic vitiation of Ted Cruz and Marco Rubio with that of Miguel Estrada, the Bush judicial appointee filibustered by the Democrats solely on ethnic grounds. Had Estrada been confirmed, he would likely have been the first Hispanic appointed to the Supreme Court instead of liberal Sonia Sotomayor. Estrada's major sin, like Cruz and Rubio, is that he rose without being beholden to La Raza, Hispanic Media, or to any of the other various other professional Latino grievance groups. This is the hypocrisy that Franco so brilliantly laid out for all of Univision's viewers to see.

Franco again smashes Ramos and Balsera after suggesting that opposition to open-borders policies and runaway "social programs" is anti-Hispanic and anti-immigrant.

ADOLFO FRANCO, REPUBLICAN ANALYST: First thing, to clarify in this program with Univision and with all the media. Our party, as much Marco Rubio as Ted Cruz, first they are not 'anti-Hispanic'. They certainly are Hispanic. But they are in favor of immigration, What they're not in agreement with is with the people who arrive to this country illegally. and this question of 'anti-immigrant', it's nonsense to say that. Because no one is 'anti-immigrant.' Yes, they are opposed to uncontrolled immigration.

Reich then went on to note that then-Senator Barack Obama put a (pro-union) poison pill into the bipartisan Bush comprehensive immigration reform bill, which effectively killed the legislation, that Obama failed to deliver on his campaign promises on immigration, and that it is the Democrats who continually view immigration as little more than campaign fodder. Franco then hammered Ramos and Balsera on the 'anti-immigrant' rhetoric, leaving them no choice but to retreat from the 'anti-immigrant' talking points, and (in Ramos' case), fall back on emotional arguments about tradition.

The last humiliation came in response to Ramos' question over whether Latinos would vote for Latinos based solely on ethnic origin. After Balsera delivered the liberal line, Franco pointed out the non-existent Democrat Hispanic bench ('who do you have that is elected statewide beyond Senator Menéndez?') and contrasted that with the many options on the GOP side. Reich then reminded everyone that Hispanic voters are not as shallow as the Left expects (or needs) them to be.

FORMER U.S. AMB. OTTO REICH: Fortunately in our democracy, people don't vote based on skin color or ethnic origin, as it ought to be.

Rather than acquiescing to liberal narratives on race and immigration, Franco and Reich pushed back - engaging forcefully, relentlessly, and substantively. The disgusting NYT op-ed and its liberal promoters at Univision and elsewhere deserved no less.