After watching anchor Jorge Ramos’ complete interview of Senator Ted Cruz (R-TX) on Fusion, I immediately began to speculate as to which parts would be left on the cutting room floor during its Sunday rebroadcast on Univision’s Al Punto. It didn’t take me long to find out that I was right.

The interview itself was classic Jorge Ramos. The hectoring tone and constant interruptions, the moral equivalencies and straw man arguments, the forcible empathy via personalization, as well as the willful distortions of the constitutional process and rule of law in the United States - these were all present. In this particular instance, Ramos dedicated much of the interview to an attempted same-sex marriage victory lap around Cruz, who was having none of it. Once Cruz shut that line of questioning down, the interview inevitably reverted to familiar themes of immigration advocacy and racial disqualification.

Al Punto’s viewers only got to see the first minute or so of the Cruz-Ramos gay marriage slugfest. On Fusion, the topic took up seven minutes of the full 19-minute interview. On Univision, the entire interview was edited down to 9 minutes. The original exchange on the topic of the redefinition of marriage actually probably went longer, given that Cruz was abruptly edited halfway into his epic “you guys talk about sex, I talk about the Constitution" schooling of Ramos. 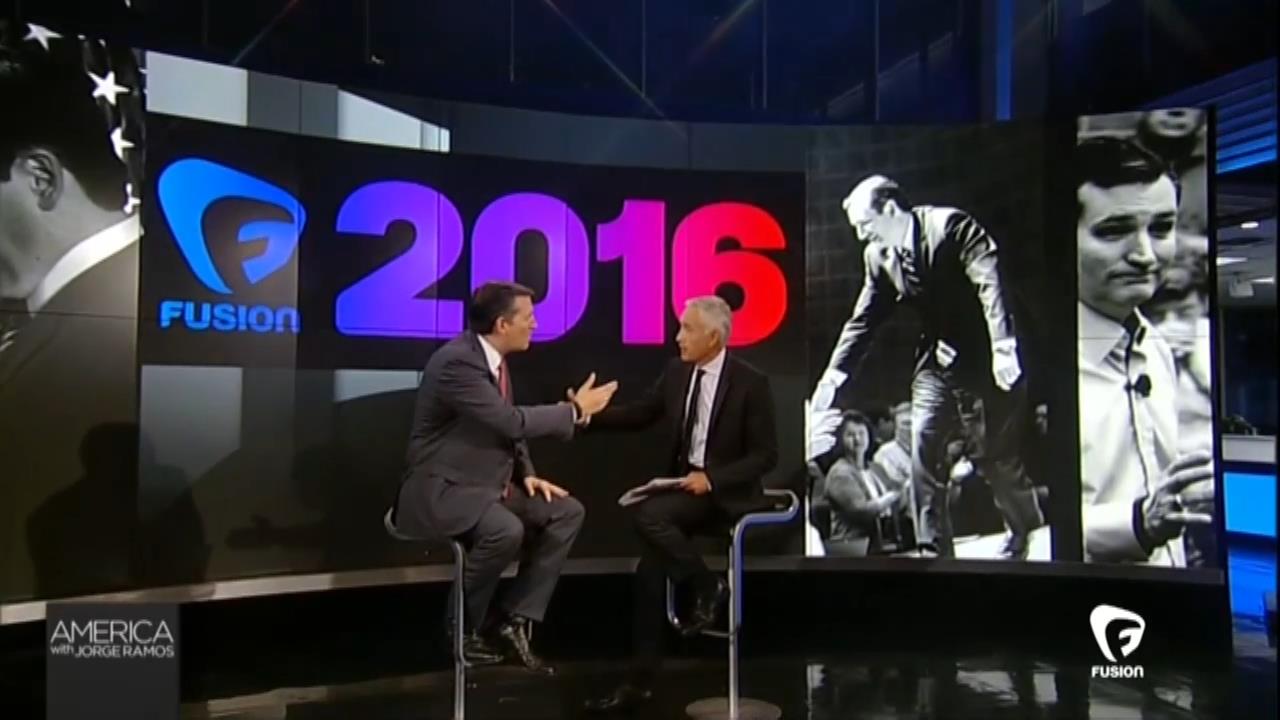 Al Punto’s viewers should also have been able to see firsthand Ramos’ contempt and condescension when attempting to lecture Cruz on matters of constitutional law.  Al Punto’s viewers were cheated out of watching a frustrated Ramos quickly go to the bottom of his bag, having exhausted all his other lines of argument, and attempt to stun Cruz with the lesbian daughter hypothetical.

One wonders why the entirety of this exchange was deemed appropriate for Fusion’s smaller number of viewers, but not for the many more that the ratings indicate tune into Al Punto every Sunday. Such a decision would seem to bolster Cruz’ assertion that support for same-sex marriage is considerably more pronounced among Latino media than it is amongst its audience. Does the network not trust that its viewers will embrace Univision News President Isaac Lee’s defense of a “society that promotes fairness and equality” and subsequent Nazi treatment of those who dissent from trumpeted new dogmas?

Another exchange that didn’t make it to Al Punto, tellingly, was Cruz’ Tía Sonia (Aunt Sonia) story. It was a brief part of Cruz’ narrative, but one that most – if not all Hispanics – can relate to.

TED CRUZ: My Tía Sonia actually fought in the counterrevolution, against Castro.

TED CRUZ: Yes, oh, no, no. She would wear flip-flops, or chancletas. And my Tía Sonia, my cousin Bibi, and I - Bibi's her daughter. We would be getting into trouble, and my Tía Sonia could pull the chancleta off and at 20 feet, toss it, BOOM! Wack you in the back of the head and drop you down on the ground.

Most Hispanics have an Aunt Sonia in their families. But such relatability, of course, flies in the face of an institutional attempt to cast conservatives as inauthentically Hispanic…which is why, again, only Fusion’s viewers got to see that exchange.

The rest of the interview devolved into Ramos’ usual immigration advocacies, his insistence on a pathway for citizenship for the millions of illegal immigrants living in the United States, and the network’s whitewashing of President Obama’s horrible Hispanic record. Univision, in fairness, ran Cruz’ full rebuttal, including his remarks regarding immigration, the historically low labor participation rate among Hispanics, and his strong challenge to the national Hispanic media in general.

SENATOR TED CRUZ: The media, the Latino media I think doesn’t give Republicans or Conservatives a fair shake.

JORGE RAMOS, HOST: We’re talking. We have all the time in the world to talk to you. We talk all the time.

SENATOR TED CRUZ: But, look. You and I have had the opportunity to talk, but what I’m pointing out is when I’m not on the show. What's covered in the news on a daily basis. The story that is told has a political agenda.

JORGE RAMOS: Not really. People are fearful that you might be deporting a lot of people. That’s the concern.

SENATOR TED CRUZ: For example, Jorge. How many discussions have you all had on air, that in the last six and a half years, the Hispanic community has been profoundly hurt by the Obama economy? Hispanic unemployment has gone up, Hispanic teenage unemployment has gone up. We have the lowest percentage of Americans working today, in any year since 1978. Median wages have stagnated, they're the same as they were 20 years ago.

When watching both segments side by side, it is clear that Univision edited and condensed the interview with Ted Cruz in a manner intended to cast him in a light most unfavorable with Al Punto’s viewership. Furthermore, the network did so by omitting segments highly relevant to its audience.

Conservatives attempting to engage Hispanic voters should know better by now. Do engage the network, but resist its narratives and talking points (as Cruz masterfully did). And then engage the community on your own. Anything else is political malpractice and suicidal folly.