As we all know, MSNBC is painstakingly conscientious to avoid showing any depiction of Islam's Prophet Muhammad, out of a profession of cultural sensitivity and a desire to avoid needless offense to practicing Muslims.

But when it comes to Christians who object to taking the Lord's name in vain, well, that's a different story apparently. Witness the May 14 -- which happened to be Ascension Day -- All In with Chris Hayes where, in a taped segment in which Hayes was shown going through a police-training shooting drill, the MSNBCer let slip the vain invocation, "Jesus Christ!"

Of course MSNBC failed to bleep the imprecation.

Hayes, who was raised Catholic and whose father at one point studied to be a Jesuit, should clearly know how offensive yelling "Jesus Christ!" is to Christians. From the Catechism of the Catholic Church:

2146 The second commandment forbids the abuse of God's name, i.e., every improper use of the names of God, Jesus Christ, but also of the Virgin Mary and all the saints.

2148 Blasphemy is directly opposed to the second commandment. It consists in uttering against God - inwardly or outwardly - words of hatred, reproach, or defiance; in speaking ill of God; in failing in respect toward him in one's speech; in misusing God's name. St. James condemns those "who blaspheme that honorable name [of Jesus] by which you are called." The prohibition of blasphemy extends to language against Christ's Church, the saints, and sacred things. It is also blasphemous to make use of God's name to cover up criminal practices, to reduce peoples to servitude, to torture persons or put them to death. The misuse of God's name to commit a crime can provoke others to repudiate religion.

Blasphemy is contrary to the respect due God and his holy name. It is in itself a grave sin.

2155 The holiness of the divine name demands that we neither use it for trivial matters, nor take an oath which on the basis of the circumstances could be interpreted as approval of an authority unjustly requiring it. When an oath is required by illegitimate civil authorities, it may be refused. It must be refused when it is required for purposes contrary to the dignity of persons or to ecclesial communion.

It's not just Catholics, of course, who would have a problem with taking the name of Jesus in vain. From the Heidelberg Catechism in the continental Reformed tradition:

99. Q. What is required in the third commandment?

A. We are not to blaspheme or to abuse the Name of God by cursing,[1] perjury,[2] or unnecessary oaths,[3] nor to share in such horrible sins by being silent bystanders.[4] In short, we must use the holy Name of God only with fear and reverence,[5] so that we may rightly confess Him,[6] call upon Him,[7] and praise Him in all our words and works.[8]

My point is not so much against Hayes for letting his imprecation slip but rather in him and his producers not bleeping it after the fact while editing the taped segment.

Of course there's virtually zero percent chance that Christians are going to wage holy war against Hayes for profaning the name of Jesus Christ, whom all Christians believe and confess to be divine. But MSNBC's official line after the Charlie Hebdo terror attacks regarding Muhammad was not "we fear for our lives" but rather than showing such cartoons was to risk that doing so "could be viewed as insensitive or offensive."

[see MSNBC screen capture from January 8, 2015 edition of All In below] 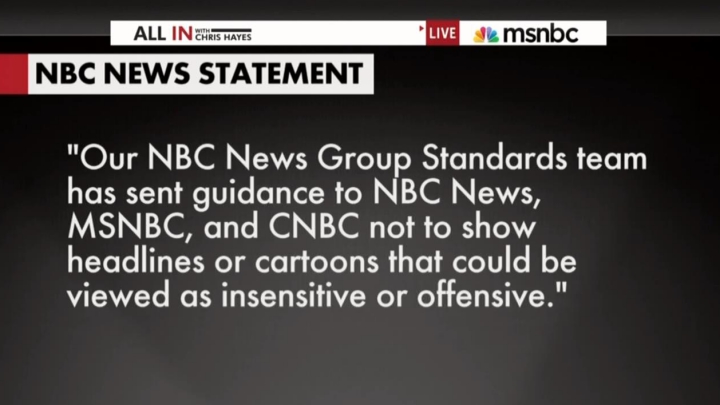 Obviously from context most folks would have a good guess as to what Hayes said even were it bleeped out, but at least bleeping out the words would show the network extended some deference to the religious sensibilities of practicing Christians and wished to communicate that Hayes's verbal slip, however understandable, is not appropriate for broadcast.