According to MSNBC pundit Michelle Bernard -- best known at NewsBusters perhaps because of her insistence that there is a "war on black boys" in America -- savaged newly-announced GOP presidential aspirant Dr. Ben Carson tonight by alleging his success is all owed to "affirmative action." She also suggested that he's a disgrace to his enslaved ancestors and to the black community in Baltimore, where he's lived throughout his career as an acclaimed neurosurgeon.

Bernard made her remarks in the midst of a segment with Matthews, Huffington Post's Howard Fineman, and National Journal's Ron Fournier devoted to trashing Carson, Carly Fiorina, and former Arkansas Gov. Mike Huckabee as extremists. Here's the relevant transcript:

MICHELLE BERNARD: It is absolutely horrifying. You take one look at him and you say to yourself, well, your ancestors didn't come here on their free will, so how is the Affordable Care Act in any way comparable to slavery? Ben Carson and Carly Fiorina have the same problem. People are going to say, who is the real Ben Carson? The person who probably went to Yale and University of Michigan for medical school because of affirmative action and because of social problems and didn't end up like many of the black men that we see in prison today in Baltimore, where he came from, because of these same social problems.

Earlier in the segment, Hardball host Chris Matthews got his digs in at Carson, wondering if he "banged his head" along the way somewhere. For her part, Bernard suggested Carson "drank the kool-aid" in an attempt to ingratiate himself to Obama-hating conservatives:

MATTHEWS:  Michelle, there is more of this to come in this segment. It's just the demonization of a president you happen to disagree with who may be far left of where you are, but he's not the devil. 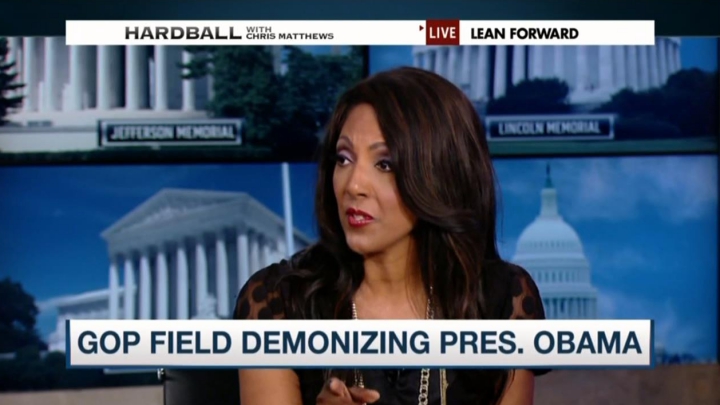 BERNARD: He's not the devil, and it is so surprising, particularly coming from Ben Carson, who quite frankly--

MATTHEWS: What happened to him?

BERNARD: -- in the African-American community and elsewhere --

BERNARD: He drank the kool-aid.

BERNARD: He has the pull-yourself-up-from-the-bootstraps story. Conservatives said we love you and he thought, "Oh, they love me, so now I'll just say everything negative I can about Barack Obama." It's horrible.